a History of Mojácar 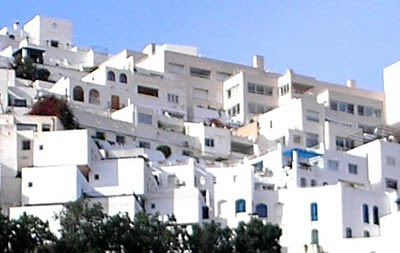 Mojácar comes from the Arab name ‘Muxacra’, which comes from the Roman name ‘Mons Sacra’. This ‘sacred mountain’ refers to a pyramid shaped hill which is just below the current site of the town. The hill, now known as ‘Old Mojácar’, has an Arab water deposit on its summit, innumerable ruins on its approaches, bronze age remnants about its feet and the dry river ‘Aguas’ to its rear. 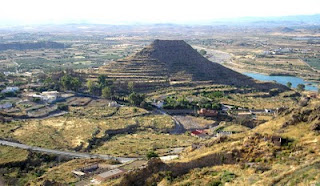 The Lord of the Flies

The weather has been strange this year, with more rain falling here since Christmas than you could experience on a long Irish weekend. It’s either something fairly terminal to do with the global warming or, just possibly, a situation caused by my own foolishness. A few months ago I finally installed an automatic drip system in the garden. It’s rained off and on ever since.
Whatever the cause of all the rain, the result is the same: more mosquitoes than ever. The town hall claims that they have been out spraying with some miracle product but, as anyone could tell them, if it’s available, it won’t work. You might kill the odd fritillary, causing the Green Party to swell its ranks to unseasonable levels; thus propelling ever more eccentric rules through Brussels and bringing down the World As We Know It. The mosquitoes, though, are impervious.
Anyway, the last few days have been hot, too hot to mess about with spraying.
The mosquitoes approach, whine briefly about your head for entirely dramatic reasons, and then settle on an exposed bit of skin. Fifteen minutes of itching being quite enough to keep one awake – anticipating the next bite.
I use a plug-in device called Fogo which more or less keeps them down, apart of course from the gung-ho types that thunder determinedly through the window, without a word of advice, and manage a quick meal before the cloud of blue gas whacks them. How bad it may be for humans is a question for another day, although it’s rumoured to be made out of the same stuff that Saddam was meant to be hiding in his umbrella tips. The dog has certainly developed a nasty cough and now sleeps upside-down on the ceiling.
This aromatic insecticide doesn’t stop flies though. Nothing, during daylight hours, stops flies. They seem to take over duty from the mosquitoes while managing, somehow, to be even more irritating. The mosquito, dispensing vile and fatal disease with every bite, at least has a point to it. You can look on it fondly as a kind of tax for the thousands of benefits of living in southern Spain. A shot of blood in payment for the good life. The fly though, has no reason at all. It doesn’t eat any of your spare bits, unless you happen to be seriously considering death. It just likes to sit on you and brush its feet. Which – as it must know - is very irritating. There is never two of them brushing away on your nose, always just the one. If you manage to flatten it, which takes reactions on a level with Schumacher’s, then the next one will come along and do duty. Why not two today in exchange for none tomorrow?
The Chinese are well known for killing flies with their trusty Mao-swats. Ten flies a day or a spot of re-education, was, I understand, the rule for many years. It must have been fun: ‘I saw it first, Mrs Lo’. Fly-swats are immensely satisfying things, after all, except for the mess they leave: and the fact that, until October, it’s Too Bloody Hot to go whacking away at flies…
There was once a rather graphic campaign about cleanliness in restaurants, which went something like ‘…and the fly lands on the food and regurgitates a small dollop of its stomach full of digestive enzymes onto the meat to liquefy it. It stamps the vomit well into its food before sucking up the resulting cocktail back inside with its proboscis. Bliss! Then it's your turn…’.
So the only thing to do is to wish upon a star, or rub a bottle with a genie in it. Please Mr Fairy, make all the flies go away. I don’t care about those beautiful creatures that rely for their survival on flies, like swallows, trout, lizards, frogs and fly-swat salesmen, it’ll be worth their passing into history just to see the flies go.
You have to be a bit careful with genies, of course. I saw a fellow yesterday who had had a run-in with one. He had obviously asked for gold. He was wearing two ear-rings, a heavy necklace, bracelets, rings, all made from gold, plus a Rolex watch. He was standing in front of me in the supermarket, bare-chested and with a rather droopy looking family. Perhaps he was happy, although his wife was staying carefully just out of reach. She had a slightly glazed look of approaching panic about her.
Flies are the most wretched of creatures. They are the Volkswagens of the insect world, boring, ubiquitous and charmless. I recently found a giant moth on the terrace, about three inches long, black and brown and with a death’s head design on the top of its thorax. This particular strain is the largest moth in Europe. If you pick one up, it will let out a tiny scream. I showed it to the children who were all captivated apart from one lout who kept a respectable distance and said, ‘does it bite?’. A moth? It sucks nectar down its long hollow tongue while flying in front of a flower (it weighs too much to settle). A few years ago, there was a ‘plague’ of these giant moths in some town in the interior of Almería. The newspaper write-up on the event was entitled ‘The curse of the monster flies’.
Flies in ancient times materialised from thin air. They popped into existence, jus’likethat. The Lord of the Flies, Beelzebub, another name for the devil, was responsible for them.
So I am getting tired… but I must wait until dark… and the arrival of the mosquitoes, the night-children.
Posted by Lenox at 11:30 PM No comments:

I’m sat in our office, a converted bedroom I suppose in our rather large house. It’s the kind of house that wanders slightly, one room decants indecently into another. Small windows and thick walls keep it cool. There was never any architect involved with this house, so the ceilings are a bit too high and no one can say for sure just how many bedrooms there are.

Which is why it was easy making this particular one into an office. There’s even a single bed in here in case I get lost and need a rest.
Only, the dog usually gets there first.
The walls of this room are heavily decorated by paintings, as is most of the rest of the house, even the kitchen, as artists have always been welcome here. Paintings are useful to cover the walls and add a mood to a room, but an old farmhouse in the campo has another secret reason for hanging posters, canvases and sundry other memorabilia on the heavy walls. This is to do with the small creatures that live behind the paintings, scampering sure-footedly from one to another or calling for a mate with a small series of amorous belches.
The local Spanish think that they are dangerous in some obscure way and have little time for them, but the ‘salamanquesas’ or geckoes are fine little fellows. They eat the flies and the mosquitoes. One has just galloped along the wall in front of me, ignoring the fact that it’s vertical, and has harvested a slightly surprised looking daddy-long-legs.
Sometimes they attract the attention of the cats, or one of the two duendes that live in the secret spaces between

the walls of this house. The duendes are the ‘little folk’ that torment the innocent. We leave bits of bread and milk out for them and they generally leave us alone. When a gecko is faced with real danger, he will release muscles in his tail which will obligingly fall off and wriggle for a while, allowing – with luck – the more important bit of the creature to scamper back behind a handy landscape. So, some of our lizards have a missing tail, or are in the process of growing another one.
So, the geckoes and I help each other out. I attract the mosquitoes and they keep the duendes amused.
Posted by Lenox at 9:00 PM 1 comment: 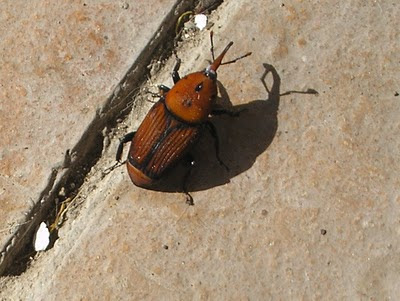 According to the ever-faithful Wikipedia, 'The red palm weevil, Rhynchophorus ferrugineus, is a species of beetle. It is relatively large, between two and five centimeters long, and a rusty red colour. Its larvae excavate holes up to a metre long in the trunk of palm trees, and can kill the host plant.'
This nasty beetle comes from Asia and has been working its way towards Mojácar since the eighties. Well, here's one that made it here this morning. It is about an inch long and was marching up our palm tree with a hungry glint in its eye. It flew off after having its picture taken, but it got a snoot-full of bug spray before the photo-shoot so its mischief should be at an end.