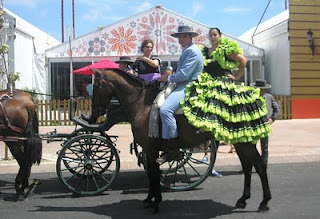 which lasts the usual eight days. Give the Spanish their due, the bigger the town (or the town's coffers), the longer and jollier the Saint's Day becomes. A few years ago, Almería would run to ten days of party, concerts, fun fair and bullfights, but now with the recession ('¡ay!').
Yesterday's opening at what is known as the 'feria del mediodía' went on as these things do, for several hours with horsemen and carriages going up and down the main street of the fairground, while showing off, passing the day, drinking and being photographed by me and a few others. There was no particular focus, or formal parade, just people dressed to the eyeballs doing their 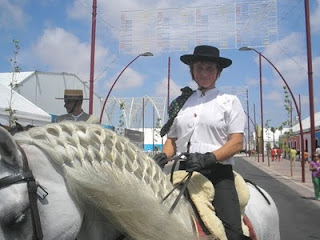 piece. The gentlefolk and the gypsies were immediately identifiable with their different customs and characters. I went off and had a beer in one of the stalls while they got on with it - a beer and a tapa (Almería is famous for having the best and biggest tapas - a small plate of fingerfood - in Spain). The fairground fills up later on, after the bullfight in the bullring at the other end of the city. Yesterday, it was a special with rejoneadores, mounted bullfighters, which is a sight to see. One family we met at the horse event was carrying on to the bullfight (7.00pm) and then back for a late night thrash at the fair.
Did you see the lady riding side-saddle... and the work in Loli's horse's mane? 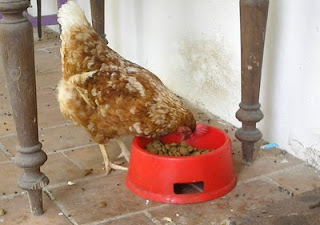 I think there used to be a sort of super-chicken on the cartoons, he would roll up the feathers on his arms and say something like: 'I mean i'm gonna, I say, I mean I'm gonna knock you down'.
Anyhow, and since I can't afford a holiday this year and tell you about my adventures at the Zoo in Paris, here's a picture of our rather pugnacious chicken, which runs all the animals in the Yard (except my son's girlfriend's dog, which had gone for a walk when this picture was taken). The reason for her strength, a kind of fowl version of the Popeye legend, is because she eats dogfood.
The eggs are tasty, mind.
Posted by Lenox at 5:59 PM No comments: 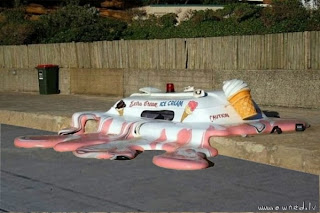 There was an article in the paper a few days back about how seventeen countries across the world have reported the hottest July on record (well, we include the Solomon Islands, but you get my drift). Moscow is as hot as Madrid and chunks of the ice surrounding Greenland are breaking off the glaciers, floating away south with a few startled penguins on board and, presumably, melting. The sea has already risen a milimetre.
We shall be on the front-line of the playa one of these days if this keeps up.
It has been horribly hot this summer, although we have been spared any 'brush-fires'. The house has thick walls and small windows and has a terrace designed to catch any spare breath of wind. Even so, we have to sleep in front of a fan and I wrap a towel around my pillow to keep comfortable. It is worse inland, away from the coast (one town, Écija, reporting 48C the other day), which is why most people would like to live near the sea and why the 'Ley de Costas', Spain's mad coastal law, will be reviewed by the government this autumn.
Then... last night... it rained. The temperature fell a few degrees and a slight wind started up. I could hear a slight groan of pleasure from the garden as the first drops fell. Perhaps we'll make it though the summer after all.
Posted by Lenox at 9:29 AM No comments:

I am reading an old book about the Barbary Pirates that used to terrify the coastal villages of Southern Spain. Mojácar, for example, was built on a high hill a kilometre inland, with a good escape route up the mountains behind, in case of attack.
The pirates, following on from the traditions of Islam, together with a sense of outrage after the Fall of Granada, were based in various port cities along the ‘Coast of Barbary’ in North Africa, primarily Algiers, Tunis and Oran. They were a loose alliance of North African Moors and Turks from the Ottoman Empire and they preyed on European shipping and coastal towns, with their attacks stretching as far north as Ireland, England and even Iceland in search of slaves or ransom.
The corsarios lasted well into the early nineteenth century and Wikipedia notes – ‘Pirates destroyed thousands of French, Spanish, Italian and British ships, and long stretches of coast in Spain and Italy were almost completely abandoned by their inhabitants, discouraging settlement until the 19th century. From the 16th to 19th century, pirates captured an estimated 800,000 to 1.25 million Europeans as slaves…’. Another fragment from the same source is interesting: 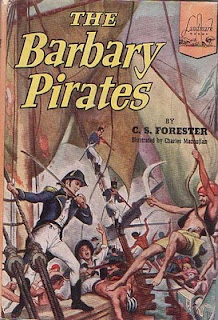 The Americans fought two ‘Barbary Wars’ (1801 – 1805 and 1815) after ‘Payments in ransom and tribute to the Barbary states amounted to 20% of United States government annual expenditures in 1800’.
It gives a better idea of the importance of the old stone towers along our stretch of the coast to warn the local people of sightings of pirates.
The book, in old English print, refers to the treaties at the time between various European states and the Dey of Algiers (1719), with the latter saying ‘that the Barbary Corfairs, being born Pirates, and not able to fubfist by any other Means, it was the Chriftians Bufinefs to be always on their Guard, even in Time of Peace’. The book is called ‘A Voyage to Barbary for the Redemption of Captives’ and tells of how monies were collected by a French charity in 1720 to sail to Algiers to ransom as many Christians as they might. I have just read of how a French ship had been taken off the coast of Barcelona by Ottoman Turks the year before and towed towards Algiers only to be sunk in a storm off Morocco and how one ten-year-old French-girl was sorely treated by the local mountain-men before being ransomed to Algiers, to be ransomed in turn back to the French.
The French expedition eventually returned (in 1721) to Marseille with 62 'Slaves' bought from Algiers and a further 45 from Tunis.
Posted by Lenox at 9:46 AM 1 comment: