Eve and the Trippers

I was in our local cemetery, where the foreigners at last lie in peace with their Spanish neighbours. Walking around slowly: looking out for my parents, for old friends and for people I knew. Here is the British bullfighter; there the Air-Vice Marshall. Here is my dad. There is my mum. Here's Fritz the artist, who's headstone claims he was born on November 31st, a month with only thirty days. Old Pfeiffer, whose apfelstrudel was all the rage in Vienna, is there: dead these forty years. And then I saw the stone for Eve Steinhauser, who despite her name, was an Englishwoman who worked for Horizon Holidays.
I had also worked for them, briefly, when I was 17; taking tourists round the sites (the sights) in Crete, the old Minoan Civilization. A posh accent describing the Minotaur to retired doctors, bank-managers and their wives. I was at the top end of the tour-operator's offer, a subsidiary of the holiday-company called Wings.
Eve had been sent to Mojácar by Horizon to see if it was worth bringing their holidaymakers to the small resort. Mojácar doesn't really work as a tour destination - it is a pretty village two kilometres away from the sea on a high hill, with beautiful views, and with a long coastline (for all practical purposes) of a dozen kilometres. From your hotel to wherever you wish to walk... is a long pull. There was no bus then although there was a couple of old taxis - we are in the early seventies; but there wasn't much to do after a hot walk, besides take the inevitable tour to the cowboy town in Tabernas an hour away in a coach (cue some Morricone music) or see some dodgy Flamenco in the hotel disco.
So Eve, conscious of the fact that a man who works in a toothpaste factory wants a holiday that won't stop, knew that Mojácar wasn't the right place. There was just one hotel in the village that could work and nothing of any size on the beach.
But then she met my mother.
Heather had suffered from encephalitis some years before she came with my dad and myself to Mojácar in 1966. The scars in her mind were slight, but she had no spacial memory, no recent memory, and she had somehow lost the bit that stops you from being rude to strangers.
One night in the bar:
Eve - I'm here to see if Mojácar is the right place for a tour operator.
Mother - Don't you fucking dare to bring in those arseholes to our town you horrible (and frankly, really quite hideous) woman.
Eve would tell the story (since my mother forgot) - I had quite decided to tell Horizon against coming to Mojácar, until Heather changed my mind.
So, the company came to the village, to turn it into a resort. They bought a second hotel on the hill, a hulk which they were forced to demolish, before rebuilding it alarmingly over-budget. With the new hotel, the Moresco, and the other place above it, the Hotel Mojácar (built with public money by Roberto Puig - a Valencian who couldn't bear the thought of customers in his hotel), Horizon Holidays opened Mojácar, as my mother would say, to the fucking trippers.
Horizon was bringing in tourists, the Mojácar people reacted accordingly. The foreign residents, who had brought in money, bought houses and opened bars, were quickly dropped in favour of the trippers. Nicknack shops opened, and Old Jacinto the mayor changed the name of the main street up to the village from the Generalísimo to Avenida Horizon. 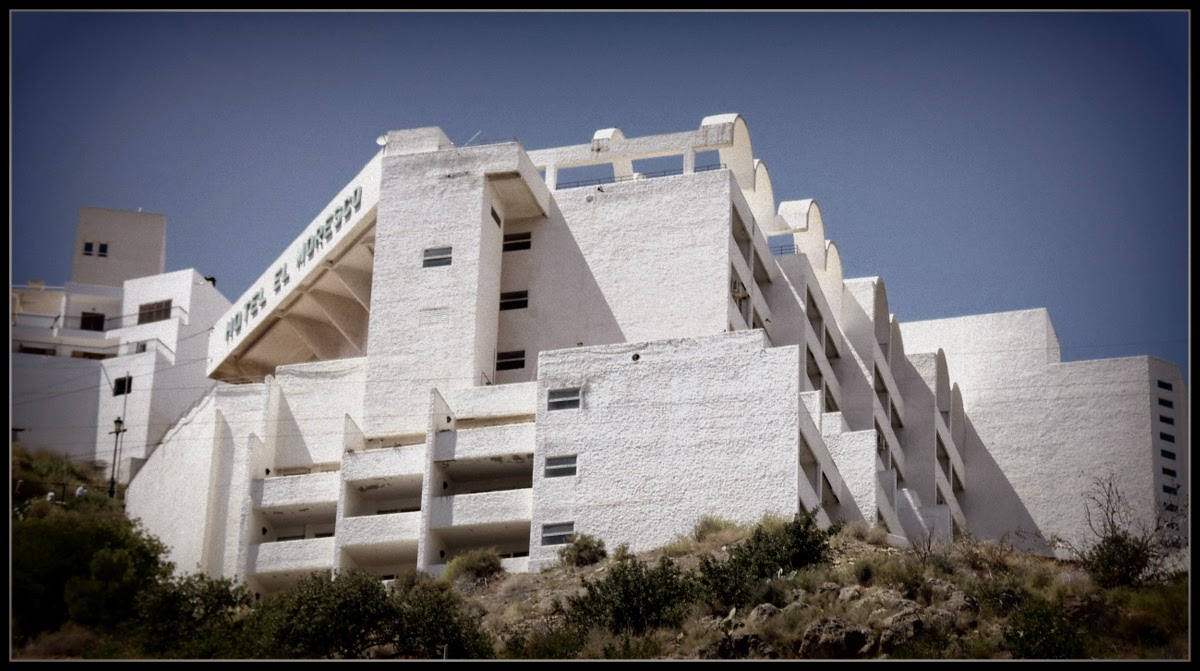 The company, now heavily invested in Mojácar, was allowed to build another hotel, an ugly skyscraper on the far end of the beach: a twelve storey monstrosity called the Hotel Indalo. Shortly after this, as the millions of British trippers insisted on continuing to enjoy their holidays in Benidorm, several hundred kilometres up the coast, Horizon quietly went bust.
Clarksons came and went, as did other tour-companies of the era. Mojácar attempted to sell the tourists (here on a shoe-string holiday) small and squashed-together apartments. No one was buying villas any more.
With an ever-larger presence of Britons in the town, whether living here or merely visiting, it was only a matter of time before we twinned with a tourist town, and where more appropriate than Encamp, the Andorran town famous for its banks with no questions asked. The Avenida Horizon became the Avenida Encamp. The Hotel Mojacar was rebuilt as apartments, the Hotel el Moresco has been closed for several years (never to reopen). The Hotel Indalo is now the Hotel Best and the beach is full of bars, ice cream joints and of course, an unending supply of nicknack shops selling Chinese-made goods.
Benidorm, meanwhile, continues to grow.

The pavement - the bit pedestrians are meant to walk on - is full of trees, parked bikes, dustbins, contenadores, signs, street lights, low-hanging shades, wheeled souvenir stands, metal anti-parking posts, ONCE boxes, benches, marquesinas and... of course... café tables and chairs. No wonder we must walk on the road instead. 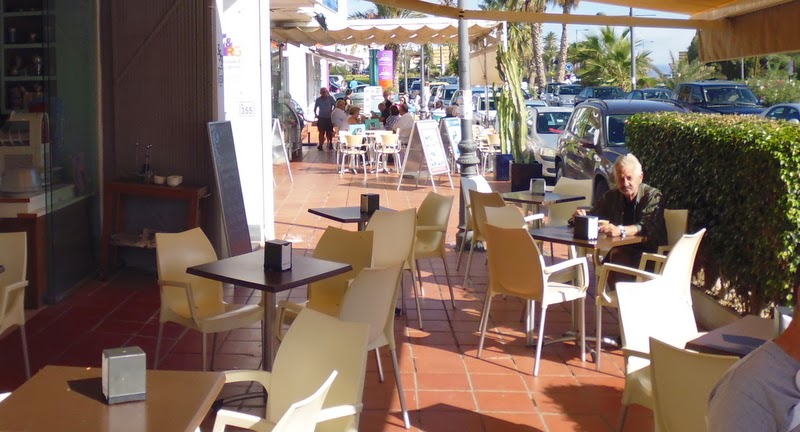 The day will come, if you go to bullfight-school, when you will be called upon to strut your stuff. It will be an expensive exercise, paying for rent on the bullring, paying for your cuadrilla (your crew), their crew, then paying for the hotel, transport, costumes, insurance and... a bull. So, better make it work!

On Sunday, I joined some Spanish friends at the Roquetas de Mar bullring to see a group of young novilleros, junior bullfighters, in a free entertainment for the public. Eight young men from the Escuelas Taurinas de Granada, Córdoba, Atarfe, Jaén, Puerto de Santa María and Almería (who knew there were so many schools?). On Friday and Saturday, there were apparently three more similar sessions with each young man (one was just 14 and he looked it - I saw him in the stands) fighting one bull each. One chance - that's bullfighting! Across the three days, there would have been 32 brave or foolhardy young fellows presenting themselves to the public for the very first time. 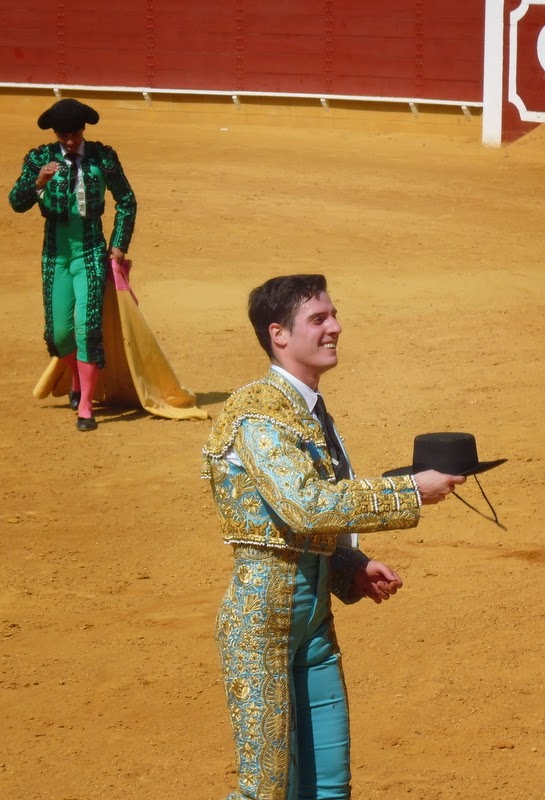 Having arrived late - the novillada started at 11.30am - I only saw five on the day. Three earned themselves two ears apiece from an indulgent crowd and the other two had some problems - one, who tried his hand as a picador as well as a toreador (the word doesn't exist), was tossed by the bull on both exercises. Indeed, poor chap spent more time lying on the sand with his arms over his head that standing upon it. Nevertheless, a couple of the bullfighters showed great promise. It's good to know that la corrida has a future in the hands of these confident and brave young men. 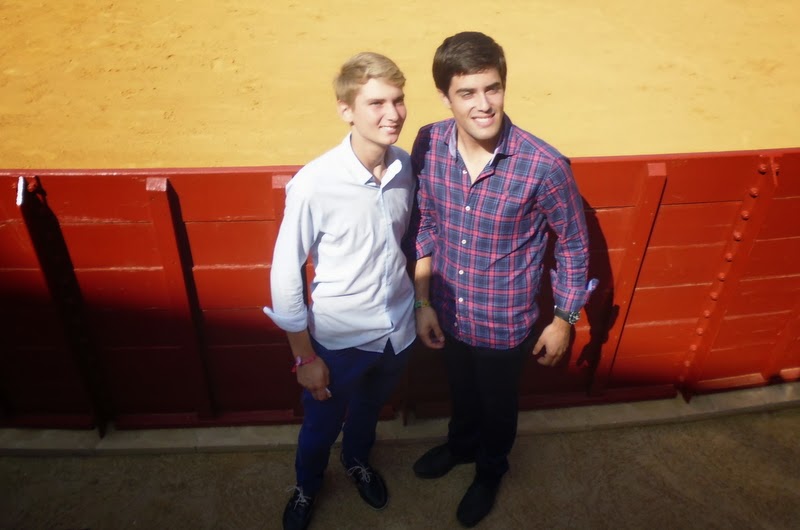 There is a growing group of people who consider bullfighting to be an anachronism and evil. They are known as anti-taurinos. They wouldn't have enjoyed the spectacle in Roquetas over the weekend, but at least they stayed away from the gates this time.
Posted by Lenox at 9:31 AM 1 comment: