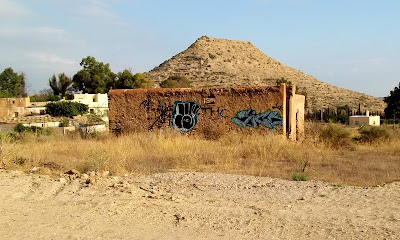 Ah - the beauty of Mojácar - sadly beaten down over the years by the speculators and the ignorant, but still a place to enjoy. Here is the magnificent 'Mojácar la Vieja' mountain with an old cortijo in front. A simply stunning... no, wait, hold on... some fucking idiot has gone and painted some crap all over the ruin.
Posted by Lenox at 10:01 AM No comments: 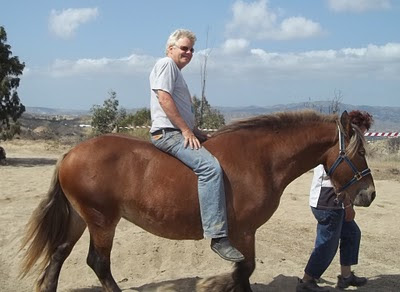 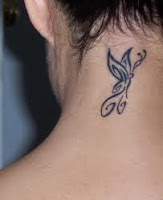 It all started, innocently enough, with imitators of servicemen wearing a tattoo on their arm, while some young tourists, inspired by seeing Indian women wearing a small stud in their noses, deciding to do the same. Tattoos and piercing slowly became a queasy but moderately fashionable idea, with young men sporting a modest earring or two and – generally speaking – society’s less-attractive girls found themselves considering a small tattoo on an intimate part of their body, or a ring through their nose or, worse still, their lip. At least the ring could be removed later, probably without leaving a mark.
The first non-regulation tattoo, you might say, that I ever heard of was worn by Erna, an old Danish woman who had been in the French Resistance. She was connected to a group called Les Papillons, and she had a tattoo of that brave collective, put on I hope after the war, high on an inside leg.
Around the same time as Erna, who had merely intended to drive to Lyon but, according to her, had missed the turn-off and not possessing a reverse gear in her ancient Renault, arrived in a cloud of steam in Mojácar, another old-timer called Benjamin Rappaport bought a house here. He too had a wartime memento, this one a number tattooed on his arm in some camp by the Nazis. Later, Sammy, an American pansy, arrived in Mojácar and opened a bar. He had a few blued and faded scrawls on his arms, and in his ear, an ear-ring.
For a while, Mojácar slept in peace. There was a girl with a stud in her nose called ‘Golden Snot’ who caused a small sensation in the eighties, but, in women, piercings and ‘tramp stamps’ were rare and generally un-admired.
But here we come to it: small tattoos and moderate piercing came to the attention of trend-setters, who these days are usually either film stars or football personalities, neither group known for either their intelligence or their humility. Small and coy became large and obvious; self-mutilation became suddenly fashionable.
Tattoos feed on being evident. Their owners choose their site for their visibility, and like to wear a reduced amount of clothing to show off their vanities. Some of these will be tattoos on their neck or forehead, or heavy ear-stretchers, rendering them entirely unemployable. Others, if one is to believe the hype, will have clitoral or penile piercings leaving their friends with the uncomfortable recollection of the story of the two young lovers with dental braces who, in a simpler age, got locked together while kissing.
Some people chose messages in Arabic or Chinese to tattoo across their chest or emblazon on their neck, which may or may not say ‘peace’ in those languages. In fact, they generally say ‘cretin’. Others list their children’s names – or the names of their lovers.
A girl I know has a number of different tattoos, pictures, designs and words inked into her epidermis by a high-speed needle. They hurt, but, she says, there’s a kind of ‘high’ in getting them done. ‘You want more’, she admits.
And in every town, there’s some guy with his equipment, ready to mark you up – for better or for worse – for ever. And with him, his assistant who will pierce your tongue, neck, nose, septum, lip, breast or privates. You may get an infection, but it’ll be worth it. Brad and Angelina both have them.
So, I feel sad for the girls, who have been peer-pressured into having a small ‘thing’ tattooed on their left shoulder, denying them a chance to wear a pretty dress.
For life.
Posted by Lenox at 9:36 PM No comments: 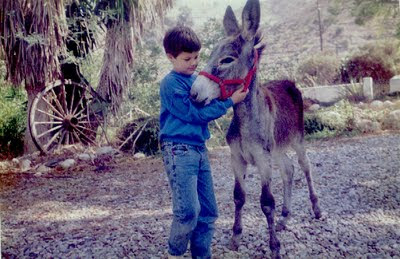 Going through all the boxes of photographs, we found this one of our son, Daniel, when he was little, posing with a donkey apparently called Bella. For some reason, there was always a number of animals in or around our house (we even have a lavatory still known as 'The Pig's Bathroom'): dogs, cats, tortoises, donkeys, wild boar, chameleons, horses, mules, ducks, chickens, peacocks, pigs, guinea pigs and rabbits. What with attrition, disease and the passing of the years, most of them have now moved on to their Reward.
And there comes a small fear of mine. When I, too, pass off this mortal coil to a Better Place, I can't help but imagine a misty empty field somewhere, a tree or two, perhaps the spirits of a few loved ones close to me... and then, with a drumming of mighty hooves, a hundred, a thousand critters will breast the far-off hill and run towards me, hooting, honking, barking and screeching, mostly (I hope) with a fond look in their eye as I try, against all odds, to remember their names.
Posted by Lenox at 7:37 PM No comments: 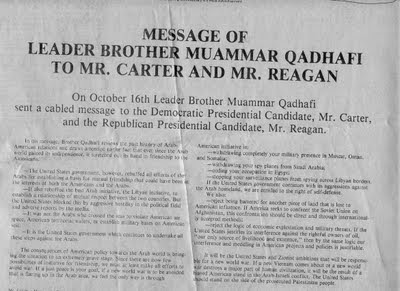 From the Washington Post; a full-page advert from Wednesday, October 22, 1980. For some reason, I have this stashed away. Not much to do with Spain (despite his properties in Benhavís, Marbella), but maybe of historical interest. Consider: Carter and Reagan and their times have long passed, but a dictator like Gaddafi managed to last rather a longer time (he seized power in 1969). Camping in a truly provocative way with his tent in the Downing Street and Rose gardens... and the Western rulers kissed his hand.
It's worth reading - Gaddafi makes some good points. I'm not an apologist, but doesn't his country have rather a lot of oil?
Posted by Lenox at 8:43 PM No comments: