Did Spain Get a Bit Tamer Over the Years, Or Is It Me?

The subject of old Renault 4s came up somewhere. My dad had bought one back in 1967 which stood us proud until one day some nitwit from Melilla creamed us on the way to the liquor store in Vera. I was in the front with my dad and suddenly, so was the dog and several empty crates of beer.

It was a wonder that nothing was spilled.

The Renault had a push-pull gear lever, as did its rival the 2CV. If you are not familiar with this, then know that there's a stalk sticking up out of the motor, the gear lever, and then there's an umbrella handle poking through the dashboard somewhere with a little ring on the other end which is loosely held over the gear-stalk. All you had to do was waggle it in the right way, a bit like those cranes that win a prize in the back of most bars. There was a trick to it. Reverse was way over to the right.

Or was it the left?

After that experience, my dad stuck to Citroëns.

And beer from the supermarket in cans.

Life in Spain was fun. Franco had closed the gates to Gibraltar but otherwise left us in peace. Indeed, a trip down to the Rock to change money - it had the nearest Barclays Bank - involved a detour via Tangier, which was always a blast. Morocco meant - and still does - trips to the souk and a growing collection of carpets, trays, jalabahs and Goulimine beads. Gibraltar was English beer, sausage rolls and people with funny accents; but hey, you can find those anywhere these days, Brexit notwithstanding.

My father and I spent a few days in clink in Vera once. We had been cleaning up the local view-points (by sawing down a select choice of billboards) and were thrown into the calabozo below the Vera town hall for our troubles. Greenpeace would have been proud of us. To our surprise, we were arrested several months after we had hung up our saws by a contrite pair of Guardias (my dad used to send a crate of wine over to the cuartel every Christmas with his compliments), but justice in Spain is rarely swift. We spent five days in the pokey before being released on bail. I announced that I was leaving school (I was attending one in Seville) as the consequent result of having become an old lag at 17. And thus I grew up. Franco returns to the story here, as he celebrated around about then his thirty five years of terror with an amnesty for small-time evil-doers like ourselves.

Thus nothing more was said.

I went off after that and conquered society; well, the warm bits anyway. As an adult, I have spent most of my time in Spain (with periods living in the USA, Mexico, Paris, Florence and so on). In all, I have spent maybe three months in the UK since 1970 - probably more than enough.

Spain had filled up over the decades with us Brits - or rather, a reduced number of coastal villages did. There aren't many of us to be found inland, or in the cities. Locating an English breakfast or a Union Jack pub is hard to do where I live - a suburb of the provincial capital with an abandoned beach where there are no hotels, souvenir shops, Indian restaurants or even tourists. We have no currency exchange places or charity shops or even, for that matter, earnest dog and cat people. Each morning I manage perfectly well with a slice of tortilla and the local newspaper.

I can't complain. I spent plenty of my time as a young whippersnapper in the discos and knock-shops with the best of them. 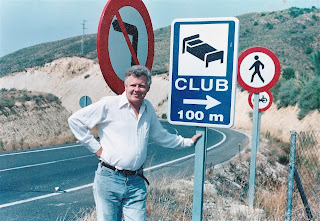 I smoked pot and still can't remember what I did when I was 27. I drove cars way to fast (I'm not counting my dad's Citroëns here) and was lucky in love. I travelled the world, or enough bits of it to catch a balanced viewpoint. I opened an expat newspaper here in Spain and ran it for fourteen years, which meant the end of my money.  I was married to a wonderful lady (she took this picture), who died in 2014; and above all, I read books.

When we moved to Spain in 1966 - my parents, me and two whippets - we brought with us a half ton of books. These were not classics, or textbooks or anything of much value, but if there's one tradition that the Spanish will grimly stick with, it's broadcasting truly awful television. So I endlessly read novels. Indeed, as the years catch up, it's the one thing I can still do. And at the risk of contradicting myself - what a pity there's not a good charity shop handy! The nearest one - six books for a euro - is an hour down the road from me.

One Day, Somebody will Publish These Essays as a Book 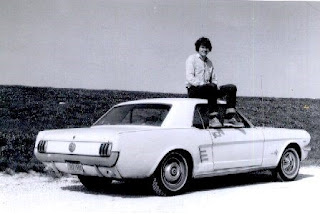 I've been fixing some of my favourite stories and have posted them here. One day, maybe somebody will publish these things as a book. Judging by those volumes that friends have completed along the way, sales won't be brisk. One book co-authored by my late wife Barbara, along with a riding instructress and a physiotherapist, had such a small run, maybe ten copies, that one day a great-grandchild of mine will become wealthy from selling the last existing copy at Bonhams.

Selling books is about marketing. The publisher wants the author to agree to a minimum of three books, and also to give a talk or two, and a few book-signings.

But who cares. I write these things because they are fun, and maybe readers can learn a bit about Spain as they thunder through the collected works of L Napier, your servant.

The Morning Bracer Sets One up For the Day

I won't say that I started the year with a glass of tequila, mainly because I was in bed by half-past nine. Age takes its toll. Breakfast will come around in due course, and maybe I'll have a rare Bloody Mary to set me up instead of my usual glass of warm goat's milk.

The more seasoned workers out here in the Spanish shires like to start their day with a bracer, to help them get going until the whistle goes for their merienda, sometime around eleven. Now a morning nip in Spain could mean a brandy or an anís (or indeed a fiery mixture of the two called a sol y sombra) but taking that as a regular morning wake-up will eventually rot your liver with the consequence that your retirement years chewing a pizzle-stick while looking tolerably wise will be all the shorter.

The answer (if you are a drinker, that is) would be to  pour some hot black coffee over the hootch - hey presto: ¡un carajillo! Whether it's un brandy (we aren't allowed to say 'coñac' any more) or something from the cut-glass aniseed bottle with a picture of a monkey on it.

Of course, the unconventional will order something less known, maybe a ponche (a late friend of mine thought it was the the fountain of youth and would switch to it, he said, when the brandy was paining him). Ponche, it comes in a silvered bottle, is pretty good stuff. It's a sort of sweet-orange syrupy little number.

Huh, I just got corrected by Google (or, in this case, Gargle) who says  'The genuine Spanish ponche is made with five top-quality natural products that come from different parts of the planet: the skin of the best Andalusian oranges, cinnamon collected in Sri Lanka, vanilla from Mexico, cloves from Madagascar and nutmeg from the Moluccas Islands'. Geez, it certainly makes Sloe Gin look a bit foolish. 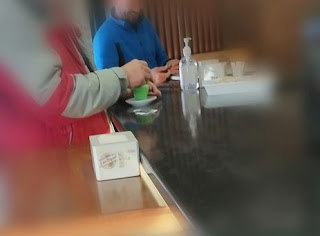 Yesterday, I was in the local bar having my morning half a toasted pan de hoy soaked with tomato and olive oil ('un medio con tomate') and a coffee, when the fellow next to me surprised me with his order. It was a glass half-filled with crema de menta, topped up with warm milk and a spoonful of sugar. After he had tottered out back into the inclemence of the January sunshine, I asked the old girl behind the bar whether she sold many of those. She said, that no, but that he was a retired Guardia Civil, and he evidently liked the colour.

There's a popular kiosk in downtown Almería, near where I live, which serves a breakfast drink called un americano. This rare beverage is a leche manchada - a milky-white coffee - with a shot of dyed Licor de Kola (a strange Valencian alcohol based on the African kola-nut which is said to be brewed by the true inventors of Coca Cola). Served with a twist of lemon, some vegetable dye and a sprinkle of cinnamon. The bad news is that the kiosk has been bought by a teetotal Saudi who is planning on trimming the morning menu, leaving any ambitious Almerían cafetero with an interesting opportunity.

For those who won't go with coffee, but want to keep their drinking civilized, one could not do better than to emulate my friend Manolo, who always takes un tewe - a tea with whisky.  If he were Scottish, I suppose he'd be pouring it into his porridge. Hell, I personally don't say no to a tot of Cap'n Jack poured on my ice-cream.

And so, we return by a roundabout route to the Bloody Mary. The secret of which, and don't tell anyone I told you, is a surreptitious squirt of dry sherry into the shaker.

Thus the day takes of a joyous and propitious view, whether it's to work, relax, write, or recall criminals apprehended or otherwise. A simple libation before the serious business of surviving until the cocktail hour.