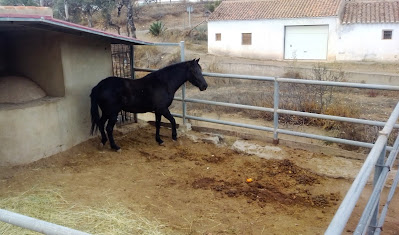 We have a friend called El Lobo, who sometimes sends us tips which turn out to be something entirely different from what we expected. Our visit to the hard-to-find settlement of Las Matanzas earlier this year being one such.

On Sunday, following The Wolf's recommendation, we set off in the car to have a look at a horse and some feed. This meant taking the road towards the interior of the province, somewhere up beyond Sorbas and the wonderfully-named Uleila del Campo.

The road went from motorway to fast straight two-lane to wiggly one-lane to something that I hadn't seen for about forty years - a thin asphalt wash on what once must have been a track. The village of El Pilar was so small, it apparently only had two British families living there (one of whom runs a restaurant, El Albar, which I must properly visit one day).

But we had come to see a man about a horse. The horse in question is a mare of six years and she has never been ridden. The deal would include a shed-full of avenate (oat-hay). I guess you wouldn't need the one without the other.

The mare is called Zaha. I have no idea how you pronounce that. We examined her teeth and gave her a hug - she seemed very tranquil - and wondered how to get the bales out of the shed and down a very narrow path. We'll give you a call, we said.

The  owner of the steed explained the way towards the coast - avoiding Sorbas and taking the road - some road! - to Cariatiz. This is a village where we had been once before - a pair of American artists had spent a season there and invited us to their exhibition. She painted on canvas and he painted on rocks, which he then turned into a maze through the nearby dry riverbed. All very vanguardista. There was a village fiesta the day we were there, and a tiny but proficient band played acoustic as we hopped about with a glass of local wine.

From there, after the usual three turns around the village looking for the exit (why would you want to leave?), we headed out on a road signed for Sorbas, but then found the turning for the motorway, civilization, and an expensive lunch in Turre (next door but one to a restaurant where an Englishman was singing Frank Sinatra to playback).

Expensive? Well, it cost almost as much as the horse.

Christmas Comes, But is it Safe?

There’s no doubt but that these rules for our well-being and protection are a bit arbitrary. They are created on the run by people who have no experience in this kind of pandemic, because no one does.

They can only do their best, no doubt worried about whether they’ve been too tough against the economy, or not tough enough in saving and protecting the public health.

We see enough Facebook articles, quoting some fatuous tripe found on YouTube or Twitter along the lines that we are being made fools of (for some reason which is either never explained, or if it is, is too stupid to waste time on. Bill Gates wants to put a microchip in our vaccine to control us like, what, robots?).

A Facebook meme tells us that we are being played, and it’s only one chance in a million we’ll get sick and die from Covid-19 (a cunning plot by the Marxist Democrats etc). Don’t wear a face-mask, they say. By the same logic, don’t wear a seat-belt either, or stop at a red light.

What could go wrong?

Many of us push against these rules, testing them to see how far they can be bent. The local supermarket doesn’t sell tinned jellied eel – can I go to the next town-but-one to buy some? Can I take my dog out for a walk after curfew? Why just six people for our birthday lunch, and not eight? 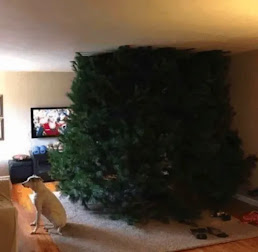 Christmas is all but upon us. The tension mounts between safety and celebration. For those of us with family back in our home country, this awful, little-understood situation has become a minor tragedy. Can’t they let us join together on this most important day?

The answer is that these rules are there to hold us in check, to keep us aware and, of course, to try and keep us safe.  Another Facebook meme says ‘We isolate now, so when we gather again, no one is missing’.