The Bank Got me Drunk 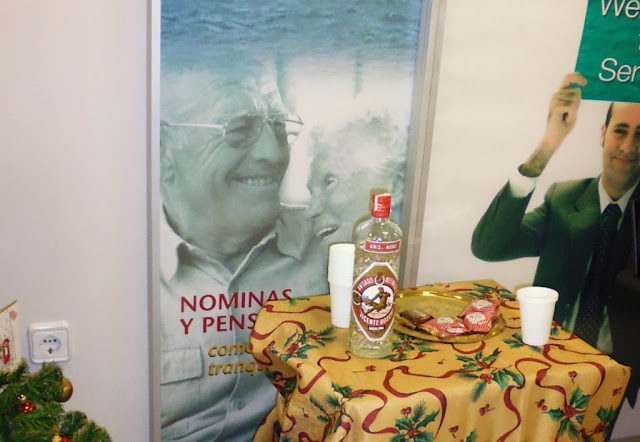 Here's a disappearing custom - the complementary glass of hootch at the bank while you wait to see if you can afford that silver trinket for your wife. The petrol station also used to offer a glass of Christmas cheer, but I haven't seen this particular custom for a few years now. I blame society! In modern times rather, we are regaled with endless stories of the revolting Catalonian caganers, little Nativity figurines - usually politicians - taking a dump. Very charming. Personally, I'll stick to the Anis del Mono.
Posted by Lenox at 12:03 PM No comments:

Where are the Ecologists?

The plastic farms of Almería, the invernaderos, occupy around 260 square kilometres of land: almost exactly 100 square miles. They are sometimes cited as the only man-made thing you can see from space, depending on which part of space you happen to be occupying...
However, it's still a lot of land under plastic, about twice the size of the city of Seville. Odd, then, that the ecologists who influence the Seville government don't seem to be fazed by this attack on the environment.
There is no doubt but that the ecologists, treated with the same power and fear as was once accorded to the Holy Inquisition, have had a massive effect on the wealth of Andalucía, by ruining the business of residential tourism, and the chance for small villages to grow (through the POTA, a peculiar law which allows villages to expand by a maximum of only 30% of their number of inhabited homes every eight years). Indeed, the area of the Almanzora Valley, where many of those houses planned, built, promoted, sold (to Northern Europeans) ...and only then declared illegal, has a population of 40 per square kilometre, versus the entire province of Almería at 72 and the Comarca del Poniente (where most of the plastic farms are) at a respectable 230 people/sq km.
Villages that aren't growing will lose their young. They will move to the cities where there is work, opportunity and diversion. The elderly sometimes retire back to su pueblo and may generate some modest work on the old casa. But the chance of those small villages having much of a future is small. Indeed, of the thirteen municipalities in Andalucía with less than 200 souls, nine of them are in Almería.
Here's a quote from an 'Amusing Planet' piece on the invernaderos of Almería from August of this year: '...A few small towns in the area have been completely swamped by the white plastic farms. Plastic manufactures and recycling companies have also set-up in the region, where discarded plastic sheeting and rubbish lies wherever blocking up riverbeds. Last month the death of a sperm whale that washed up on Spain’s south coast was linked to the Almeria greenhouses after it was found to have swallowed 37 pounds (17kg) of plastic waste dumped into the sea. Empty pesticide containers bearing toxic warnings lie among the plastic litter. On the coast at El Pozuelo plastic waste is piled calf-high'...
A mess. So where are the ecologists?
They are too busy with the 'illegal houses' sold to the northern Europeans between 2005 and 2008 when Len and Helen Prior's house was suddenly bulldozed down on their dime. The Priors have been living in the garage of their home (which escaped the demolition) since January 8th 2008. Six years ago. The area, incidentally, where the Junta de Andalucía - with the connivance of the same ecologists - wants to build a macro-city of 70,000 people to be called El Llano Central (a flood plain, by the way).
The best major article on the greenhouses I've seen comes from The Global Mail, an Australian newspaper. Written by Eric Ellis, it's called 'The Stain on Spain'.  '...Morrocan Mohammed El Hosni paid a human trafficker 3,000 euros to get across the Straits of Gibraltar to Almeria three years ago. Today, the 33-year-old tends zucchinis for 30 euros a day, going home to his family of five who live in a chabola outside La Mojonera.
These crude chabolas are the hovels that punctuate the hothouse region here, and embarrass Spain. Fashioned from scavenged cardboard boxes and discarded plastic, they are erected by homeless Africans on abandoned plots or on land not yet turned into greenhouses. Water is brought in by bucket from nearby wells and stored in discarded pesticide containers. Cooking and heating is by bottled gas, the electricity lifted off the main grid by running illegal, fizzing wires'...
Periodically, the Spanish authorities bulldoze down some of these chabolas. Indeed, the 'Defensor del Pueblo', the Andalucian ombudsman, is currently investigating a mass demolition of chabolas in El Ejido from September last year.
Again, where are the ecologists? Are they with the Caritas charity, which claims that there are about 10,000 people living in Almería without shelter, including around 7,000 on the farms. Those who live this kind of life won't last long, a study shows their life expectancy to be 20 years less than the rest of us, thanks to their lack of access to the Health System and to proper shelter, and they will be doubly frustrated to know that there are some 25,000 vacant bank-owned homes in the province. More at El Ideal. 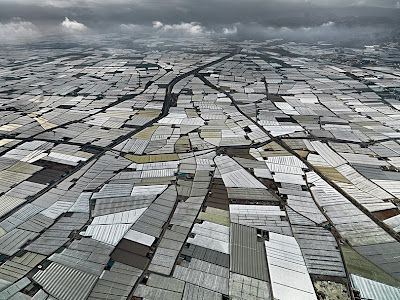 ...And those bank-owned properties. 2.5 million of them stretched across Spain. Not one of them illegal? How pragmatic of the ecologists!
We hear of the old Cortijo del Fraile in Nijar, where Lorca set his play. It's falling down now. So too is the Palacio del Almanzora in the village of the same name. So too (not!) is the enormous Hotel Algarrobico on the coast along from Carboneras. What are the ecologists up to?
I imagine them as city folk. Young, serious and bespectacled. They know nothing of economics, and care nothing for the livelihood of the villagers. They love projects, such as the absurd 4 million euro tortoise sanctuary built outside Bédar, but they know nothing of the countryside. For them, it's precious walks along old paths used by shepherds in centuries gone by, but now those sheep must wear microchips. The shepherd will be a Moroccan being paid in the black.
Almería could have been the Florida of Europe, but instead it has chosen to become the Georgia of the antebellum. I blame the ecologists.