The British Expats: The Challenge of Brexit


It’s hard to know how many Britons live in Europe. We may be as many as 2.2 million, or as few as a mere 1.6m. Nobody seems to know, and frankly, neither figure seems important to those who ‘stayed home’. All those Britons living in Europe, forgotten except when it’s time to plan the summer hols. Otherwise, except for birthdays and Christmas, you don’t seem to like us much and, if you’ll forgive me from making the obvious point, neither do we have much time for you lot. Normally, we wouldn’t even be having this conversation, if it wasn’t for the Referendum, coming up in late June. 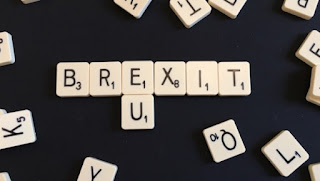 The British people, plus for some reason the Gibraltarians, are allowed to vote on this, but many of the passport-carrying Brits in Europe are not, thanks to a thing called ‘the fifteen-year rule’. This despite what a ‘Brexit’ (horrible word) would do to us. We would no longer be fellow ‘European Citizens’ in our chosen countries of residence, if such a thing were to come to pass, just some more foreigners.
It’s odd how nobody knows how many we are, living as we do in Europe. To take an even larger view, it’s suggested that there are as many as twenty million Europeans living in another EU state than the one written on their passport. But no one knows or cares in this admittedly anal Super-state we inhabit, where every sheep and goat is chipped. This is because we don’t have any political representation in Brussels: there’s no spokesperson for our group, nor even a champion – for a collective which is four times the size of the population of the Republic of Ireland.
We wonder what might become of us. Those of us who work in the EU might need to get work-permits. In Spain, where I live, the unemployment is famously high. Would the Spanish authorities hand out those sought after work-permits as if they were sweets? Probably not.
How about visas, a stamp in one’s passport every six months? For me, this would mean a trip to Gibraltar (have you seen the queues?) and, if Spain with the enthusiastic help of the (by then) ‘other Twenty Five’ decided to annexe the Rock, then we would be talking a regular visit to Tangiers.
We would probably need new Residence Cards, which would mean having a decent income from abroad (from the UK normally, we don’t all have accounts in Panama) and an enforced trip to the Spanish embassy in London.
Our European Health Cards would be valueless. Currently, the Spanish health service bills the British NHS (and vice versa) monthly for all and any medical issues and procedures. This would stop.
Those of us with British pensions would find that these would no longer be adjusted for the increase in the cost of living (as happens already to those who live outside the European Union).
We would lose our right to vote (and be voted for) in local elections here in the EU in our town of residence. So bang goes my plan to become the local mayor. We wouldn’t be able to vote in the European elections either - not that it ever meant anything, since the candidates are all nationals, and have as little interest in the émigrés that live among them as the British appear to do . It’s a small point – most of us don’t bother to vote for the MEPs, since they – and the system – do nothing for us. But for once, we would like the politicians – any bloody politicians – to listen to us. We are Europeans. We also fought and contributed towards the civilization of Western Europe.
I suppose we could take out local nationality. That would make for some good reading in The Times: ‘The British Population Fell by Two Million Last Year’ (luckily, they all lived abroad).
The fiercest worry comes from what London would do following a Brexit. The key issues are plain enough to see – exports (not expats) for the ‘Stay’ group and immigration for the ‘Leavers’. Thus, if everything went to shite, the two million or so Europeans in the UK – studying, working or living, would find themselves in line for the chop. You can’t throw out your Commonwealth foreigners, your Indians, West Indians and Pakistanis, so you would be concentrating on the Poles, the Bulgarians and the Estonians (who, no doubt, all take your jobs and your women). With them would come the rest of them: the French, the Germans and the Spanish (there goes your only decent restaurants). And, if you make residence hard or impossible for them – what would Paris, Berlin and Madrid do to us? If we were all deported back to the UK, those two million of us, would you find housing, jobs and some money to keep us going, or would the remaining immigrants you hold to your British bosom be obliged to build Quonset huts for all of us rather hostile returnees over on Salisbury Plain?
Would we get the vote returned to us?
It’s odd that the British should ignore us so. They will happily fly halfway across the world to defend 2,900 Falkland Islanders, but at the same time, we expatriate Britons, who live quietly in Europe, will be discounted as traitors, drunks, un-persons and old fools who should have seen this coming. Just wait until we all come home.
Posted by Lenox at 7:48 AM 5 comments:

The AVE is an Expensive Toy 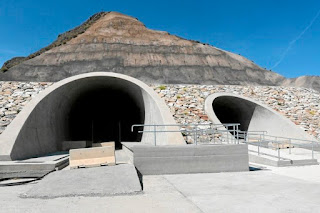 Down in Almería, an area which has never had much of a train service (just the slow daily creak to Madrid via Linares) and with its second provincial line closed down in the eighties (through Albox and Zurgena and on towards Pulpí and Lorca) through lack of public interest, it’s a wonder that the Almerians should be so keen on having a high-speed train: an AVE. Is it for the kudos, the high demand from passengers, or perhaps just another link to be completed in a secondary route across the country? The longest twin tunnel in Andalucía – currently bricked up (to keep the shepherds out) as we debate whether to reduce the eventual service from Almería to Murcia to just one line of track (and when will they build the AVE the other way – Almería to Granada?). Now in the northern part of Almería, the Government is collecting up the tortoise population (a silly distraction, say the PSOE as the ecologists nod their heads wisely, thinking of their next European subsidy) and organising the local expropriations so they can build another bit, and slowly the whole behemoth struggles forward a bit more. By the time it will be finished and ready to use (with yet more tickets subsidised by the taxpayer), for goodness’ sake, we’ll all have personal fliers anyway.
But the AVE is about Modern Spain’s place in the world: its search for international respect. TV journalist Jordi Évole asked Mariano Rajoy about this in a recent interview:
Rajoy: What country in the world has a railway infrastructure like ours? (…)
Évole: Sometimes the trains run a little empty (…).
Rajoy: Yes, yes OK. Empty maybe. But, we’ve got them!
The issues with the AVE are of course, its cost and its worth. The cost is astronomical – We read of 70,000 million euros so far (here) with another 27,000 million planned in the short term. Each kilometre of track costs an average of 11 million to build and 150,000€ per year to maintain. Of course, it’s only money wasted – and the political value is high (see here).
Does it bring extra wealth to the cities it serves? An article here says ‘no’, noting that hotel stays have actually fallen in provincial cities thanks to the service – whereas the Nation’s airport service can be seen to improve local tourist income. Two articles from a year ago – one found at El País – both manage to say the same thing: ‘A study concludes that no Spanish AVE line is profitable – demand will never be enough to cover the investment’. The ABC is not any more cheerful: ‘Spain is the country with the most kilometres of AVE per inhabitant, but also with the least passengers’.
So why do the politicians fight each other to obtain ever more kilometres of track? Because of their promises to the electorate, or their high plans for their provincial capitals, or perhaps just for the opportunities such huge sums of money might suppose?
Posted by Lenox at 5:34 PM No comments:

Not Much Change at the Boticario 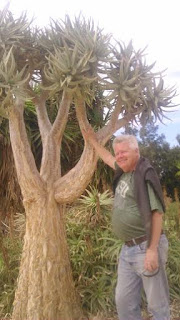 I read somewhere the other day that the Medio Ambiente people had recently done some work on the fabulous Parque El Boticario near the Almería airport.  I visit it quite often and enjoy walking around the 14 hectares of Almerian botanical life. Well, there's now one resident duck, so I could probably say 'Almerian natural life'. The duck is a newcomer, as the dried-out pond grandly labelled as 'Almerian Wetlands' by a rotting sign, has gamely filled with water and, item, one duck.
There was some small evidence of a visit from the environmentalist gardeners. I may have seen a hose. Perhaps a brief visit, as there still is much to be done. There are for example no flowers or small plants (Almeriapedia claims 75,000) and not much in the way of shrubs either (there should be 2,000). The gardens of El Boticario were presented to the public in 2005, but, since neither the town hall of Almería nor the Diputación wanted the privilege of watering and maintaining them, the parque stayed under the control of an unwilling Consejería de Medio Ambiente, based in Seville. So, the gardeners went, the silly seniors exercise machines rotted and those plants susceptible to disease or thirst duly keeled over dead.
It's a beautiful park, with few people to wander through it. It's also a perfect example of how our ecologists are interested only in funding and not, unfortunately, in la naturaleza. 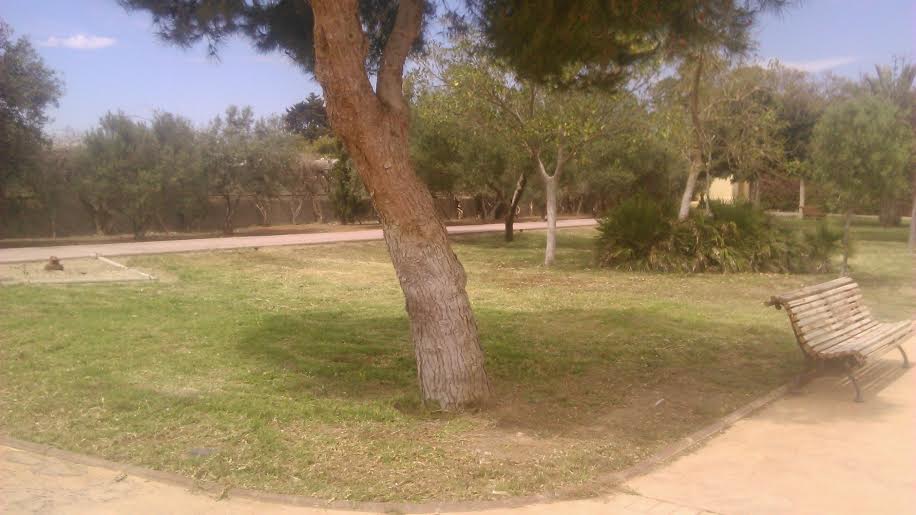 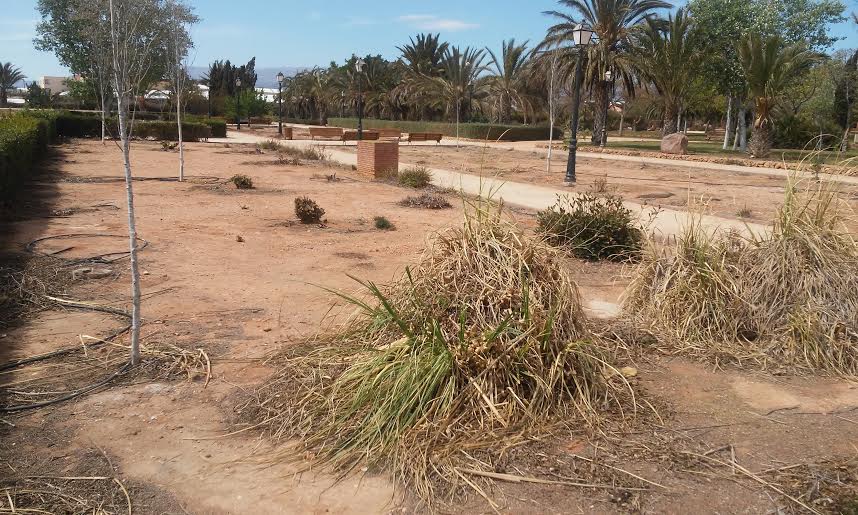