Adra (because it's there)

Over the years, I have visited many parts of Spain. I've studied in Seville, lived in Madrid, spent long hospital time with my poor wife in Pamplona and run offices in Altea, Benhavís, San Pedro and Fuengirola (the old newspaper I had called 'The Entertainer' - from 1985 to 1999). Plus an office or two in  Mojácar, where I normally live. I know the province of Almería pretty well, with time spent in the capital and trips to various towns and villages over the past fifty years.
But, I'd never been to Adra.
This hardly makes me unique. No one has ever been to Adra.
Adra, at 25,000 inhabitants, is the large fishing port that signals the end of Almería heading west into Granada and Málaga. In the old days, it was a turn-off from another switch-back curve on the ghastly road between Málaga and Almería (there were 1,060 of those horrible switch-backs, as the old N340 curved and wiggled through the sharp hills), but now the fishing town is close to the bright new motorway. There is still little inclination to visit the place, which, as I finally discovered this weekend, is a shame.
According to Wiki (we couldn't find a tourist office), Adra is the fourth oldest town in Spain, founded in 1520BC. Let see... flattened by an earthquake in 881, yadda yadda, it had the first steam engine in Spain and is a big fishing port...
Yep, the man from the Wiki hasn't visited there either.
So, in the spirit of 'because it's there'. I went with my girlfriend to give the car a good growl, see the sights, buy a 'He who is tired of Adra is tired of Life' bumper sticker, and hopefully enjoy a good fishy lunch. The road swings you in, through and out in a confusing swirl, but then, as your heart sinks and you wonder whether the next town down, Motril, might is open, the planners relent and bring you back down to the harbour. 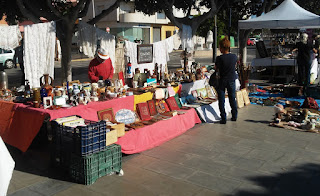 Last Sunday there was, by chance,  a flea market. We walked around, admiring a stand selling Franco memorabilia, and eventually, while looking for a bullfight poster for a friend, we bought a couple of naïf pictures from another dealer.
Adra looks like a place which is worth getting to know, or maybe a great place to hide, as nobody would ever think of looking for you there. It's probably chock-full of museums and interesting relics and buildings, plus a few wanted counterfeiters and smugglers (the murderers prefer Marbella, obviously), but we were there for a beer and a fish-head.
My companion didn't want to eat in the Club Náutico (you can never go wrong in a Club Náutico) so we walked past some dowdy looking places, including a 'American/Italian' joint, before alighting on Taberna La Granja, a splendid and atmospheric bar/restaurant in a back street. We ate a satisfyingly expensive lunch there and returned to the car.
La Granja - and you are on your own here - has a great Tarta de Whisky. The owner pours half a bottle of scotch over it to make sure that it meets with the diner's approval.
Worked for me, although I may have got a ticket driving home...
Posted by Lenox at 2:31 PM 1 comment:

In the last hundred years or so, a number of Almerian towns and villages have become independent from their larger neighbour. In all, about fifteen, including El Ejido (now with a population of 89,000), Garrucha and La Mojonera. Indeed, until 1981, El Ejido was just a district of next-door Dalías.
The latest to gain independence, only last year, was Balanegra, when it departed from Berja.
There are now 103 municipalities in the province, including the newer ones of Roquetas de Mar, Pulpí, Carboneras and Los Gallardos.
Which one will be next: Mojácar Playa perhaps?
Perhaps even more peculiar is the story of Huercal Overa, which until 1668 used to belong to Lorca, in the province of Murcia.

Almería Hoy has more here.
Posted by Lenox at 11:46 AM No comments:


Tourism is a wonderful business. Instead of a fair trade between nations, it’s just an invisible export. The punters arrive, get sunburnt, see something, acquire a tattoo... and go home again, empty-handed. Their money remains safely in the hands of the shopkeepers and the hoteliers. What a business. However, it’s a gamble that they may not be back next season. The service may not have been good, or they may have been rumbled over the diarrhoea scam, or maybe Brexit finally pulled the pound down and the cost of a week or two in Benidorm rose accordingly.
Britons may account for 20% of all foreign visitors to Spain, but close behind them are the Germans, the Dutch and the Italians. All of whom are just as likely to choose another destination next year (especially the Italians, who, unlike the rest of us, are always moaning about Spanish cooking). 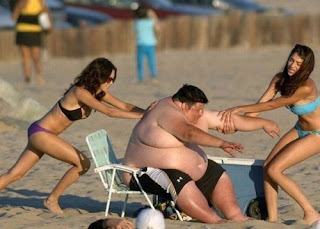 Other countries are competing for Spain’s amazing 80 million-strong tourist business, and tourists may easily chose another destination next time – after all, there’s not much loyalty among the holidaymakers. Back home with a sun-tan, it’s nice to be able to say ‘oh this year we went to Miami’. Then there’s the media: one wrong word in the Daily Express or Bild Zeitung and they’ll all be trotting down to cancel their visit to Ibiza.
Other countries have had problems – the terrorists, political upheavals or maybe a shortage of gin – but now we hear that Turkey, Egypt and Tunis are considering devaluing their currencies precisely to bleed off (sorry) some of Spain’s massive harvest.
Now is the time for travel fairs, with the London World Travel Market closing its doors this Wednesday, followed in due course by the FITUR in Madrid (January 17 – 21) and the ITB in Berlin (March 7 – 11 2018). All of these major markets are there to commercialise their own resorts and offers, with special prices, ‘all-inclusives’ and a host of other tactics. Last year, worldwide international tourist arrivals rose to 1,235 million people – now that makes one’s fingers tingle.  Our tourist councillors, plus their entourage, will be busy.
Posted by Lenox at 12:48 PM No comments:

The Balloon that Fell in the Sea

There's a fascinating Facebook page called ALMERIA & PROVINCIA VINTAGE with old black and white photographs and many a story of bygone times. Here's a recent post by Juan Marcos Puel, translated into English: 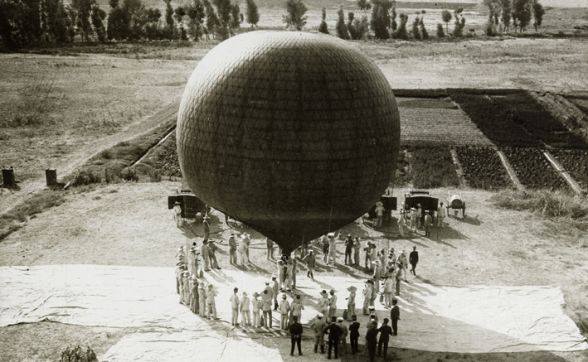 'In 1907, Alfredo Kindelán Duany, a soldier and aviator, considered the founder of the current Air Force, participated as an amateur in an aerostatic competition held in Valencia. The balloon with which he ascended - christened "Maria Teresa" - crashed due to an unexpected storm that dragged him more than 15 miles from the city towards the high seas. And as fate is capricious, after hours of drifting, refusing help and refusing to leave his balloon, when the situation was already critical, he was fortunate enough to be glimpsed in time by an English steamboat. The crewmen of the "West-Point" steamboat, which was heading for GARRUCHA, rescued him from the cold Mediterranean waters and from an almost certain death. Upon his arrival in Garrucha, he was offered lodging and a welcome worthy of a hero. The photographer Gómez Durán captured in a snapshot the welcome of the Garruchero mayor of the time, Sr. José López and the wealthy merchant Sr. Simón Fuentes who housed Kindelán'. 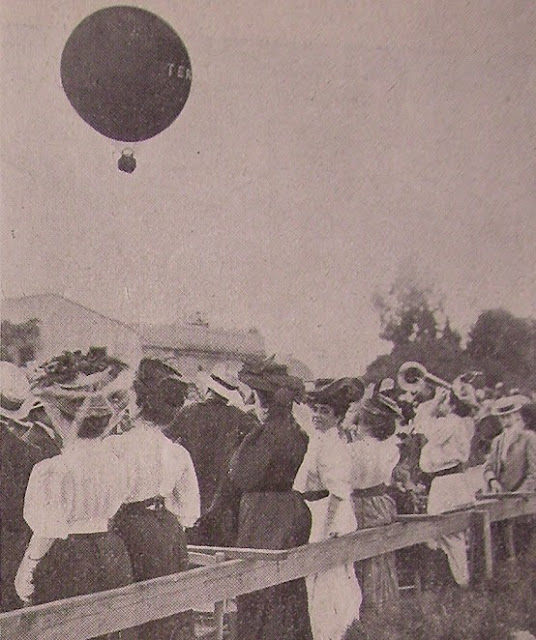 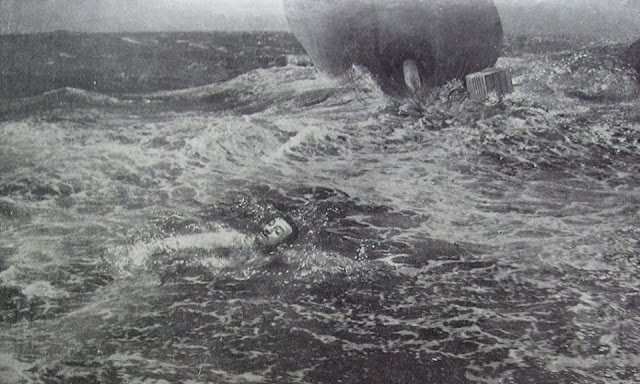 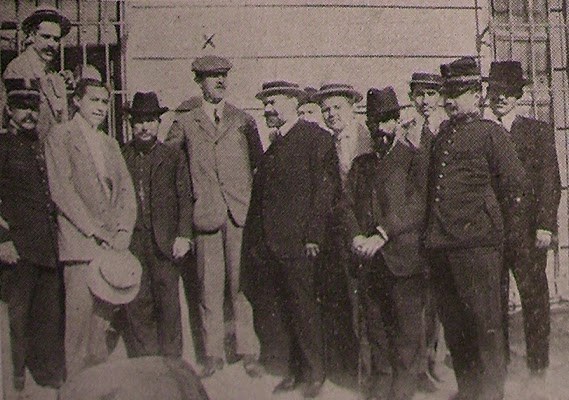