I live in a satellite town - a community on the edge of the city that doesn't have a municipality or its own town-hall, making it a suburb. At 9,000 souls, it's larger than my old stamping-ground of Mojácar - if not as famous - and it has a few things to recommend it - a playa that's maybe six kilometres long, a university, a shocking amount of graffiti and a lot of plastic farms - some of which grow marijuana and cause the occasional shoot-outs between the owners and the customers.

The town doesn't have much else of interest, besides the usual Spanish charm, and it consequently has few northern Europeans living there. A couple of Brits who work valiantly trying to teach the locals a bit of the Queen's English, maybe one or two at the university, a couple I know who are retired and live on the other side of the burgh, and then there's me over at the stables.

There is, however, an urbanisation along the coast called Costacabana, built by a German in the sixties, and it may belong to our non-municipality (nobody seems sure), and indeed there could still be a few Brits living there. This urbanisation has a beautiful beach, with eight breakwaters which have attracted lots of sand although, since Almería is different, there are no beach bars. The two joints located in the bosom of the urbanisation must have pulled strings.

None of the maps available from Google seem entirely sure where the borders of our community begin and end - but let us be inventive, and claim six kilometres of coast, and a few kilometres inland, made up of township, plastic farms and scrub. It is a bit surprising that the brief Wiki reference to our pueblo is so sure of our numbers, without appearing to have a clue about our extension, our history or our culture - beyond the singular detail of a son of the pueblo called Antonio de Torres, who is remembered as the father of the modern flamenco guitar - he's the Stradivarius of the Six String, says another Wiki post rather pretentiously. No doubt unimpressed by our sundry charms, Antonio left his home for foreign parts in 1833 at the tender age of sixteen.

The coast, which stretches north-east from the dry riverbed that makes up the boundary of Almería City, has a sea wall, a bike path, a pavement and a coastal road. On the other side of this, to the surprise of any urban planner who doesn't come from Almería, is a line of abandoned plastic greenhouses. After a couple of kilometres of this hike along the shore, we reach the University of Almería, with its teeming hordes of students - built for some reason with its back to the sea - and onwards towards Costacabana, the beach still resolutely walled, cycle-laned and little else. The abandoned plastic farms resume with a merry look of decay, until we arrive at the corner of the urbanisation (which may or may not be in our non-municipality) and our one beach-bar, located uncomfortably on some rocks. The food there is good, of course.

Our settlement is inland, up past the university and then through the narrow unplanned alleys and dead ends to the magic of the High Street. Here the traffic is entertaining, with few parking spots, how could it be else? The cars will double-park, clogging up the narrow street, but obligingly leaving their emergency blinkers on - as if to say, 'I'll be back in a mo', just off to the bank and maybe grab a quick coffee...'. The savvy ones will park in the bus stop, bringing the circulation of that regular commute to the city to a brief halt, while others will triple-park, cutting off all movement whatsoever. There is no roundabout or square to change direction, so one must either drive a couple of kilometres in the wrong direction or throw chance to the winds and try a narrow side-street. Unsurprisingly, driving instructors choose our high street for their advanced students - they say, if you can negotiate the Calle Mayor - then your licence is as good as in the bag.

I had hoped to get away with not telling you the name of our settlement, since, with the proud exception of Los Gallardos, it is the ugliest dorp in the province, but mention must be made. It's called La Cañada de San Urbano.

San Urbano, or Saint Urban, may not have been named by his doting parents after his possible proclivity for the city lights, but he wound up as an early Roman pope who tragically lost his head in some theological disagreement back in 230AD. How he came to be honoured by the people of La Cañada - a settlement which can apparently count its history to around the 1800s - is a mystery; but his saint's day, if you are visiting, is on April 2nd, where his effigy placed on a cart is towed around the streets by a team of bullocks.

There aren't many other attractions for the wealthier foreigner. We have a number of café-bars, most of which - covid permitting -  close at one o'clock. That's one in the afternoon. The few that tarry after this hour will offer beers and tapas until the wee hours of maybe 6.00pm. It's not a place for a jolly late-night out, although there's a 'Mexican' in Costacabana that stays open late. Anyhow, one can always cross the bridge heading south-west over the dry riverbed and mosquito sanctuary and find oneself rapidly enveloped in Almería City with its myriad attractions.  There are no hotels, foreign bars (although there's a Moroccan place which doesn't sell booze), souvenir shops or charity shops, however we have three supermarkets, who's walls touch one another, and a number of Chinese bazaars which are open until all hours. There are no grand old buildings, unfortunately, none of the graffiti could be described as tasteful and the church is decidedly modest. Aeroplanes - when the crisis is past - will fly low over the town as they arrive at the airport just next to Costacabana. Their passengers will either be headed to Mojácar in one direction, or Roquetas de Mar in the other. 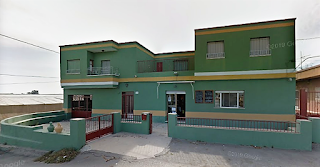 There is one country store nearby where I live, which is known as un ultramarinos - a shop that sells food, drink and imported items, including exotic spices. It is delightfully old-fashioned. You can fill your own bottle with moscatel or a dry white wine, and try the cakes and sausages brought in from Serón, Berja and other places. You buy them by weight.  It's at the Cruz de Martos if anyone asks. The estanco next door serves beer and coffee.

I live on a horse farm, with my Spanish wife who teaches riding. We have thirty horses and, by the time the day is over, we're too bushed to go out for a smart dinner in the nearby city.

A few years ago, the Almería ecologistas managed to push through the Junta de Andalucía a rule saying that we couldn’t keep the tortuga mora in our gardens.

This rare Spanish tortoise needed some good old TLC from the tree-huggers.

Specimens would be handed in to Seprona (the Guardia Civil animal protection unit) and re-housed in safety.

The two places built for the purpose were one in Bédar at 600,000€ which was never used (except for occasional BBQs and botellones) and another, above the snow-line, in Velez Blanco.

Fines were considerable if you were caught with one of these tortoises (Mojácar has lots of them in the campo). 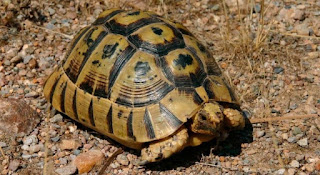 At the time, I wrote ‘if you find a tortoise in your garden, either give it to the cops, or quietly brain it, or throw it over the garden wall into your neighbour’s property. Let them take care of it’. Happy times.

Now we read , to no one’s surprise except the politicians, ‘The Ministry of Agriculture, Livestock, Fisheries and Sustainable Development (CAGPyDS) has responded, a year late, to the request from Ecologists in Action regarding the fate of the tortugas moras collected at the Centre for the Recovery of Threatened Species in Vélez Blanco-Almería.

The answer is devastating: thousands have died in this centre, where it is assumed they were recovering for their reintroduction into the natural environment…’.