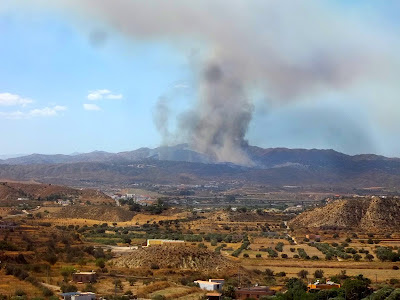 A brush fire broke out near Bédar on Saturday around midday, threatening the village and burning at least 400 hectares of mountain growth. The fire reached the edge of the village, which nestles in the sierras above Turre and Mojácar, and then headed westwards towards some smaller settlements. The town was evacuated on Saturday night by police order, and many people were obliged to sleep in the sports pavilion in next door Los Gallardos. The fire, one of three that appeared around the same time (two smaller fires in nearby Vera and Antas) appears to have been intentional. No word of damaged property as yet, but the fire, by noon on Sunday, was still active in the higher hills.
Posted by Lenox at 5:10 AM No comments:

Vera Yes or Vera No? 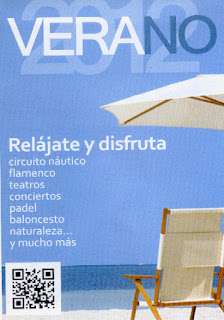 A masterful piece of promotion from the Vera 'Oficina de Gestión Turística' to promote their fair city and supported (which must mean 'approved') by the Consejalías de Turismo, Deportes, Juventud and Cultura. The leaflet has maps, information, pictures and small children jumping up and down. But we are confused by the title page.
Does it say 'Verano' (summer) or 'Vera no'?

By Amber Napier
Posted by Lenox at 10:51 AM No comments:

The Square with a Round Hole

I went to the presentation of the new square in Mojácar village next to the church, held a few days ago. The square is the final version of two previous plazas - the Arbellón and Frontón - which, after last year's demolition and this year's digging, might now profitably be called 'Plaza Rosmari's Baby' or perhaps, in honour of the fabled mojaquera who lost her arch a few mayors back, the 'Plaza de Luciana'.
The presentation was offered by the mayoress, with her crew of councillors standing in an orderly line behind her, to a small gathering of the Faithful. Opposition councillors were not sent an invitation and neither were various local media, including the Actualidad Almanzora who note in their write-up in the latest edition that: 'Como siempre, la versión del equipo de gobiereno no es posible reflejarla porque mantiene un boicot informativo absoluto hacía este medio, que nos priva incluso de recibir las notas de prensa municipales.' They say that they have an absolute boycott against them from the Mojácar authorities. 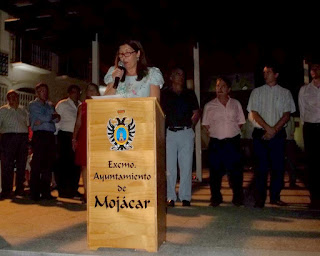 The underground car-park, to hold the famous 37 or 38 cars (depending on who's telling the story), won't be opened for, ah, business until next year. You know, paperwork... however, the large granite expanse above is now ready to admire, or put café tables on in an artful and refreshing manner. One has to think of the tourists. Nearby, a small wash breathes across a granite-chip wall, a fountain. Next to this is one of Rosmari's heavy plastic signs: 'On this date, Rosmari Cano opened the new plaza...'. There are quite a few of these scattered about the municipality, in a town where mayors are usually forgotten as quickly as is considered decent.
The mayorial presentation to the small group of supporters was accompanied by a video which showed in slow motion a film of the protests from last year. The opposition parties got their medicine in the speech as well. Afterwards, a tapa and a drink were offered to those present, numbering around eighty. As to the parking (in what we were told is now a pedestrianised village), how much would a single parking place cost, to defray the public outlay? Around 50,000 euros a pop. Are there any takers?
My first thought about this remarkable architectural onslaught arrived after I noticed the lift which towers politely over the proceedings. A splendid elevator that takes you from the plaza, whoosh, down to the underground car-park below. I imagined the maid Luciana, yearning for her Moorish prince, rather than throwing herself off the cliff to her death, could have just opened the metal door and pressed -01. Instead of the sad ending known to generations of Romantics, she would have descended safely and would now be living ever after with her prince. Who probably would have left her and opened a chiringuito instead.
But, that's foreigners for you.
Posted by Lenox at 10:20 AM No comments:

Almería's promoters are worried about the high number of homes on their books and have decided, crisis or no crisis, that it is time to get the gosh-darned Government involved in selling those homes to foreigners.
Thus, together with the national Asociación de Promotores y Constructores de España, they want the gummint to organise a 'macro road show' in foreign parts. There are, we are told by La Voz de Almería, some 25,000 viviendas for sale in this province alone.
Now, news flash for the promoters, bankers and politicians: foreigners don't buy homes or apartments in the big cities. There are no Brits living in Almería DF, Dalías or El Ejido - they would like to live in the smaller towns, villages and pedaneos in the hinterlands or on the coast. Of course, having seen the TV programs  and read the newspaper articles in the British, German and Norwegian media about how the Junta de Andalucía likes to wait until a foreigner has bought his house before declaring the structure illegal and worthless as an investment (there are over 250,000 such properties in Andalucía, mainly owned by European foreigners who stupidly thought that Spain lived by the 'rule of law'), sales are decidedly sloppy. Yes, Andalucía is an excellent place to retire to, and the move is a definite win/win for all concerned, with the new residents pumping in foreign funds twelve months a year, creating jobs, repopulating dying villages and improving their surroundings; but there is a firm and powerful rejection from the environmentalist lobby - that group of city-folk who presume to know about the countryside and are as impervious to criticism as was the Spanish inquisition in its day. 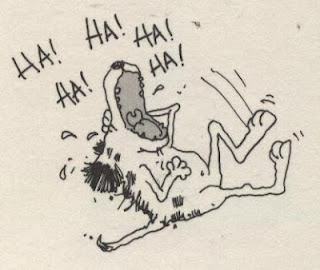 The reasons offered by La Voz for the drop in sales of these 'second homes' - and presumably echoed by the building community - include 'la crisis', tax relief and encouragements which have now been removed by the Partido Popular, the rise in IVA (well done those politicians!) and the staggering 35% unemployment in Almería - all of which are small beer compared with the summary illegalisation of most foreign-owned property across the region.
In brief, Andalucía has its post-dated 'illegal homes', Murcia its valueless bank guarantees on unfinished off-plan sites and Valencia, when the times are good, its Land Grab. Don't buy in Spain.
There are many foreigners, Europeans who should have certain rights as agreed at Maastricht, yet treated as extranjeros by the Spanish authorities (I must show you my residence card one day), who would like to live in Spain. It should be the European equivalent to Florida - wealthy and comfortable. Some foreigners, attracted by Spain's vibrant and fascinating culture, would disappear into Madrid, Granada and Seville; but we are concerned here with the majority - who want sun, peace and to drink a cool glass of wine as they sit in their garden and watch the sunset.
'We must regain our judicial reputation abroad', says José Manuel Galindo, the director of the Almerian promoters and builders association with a blindness little short of breathtaking. He's got 25,000 empty homes in Almería alone - and a hell of a lot of unpaid and anxious brick-layers, carpenters, marble-workers, electricians, plumbers, painters and gardeners to look out for. Plus any number of realtors, agents, lawyers, bankers and municipal tax collectors hoping that he can pull a rabbit out of his sombrero. But he can't, because the foreign media doesn't want its readers and viewers hightailing off to Spain, and as far as the media is loyal to its consumers (rather than its customers), it doesn't like to see people being stung.
If he could get the Junta de Andalucía's department of viviendas y obras públicas to pay compensation to Helen and Len Prior for having their house in Vera summarily demolished in January 2008 (they have lived amongst the ruins ever since), then maybe that might send a signal to the Northern Europeans.
Until then... there's always Cyprus. 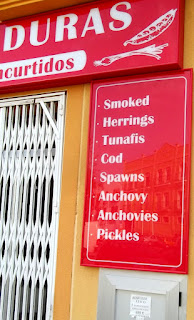 The Almería inland town of Turre has so many Britons living there that it is often known locally as 'Inglaturre'. This large number of Brits, many who don't speak Spanish, has helped to assure the ascendency across Andalucía of the traductora de Google, a handy-dandy computer program which puts anything in Spanish into a rough approximation of English, known fiercely in political circles in next door Mojácar as the 'Dump in your Soup School of Translation'.
The quandary until the traductora came along was how to get English-speaking clients without actually having to buy them a beer or (gasp!) pay them to put something of yours into their language, or at least to correct the version as supplied to you written on the back of an envelope by Cousin Bertín, who was once in Oxford for almost three weeks.
In Andalucía, Billboards, menus, signs, booklets and even the Guardia Civil's complaint forms are all full of mistakes in the English version.
A thing that we Britons laugh at (unless we're professional translators, in which case it rather pisses us off).
Posted by Lenox at 5:15 PM No comments: 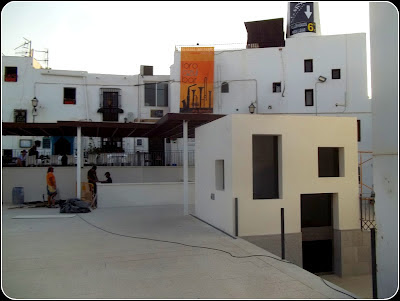 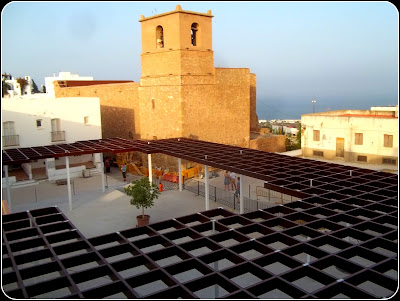 It's not quite finished, but here are the latest pictures of Rosmari's underground car-park up behind the narrow streets of the Moorish town of Mojácar. The typical flat roofs and white paint which have long distinguished Mojácar have been dropped here in front of La Sartén for a flat area to apparently become a childrens' play-park. At two million euros. So, no extra tables and chairs for the Loro Azul and La Sartén. The strange box to the right in the top picture is - of all things - a lift. This takes you down (if you are one of the 37 car-owners) to the underground park below.
The second picture, taken from the Loro Azul's upstairs terrace, shows the decorations (before the childrens' swings and the graffiti go in). Over there to the left is Liberio's carpentry shop and apartment, which he doesn't seem to want to repair. He could open a bar there...
The Plaza doesn't seem to have a name yet. Maybe the 'Plaza Voto por Correos' (Postal Vote Square) might fit nicely.
Posted by Lenox at 9:16 PM No comments: