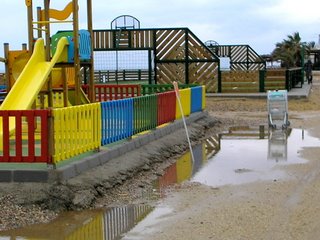 A beach isn't a playa, it would appear, unless it's covered in various attractions for those who aren't content with swimming, drinking and kicking sand into weedy looking people's faces.
Therefore, the Junta de Andalucia parcels out occasional spiffs to those lucky towns which are on the seaside to help furnish their playas with all of those good things a playa evidently needs.
In Mojácar, a recent 1,2 million euros playa-lift gave us wheelchair accesible showers, signs, flags, palm trees (very nice) and endless sports and kiddywink areas. We now have both of these last attractions spaced evenly, every two hundred metres or so, along our entire front. As you can see, they go downhill fast.
The basketball court in the back there, is finished with astroturf. Very hardy and long-lasting no doubt, but - Heavens! A ball won't bounce on astroturf!
What it will do, is bounce or fly onto the road (immediately on the right).
It seems unfair that only beaches should have these admittedly rather hideous looking attractions and neither the rest of the town, nor indeed those unfortunate towns to the inland should have them. On the other hand, they don't have beaches which need 'taming'.
Posted by Lenox at 2:14 PM 2 comments:

One of Those Days


One of those days - I was just writing those words when the power flickered and jumped, and another fifty computers from the Lower Almanzora sent out a puff of smoke and, simultaneously, in ASKII, they shouted, well, fuck it, I'm outta here. Sevillana's master-plan to persuade our local politicos to allow them to string up a fresh new high power line across our view is to have leetle cuts about once a day. Not ee-nuff power, they sob over the phone if you yell at them; but, oddly, there's enough power in the middle of the summer when fifty thousand air conditioners are being goosed.
There is the Mother of all Power Stations in Carboneras, recently voted by Greenpeace as being the forth dirtiest in Spain (twentieth in Europe) and, of course, one of the biggest. Enough power to burn the entire province off the map. We have other power units locally, including a modest solar power station (well, it's the biggest in Europe, after all, we do have a lot of sunshine) and two diesel burning power plants respectively in Palomares and Antas. Roll on, the German takeover of Endesa (Sevillana) says I.
Anyway - I was going to make a small point over the Andalucian tax authority.
They sent me a letter saying I owed them some money, which I signed receipt of in triplicate, adding my special tax number and inside leg measurement. So today, finding myself at a loose end, I went to their office in Vera (you wanna try parking in Vera), pockets just abulging and abursting with cash, to be told by an ill-dressed looking specimen in the forth office I went to that, thenkyou, no not here I had to go to Almería. A day wasted. The problem, it turned out, was my name. In keeping with most foreigners, I have a first, middle and last name. In Spain, and vive la diference says I, you have various first names ('nombres') ending usually in María - regardless of sex, followed by two surnames, a patronymic and a matronymic: your father's and mother's first surnames respectively (called 'apellidos'). My own name might be something like Lenox María Chuckleberry Smith, with the Chuckleberry being the vital name, registrywise, even if I prefered to go by the more pedantic Smith. As our colourful president, José Luís Rodríguez Zapatero does. You probably know all of this, but then, you probably don't work among those dozy people that make up the tax-collectors.
So, having looked me up under Chuckleberry in three different offices, to which I was passed with a singular lack of interest on their part and a rapidly increasing amount on my own, to say nothing of the 4.5% compound figured out by some computer deep in the bowels of the earth somewhere in out Capital City, I was eventually told that I must away to Almería if I wanted to pay, or, at any rate, to leave them in peace in their comfortable crib in Vera.
In real life, creditors are always much more taken by the idea of relieving you of a few readies. Not when the dazzling institution of la burocracia española gets involved. The fun is all in the paperwork, the needless turns around the city, the 'gone for coffee' or 'come back tomorrow' appointments.
Once, in Huercal Overa (a grungy town that doubles as our main tax office), I went to pay my five bob. You must collect a form from them, go to the bank, their bank, and pay your cash and then return to them with the receipt. This puts off quite a lot of citizens and makes the funcionarios life easier. The bank they had an account in was closed for repairs. I had to drive to Puerto Lumbreras, in the next province, to pay my shillings and obtain a ticket. Now, how much time do you have to waste?
I return back to the office, where, after a great deal of telephoning both Almería and Vera, and explaining that my name was really Chuckleberry, they graciously allowed that I could pay, both locally and tomorrow. But to hurry, before they charged me extra interest.
Posted by Lenox at 3:20 PM 1 comment:

Builders, politicians and bankers are not happy. The latest rules regarding building homes in the province of Almeria, an order known as the POTA originating in the Junta de Andalucía, make for depressing reading. The POTA is the territorial plan for infrastructure and homes in the province, a kind of super-PGOU or General Plan. In Mojacar, for example, the Seville government would allow (according to calculations from the provincial builders association) just 76 new homes per year. Other towns are equally grim: Albox 141, Bedar 10, Cuevas 144, Los Gallardos 36, Lubrin 21, Turre 36 and Zurgena 29. Currently, building runs at around four times these numbers. This new order would produce several reactions, apart from the immediate job-loss (between 15,000 and 18,000 province-wide). Prices for new homes would sky-rocket and builders would be obliged to resort to extreme tactics to get planning permissions. Town halls, which live in part due to building licences,would have to raise their tax rates spectacularly. Furthermore, due to another rule from the Junta de Andalucía, 30% of those homes built must be VPO (price controlled council houses).
Posted by Lenox at 1:56 PM 2 comments: