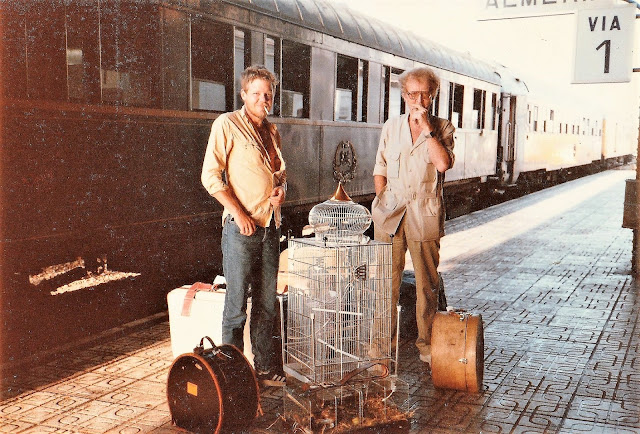 We had just returned from a trip to Paris where, although I can't remember many of the details, we had bought half a dozen chipmunks and a cage off some marketeers along the River Seine.

My step-mother will have taken the picture. You can see her two hat-boxes among the luggage. She was a professional photographer, which is probably how the picture came out so well.

In those days, the Madrid to Almería train had a sleeper, a British carriage made in 1928. Going the other way, you would bed down in the train around 11.00pm and wake up, fresh as a daisy, in down-town Madrid, the Atocha station, at 7.30am, ready for business.

This picture comes from 1984. I had been living in Paris for a few months and had an apartment there. Smoked Gauloises then.

A few years back, an American called Zach Allen contacted me and said he had once spent a summer vacation in Mojácar – where I was living – way back in 1956. He was the guest of a fellow college-student, whose father was the Spanish ambassador to Washington.

Zack sent me a couple of slides he had taken, one of the village (there wasn’t much to see) and one of the ambassador’s holiday home, el Palacio de Cháverri which was just off the beach. The first owner of the palacio was the Marquis of Cháverri, and he owned a shipping line. His captains were (apparently) instructed to fire off a cannon salute from their ships as they navigated past the estate on the way to or from the nearby port of Garrucha.

I wrote a story about the building here.

Zack had told me he had some more slides but that they were misplaced. I still hope that he finds them.

Old stories about Spain are fun to read, because we foreigners will have had little or no exposure to Spanish history and Spain, at its best, is a deeply eccentric place to know.

Historical structures are increasingly a good business too depending on circumstance, as, many venerable buildings have been knocked down, or they fell down, or they were fortuitously turned into luxurious hotels, or museums, or apartments. The Marquis’ palacio (above) is now attached, to its mortal embarrassment, to a four hundred room box-like package-tour hotel. Honk as you drive past.

Thus the old buildings that, against all the odds, have managed to have stayed erect over the centuries without too much of them falling down have the chance to be turned either into hotels (the government-run Parador chain creates very tasteful hotels out of old palaces, convents and other historic buildings) or repaired as simple money-makers (or ‘cultural tourist attractions’ to be more precise).

Unfortunately, tourists only have a finite period to go and see the historic sites, and the larger and more obvious ones will generally be higher on their list than some obscure pile of moss-covered stones which was once a fortress just a few kilometres walk upriver from a village in the hinterland.

Still and all, if you’re going anyway, it might be worth a photograph.