The Roundheads and the Cavaliers.

It's no secret that I harbour a strong dislike of the newspaper now known as The Euro Weekly (or 'The Weenie' to its detractors). The paper, which started out (both numerically and historically) as The Entertainer, took over its new name in 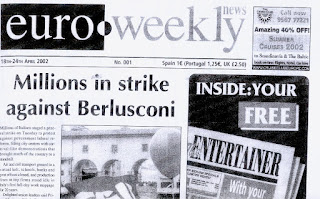 April 2002, three years after it was 'purchased' from me. To say that, from April 1999, I entered into crippling poverty, coupled with a 120,000€ mortgage on my house for old printing debts as an unexpected consequence, probably explains in some small degree my dislike of the product in question.
Here, though, I'm going to contrast The Weenie with another local English-language freebie, The Olive Press.
When I ran The Entertainer (1985 to 1999), it was meant to help both English-speaking readers (and myself, for that matter) learn more about this beautiful country we had chosen to live in.  Articles concentrated on Spain's gastronomy, its history, its culture, its attractions, its towns and cities, its people and its politics. The Olive Press, particularly in its print edition, leans towards the same philosophy.
The Weenie however, appears more concerned, after the obligatory front page piece culled perhaps from the local diario, plus a regular nod at the local dog-pound, to write about events in far-off England. The editorial this week, for example (Feb 27th), is about a row between several (unheard of) British pop stars at some event in London.
I think the reason for this is that the paper is eagerly read by British exiles, rather than expats (we won't worry ourselves here with those individuals who piously consider themselves 'immigrants', because they'll obviously only be reading El País and El Mundo). Exiles pine for their home, the fatherland, and tend to think that Leapy Lee is a superb columnist, while expats on the other hand are furiously enthusiastic for all things Spanish (bullfights excepted).
Two reader-opinions culled from recent Weenies support my contention of their readers' galloping support for the current political mess in the UK, faithfully reflected in the content. The paper, it seems to me, is ideally aimed at those who advertise full British breakfasts and who like to watch satellite TV shows (what will happen to that after the Brexit deal is sealed?). Otherwise The Weenie seems to strongly contradict its reason-to-be. Maybe I'm being harsh, but how much of the content is devoted to news from the UK; dogs, cars or beauty; or columnists who comment on the 'fings back home'?

Mojácar is becoming a rather odd place. It's turned from a sleepy village 'run by hippies' to an uneasy mixture of Disneyville and Butlins.
While the village is the Disney part, carefully scrubbed of anything authentic and re-invented with a strong-line in cheap souvenirs, the beach has been made over to sand and spade family tourism, perhaps in a nod to the powerful Catalonian-owned hotels that bookend the resort.
The latest reverse for the party-goers is the insistence on building a combination walkway and seawall, with a slightly pointless cycle-path attached (our lycra-clad bicycle guests prefer the road). To this end, a number of beach-bars (by coincidence, none of them under local management) have been or are being inconvenienced by having the pathway interrupting their simple access to the sea and, in the latest cases, having some of their space re-zoned by the town hall planners. This would mean, in the case of the Patio beach bar, losing about three quarters of its area and turning it into a kiosk. Bea, who has rented it for twenty years, has understandably pulled out. 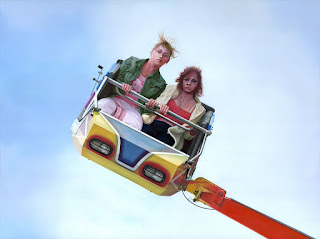 On Tuesday, the rather larger (and powerful) Maui was finally sealed by order of the Town Hall for noise contamination, and has been fined 20,000€ and a two-year closure (all arbitrary and illegal according to their lawyer). The Maui was the leading voice in the opposition to the 'Paseo Maritimo' the beach-walk so popular with the aforementioned sand and spade tourism.
In the village, the long-awaited new town hall building, with a lift and unbeatable views, located under the 'Mirador' (view-point) which appears to have melted and taken over most of the Plaza Nueva, remains unfinished after five years.
From this viewpoint, one can appreciate the so-called Valley of the Pyramids. In truth, there's only one, which is Old Mojácar, currently being dismantled by a team of architects who think that the village started there in around 900AD, which seems unlikely since Mojácar was known in the Phoenician times. The dig has 60,000€ of town hall money behind it for 2020, so no doubt they know more than I do, having merely lived at the foot of it for over fifty years.
The mayoress' autocratic views brook no dissension. She wants to control the town's future. We wish her luck from our new home, located down the road a spell...

And the Baby Makes Three

Here we are, on the step outside our little cortijo in the hills above Mojácar, Barbara and me and Baby Daniel, just three days old. The future was bright then, as it always is when you are young. Things went a little wrong later on, but that's another story. 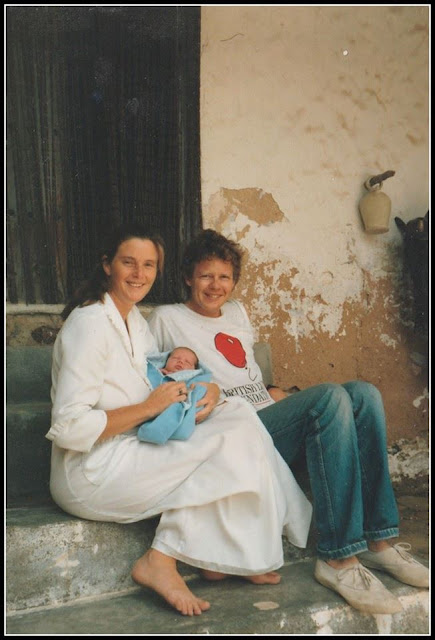