It was a day for paperwork. We may not like it much, but several million funcionarios must rely on us wandering in, from time to time, with satchels full of papers which they can then declare to be incomplete or, better still, en situación irregular. Oh, yes. Talk dirty.
So, to Almería. I had two things to do and an entire morning to do them in. The trip from our town is an hour and a bit, plus half an hour driving around Almería itself in ever decreasing circles to get to the first point of call, the immigration office, located whimsically enough in the Calle Marruecos. According to a paper with necessary instructions I had received from them, I was to give them a copy of my passport and silly green police A4 paper (issued by the very same office last year), plus photocopies of the above. It took about an hour, first queuing for a number, followed by me in conversation with a nice gentleman from Nigeria who wanted to sell me a Rottweiler, before I was finally called to the desk of a surly young man wearing a tee-shirt and ear-rings. I think he was angry that he hadn't got the day off like his companions at most of the other desks appeared to have done. We began. Turned out, I needed a photocopy of the list of instructions as well. I hadn't seen that one coming. Well, we got there finally, after he had waited for me to walk down the street in search of a shop with a photocopier and return with the vital document, adding it to my modest pile of papers.
I'll let you know, he said.
Then by taxi, because I had forgotten where the place was, assuming they hadn't moved it in the past year or two, on to Trafico.
There, I meant to put an old car in baja. This was to save me a massive 173.67 euros per annum being my town's circulation tax. Last week I had gone up to the town hall to see Nemesio about whipping the car in question off the town computer. I had the tax paper for this year, stamped as paid. No, won't work any longer: nowadays you have to go to Trafico, he'd said.
So, I'm in the taxi. Lots of people are putting their old cars en baja, said the driver. With the crisis, you have to cut any costs you can.
At the trafico building, I am allowed in to the room and, after taking the number from a machine, am invited to sit. Luckily, there was an interesting show on a screen in front of both me and a half dozen gleeful gentlemen in djellabahs featuring a properly dressed young woman driving a car, filling up with gas and checking her tire pressure, changing gears and daring my new friends to have anything to say about it.
My number came up.
Hello, I would like to put this car in baja, I said. She pushes papers across the desk: fill out this form, this other form, pay eight euros over there and then come back tomorrow. But I'm looking at the form. It wants the car's numberplate, which seems fair enough, and its date of registration, which doesn't. Hey, I said, I don't know the car's birthday, I hardly know my wife's birthday... and, anyway, what's this about coming back in tomorrow? I've just driven here from across the province.
Well, she answers, the linea to Madrid is down, so I can't do anything today.
So there we left it, with a final score of maybe one out of two. We'll see. Don Quijote would have understood.

I've Got a Fast Dog 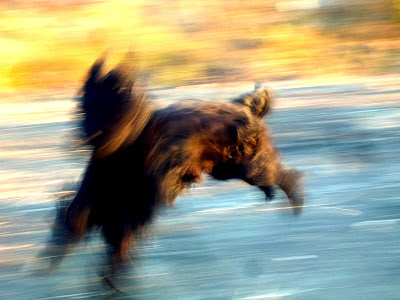 It's always difficult to get a decent photo of a Briard - this picture isn't photoshopped or, besides boosting the colour a bit, retouched in any way. Anyhow, this is what our dog looks like while enjoying his early-morning constitutional.
Posted by Lenox at 9:56 AM No comments:

A bazaar called Té con Limón in Madrid has closed after fifteen years of business, but not before posting the following text, as a large sign, outside its doors: 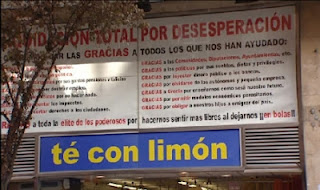 Closing Down Sale Through Desperation
We want to thank all those who have helped us arrive at this decision:
Thanks to corrupt politicians.
Thanks to Spanish bipartisanship.
Thanks to the autonomies, provincial councils, town halls, etc
Thanks to our former leaders now enjoying their fat annuities.
Thanks to the Employers Confederation for destroying jobs
Thanks to the unions for doing nothing.
Thanks for raising our taxes
Thanks for cutting our citizens' rights.
Thanks to politicians for their salaries, allowances and privileges.
Thanks for injecting public money into the banks.
Thanks for forgetting about the self-employed and small-business owners.
Thanks to Greece for showing us what's in store.
Thank you for allowing parasitic economic models.
Thanks for forcing our kids to emigrate from the country.
Thanks to all of the powerful elite to make us feel more free and for leaving us without a bean!.

Apparently, the sign proved to be something of a success and visitors to the 900m2 store 'increased by a huge amount', said the owner sadly, before he had to close the doors for ever.
Story here.
Posted by Lenox at 5:09 PM No comments:


Almería unemployment stands at 35 per cent,
lots of the lawyers and the politicians here are bent,
you can't buy a house here, neither can you rent;
...and they really couldn't tell you where the money went...
Posted by Lenox at 2:09 PM No comments: 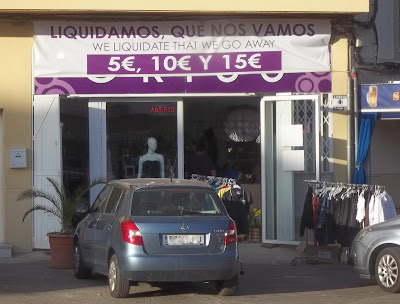 In Turre, the pueblo just inland from Mojácar, a town of about 50% British presence, signs of the crisis are apparent. It's hard to keep afloat in Inglaturre.
Posted by Lenox at 8:05 AM No comments: