Reap what You Sow

In the Levante Almeriense, tourism is much on people’s minds. On the one side, towns and villages are wondering how to increase the number of visitors to their locations, bringing in some extra dosh which will sit and stay in the shops and hostelries run, so often, by those who have a hand in the town’s fortunes and politics. Once you’ve seen the Alhambra, they say, why not come and see the ruins of a 12th century Moorish cottage, unfortunately overgrown by nettles and a sheep-dip? Money is spent and a photograph of their Worthies is taken, which then appears in the local paper. Something has been done and locally, rural tourism has gone up by 200% - from seven people last year to jolly nearly fourteen this. They could try and look for people to move to their villages, buy a house and bring in regular transfers; but the Junta de Andalucía appears to discourage this.
Some of our less attractive towns, Vera and Turre for example, have stretched local credulity by seeking a popular vote on the seven wonders of their respective communities. The only wonder is being why their bother. Other, more attractive towns like Bédar, Lubrín and Sorbas have no hotels at all and spend nothing on promotion. They make their money with the foreign residents, who spend twelve months a year in their homes, satisfied and peaceful.
In Mojácar, Sin City as it was called, when ‘sin’ meant ‘pecado’ rather than ‘without’, times have changed. Thanks to historical anomalies, the town has more beach-bars than anywhere in Spain. But a beach-bar shouldn’t be much more than a temporary bar on the beach, selling cold beers and some hot sardines cooked over a wooden fire. Salt, lemon and San Miguel. Over the years, ours have taken roots. They are finished in concrete, wood and stainless steel, and – far from being temporary structures – have, (for all I know) wine cellars below ground. They are certainly there all winter. Shut of course.
So, in Mojácar, there is the all-year resident trade, which creates jobs and keeps the shops, bars and supermarkets turning over in the winter months, and then there’s the summer onslaught. The local tourist board spends nothing on the first group, but heavily on the second. Unfortunately, the promotion is poorly handled and we are now beginning to worry (for different reasons, of course) that the wrong sort is being encouraged to visit the resort.
The Town Hall has ordered bars to close an hour earlier this year – two o’clock instead of three – so the main group of visitors, the kids, are obliged to find other fun at that hour. They go and party in their hotels or apartments they’ve rented for a song (‘550€ a week, one bed apartment, sleeps four’) causing sleepless nights for the residents. That way too, they won’t get caught drinking and driving by one of the dozens of aggressive police controls that swarm about our streets and roundabouts.
We want bucket and spade tourism say the chamber of commerce, who of course actually just want the receipts.
Following this change in attitude, the large block of 114 empty and unsold flats on Mojácar Playa that recently became a holiday centre run by the French group Pierre et Vacances has now run into some difficulty after the mayoress of Mojácar has told the company to ease off on renting their apartments to kids that just wanna have fun and to look instead for families who would be quieter and more responsible (eating in Mojácar's restaurants rather than sat on the sand drinking a kalimocho, or pissing against a wall, or being noisy late at night, or breaking plants and trees...).
The young 'uns are certainly enjoying Mojácar during these summer months. Trolley-fulls of beer and hootch are wheeled out of the supermarkets and into the apartments. So, if the Pierre people don't pull up their socks, Rosmari Cano will - in the words of the Voz de Almería - close 'em down.
The thing is - when you chose cheap and cheerful tourism, you get cheap and cheerful tourists.
Posted by Lenox at 12:26 PM No comments: 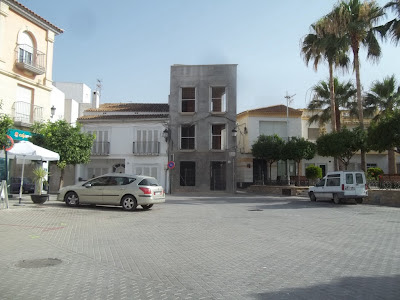 A Sunday view from Turre's Tiananmen Square, which, despite its generous size, only has legal parking spaces for about six cars and a bicycle. What is it about parking and our local planners? By the time the shop owners have arrived, there's never any room left for the punters' cars. So, not much business. This may explain why the 'Calle de las Tiendas', which disappears off to the left, is headed by that fine looking yet inexplicably unfinished building in the centre of the picture. The building, proof if needed that architects are a thing of the past, has a particularly wonky look to it because the narrow lane passing it goes off at an angle.
It will no doubt remain like this for a while to come.
Posted by Lenox at 8:29 AM No comments: 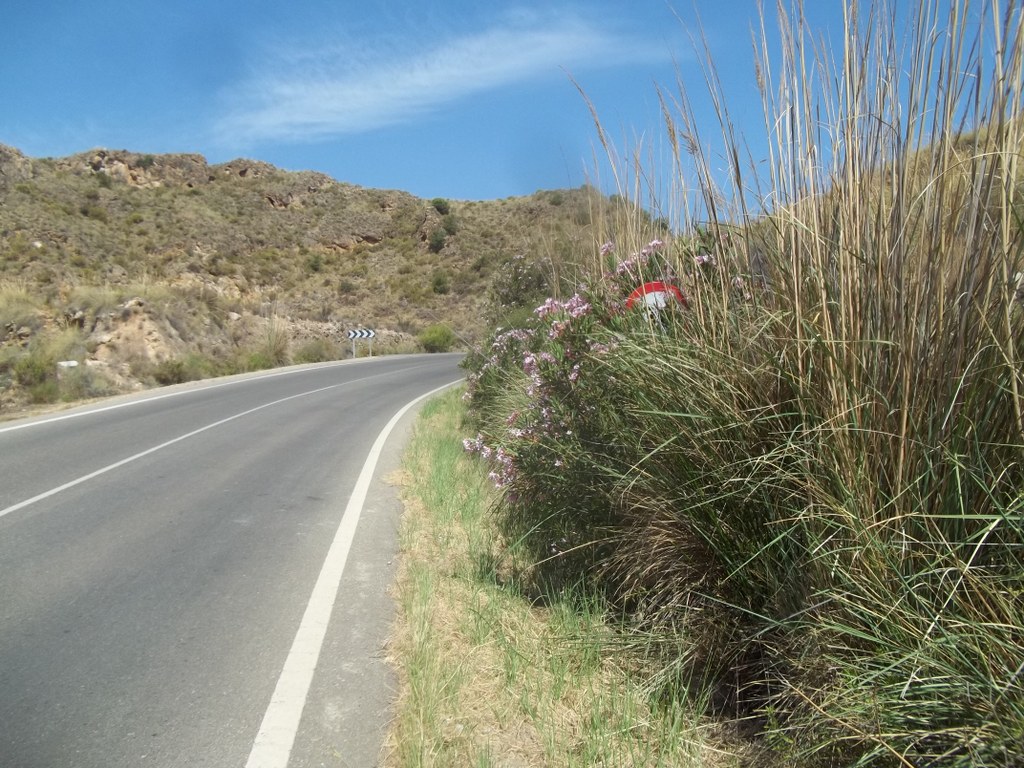 The Interior Minister and the DGT have been working on new ways to cheer Spanish drivers and - as they wait to see if their French counterparts are strung up by incensed Gallic chauffeurs after that country's motorists were obliged since yesterday to carry a breathalyser kit in their sandwich-box at all times - they have for the moment contented themselves with dropping the speed limit on ordinary roads to ninety. To make it more fun, the signs are sometimes obscured and hard to find.
Now whether this speed sign on the way to Bédar reads ninety or thirty three and a third can only be discovered by driving there yourself.
Go on, it's a pretty little village, with no hotels or playa, and just the one cop.
Posted by Lenox at 11:31 PM No comments: