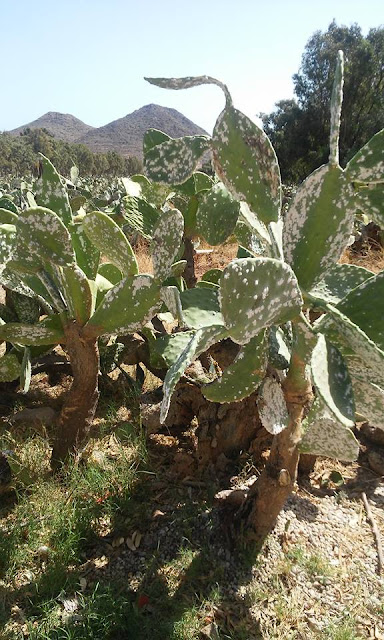 The Cabo de Gata is a beautiful and untouched area outside the city of Almería. You may have to pass through some plastic farms to get there, but once in the tiny villages of Pozo de los Frailes or San José, the charm kicks in with a vengeance. Small restaurants and bijou hotels, a port in San José, a mixture of fishermen, retired Spaniards and odd-looking hippies in old vee dubs and on bicycles. The surrounding hills are free from any intensive farming and, apart from the odd decorative windmill, are simply green rolling hills. The whole area is carefully protected by the agency of the Medio Ambiente.
Just through San José, there is a untarred road that leads to the fine and untouched beaches of Los Genoveses and Monsul, the former chosen as the top beach of Spain 2015 by Antena3 (here).
Unfortunately for the region (part of the larger Parque Natural de Cabo de Gata - Nijar), one of the many things the environmentalists fail to do is look after the chumbo cactus, the nopal, the prickly pear. They say that it is an invasive plant (ratified by Royal Decree Nov 2011) and, as such, it is not within their remit to care for its protection. The picture here is a glimpse of a large plantation of the cactus, taken just behind the prizewinning Playa de los Genoveses. The bug in question is the tiny cochineal fly, which lifts off in its millions at night, to uncomfortable effect. The infection, the sticky white stuff, is carried by birds. It is slowly wending its way westwards towards Granada and Málaga.  The plants do not recover although the roots seem to be OK: fresh shoots are soon consumed by the pest.
The Medio Ambiente also has a large park just outside Almería City, 14 hectares of land with an exhaustive collection of local trees, shrubs and plants, with walkways and ponds, called El Boticario. The park was built with European funds and the Medio Ambiente has been trying to offload it to the diputación (County Council), or the Town Hall of Almería, ever since completion in 2005. There are no takers.
The result, the park is dying. The cactus (hello, I thought they were 'invasive') are infected, as are a number of other plants. Nothing appears to have been watered or pruned. The smaller flora has long since dried up and died. (A return visit to the Boticario: Spanish Shilling, June this year, here).
There is a push to change the law regarding the status of the prickly pear, whose infection has damaged much of the hills and plains of Murcia and Almería, and we can only hope that it proves successful. Soon.

The Ascent of Old Mojácar 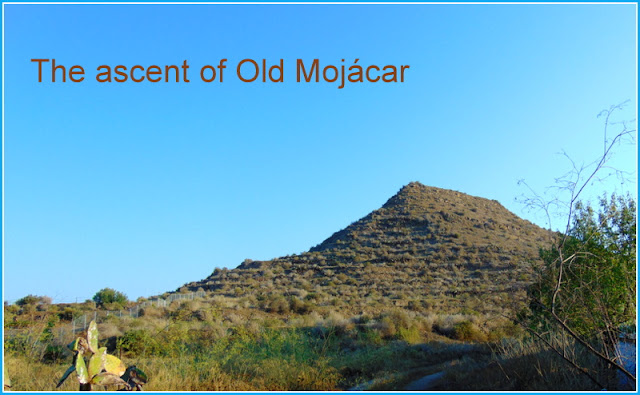 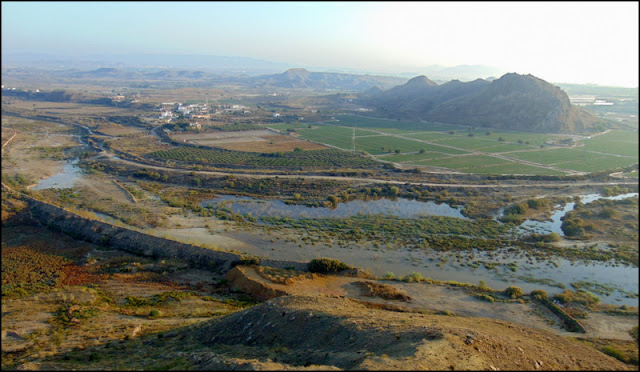 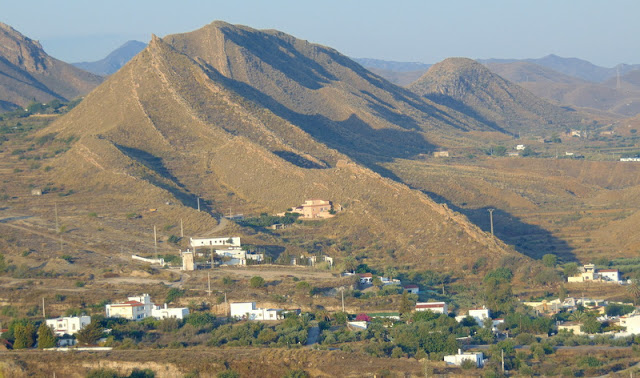 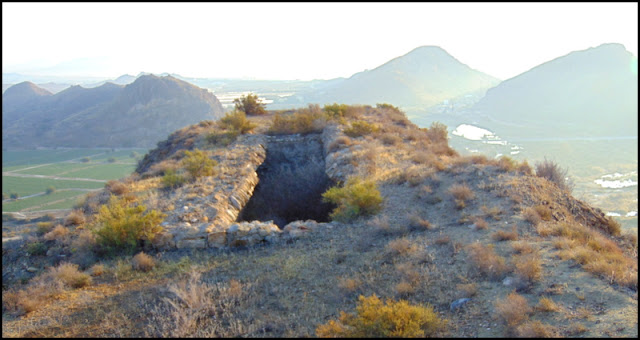 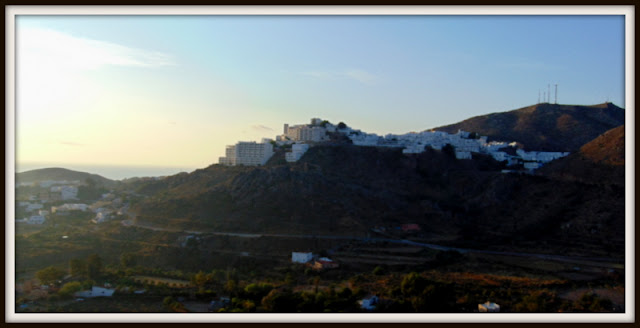 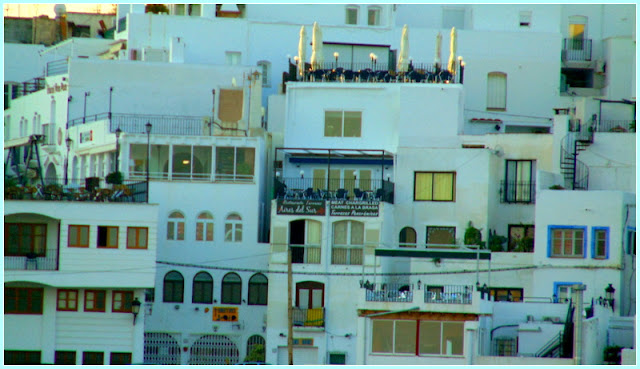 Mojácar Could Have Been a Contender...


There’s not much acknowledgment of history in Mojácar as a rule, so we’ll gloss over the first few thousand years of the town and arrive, breathless, in the times of the Mayor Jacinto Alarcón, in the early sixties.

That perhaps modest wave of artists, the Indalianos, mainly from Almería (a city surprisingly wealthy in culture - you can see some of their work today in the Doña Pakyta Museum in downtown Almería) had been and gone: weekending in Mojácar, drinking and painting. They had introduced, or at least, promoted, the local stick figure, which they called after themselves – the Indalo.  Mayor Jacinto, in charge of a moribund village, had been glad to receive them, and he allowed them to stay in a few tumbledown houses. He instructed the artists, the poets and the writers – go and tell people about our town. By about 1962 Mayor Jacinto had an even better idea – to give away ruins or land to those who would fix them up (bringing sorely needed wealth into the community).  Many came, and the town, with less than 600 inhabitants in 1960, began to slowly revive. A small hostelry, the Hotel Indalo, opened in the Plaza Nueva, and, with its bar and first-floor restaurant, it thrived. Some mojaqueros, living in Lyon, Barcelona, Frankfurt or Madrid, heard of the new growth in the pueblo, and they returned.
The foreigners came. They found the village to be a thing of beauty, and above all, cheap. A house in 1966 would cost five hundred or a thousand pounds. A glass of beer, a few pesetas. They brought with them the habits of the swinging sixties: the Beatles, free love and a stick of hashish. The mojaqueros learned of these things as they began to find lots of work in the construction industry. The unexpected introduction of the Almería airport (Franco never liked the province) and the Mayor’s skills at Court bringing us a Parador Hotel in 1964 helped immeasurably. Mojácar was on its way.
Mayor Jacinto was strict, insisting that houses should be traditionally built – with small windows, flat roofs and whitewash. No high-risers and everyone to have a view. The rules were broken by the first hotels, the Mojácar, the Moresco and on the unexploited beach (land at one peseta for ten metres, no takers), the Hotel Indalo. The tour operator Horizon had discovered Mojácar and made it its flagship resort (before going spectacularly bust).
Mojácar’s fame grew abroad. The Indalo was often seen in London and Mojácar became a small phenomenon internationally. More foreigners came and a couple of local families began to take over the local economy. They became very wealthy. By 1990, they were multimillionaires –and friends of the mighty.
Everyone lived together more or less agreeably (as they still do today in Turre): the money was all foreign and it kept on arriving, ending – sooner or later – in local pockets. As perhaps it should. Mojácar itself, with the old mayor’s retirement in about 1978, began to change from a residential town to a tourist resort. A Corsican businessman knocked down the village carpentry in the square – a squat building connected by arches spanning the narrow streets on either side – and built a three story nick-nack shop called Sondra’s. The first ‘democratically elected mayor’ (the foreign population of course couldn’t vote) also allowed the rest of the main square to be demolished, including a beautiful theatre, and a furious scramble of more nick-nack shops appeared on the three levels of the ‘Multicentro’: tee shirts, beaded wrist bands, pottery from Nijar and junk jewelery from China. The old hotel, the Indalo, that decrepit but key building that commanded the square, was similarly demolished for even more ‘souvenir shops’.   On the beach, the Pueblo Indalo was built. The town had decided that tourism brought in more money than resident home-buying foreigners. Tourists spend heedlessly and then they go away; home-owners stay (and perhaps vote, or try and compete in jobs and businesses). Old Jacinto’s call for ‘Mojácar, where the Sun spends the Winter’ was, for some reason, ignored and the town became very seasonal. On the construction side (where the real money lay), small apartments, good for a couple of mildly uncomfortable weeks, were built rather than comfortable villas.
By 1985, as local homes were demolished and rebuilt to architects’ designs, the village had begun to change from ‘a beautiful Moorish clutter of cubist homes’ to a slightly ugly town with narrow streets and a wonderful view. The foreigners themselves continued to enjoy Mojácar (although its fame abroad was vanishing), and many chose to live in La Paratá (on a high mountain overlooking the beach, ridiculously British), or along the beach itself, still at apparently ludicrous prices. Mojácar was a fine place: there was no Sky television and the only news came from the World Service of the BBC – far off and, beyond the fluctuations in the daily rate of exchange, of little interest.
The second mayor (third really, the age of ‘mociones de censura’ had begun) was Mayor Bartolo, a PSOE man who had worked in the Turre Caja de Ahorros. Bartolo was – one way or another – influenced towards the new president of the Junta de Andalucía, Manuel Chaves, and, inspired to make Mojácar a modern town, he brought back an architect called Nicolás Cermeño, by chance Chaves’ nephew, to rebuild the old Mojácar fountain – La Fuente.
It would be the beginning of the end of Mojácar and its easy cohabitation.
Remarkably, an open meeting was held in the Town Hall to discuss the plan for a new tourist fountain to take the place of the old public one. The mojaqueros were against the idea – one of them, José María (carpenter and undertaker), gave a famous speech about how he had seen enough marble to last a lifetime and he was against an austere gray marble fuente. We all agreed. 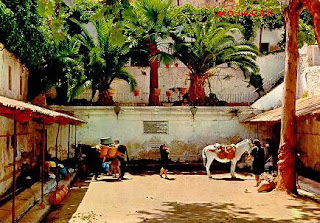 Work began a few days later.
The foreigners were aghast. An early copy of ‘The Entertainer’ (the English-language newspaper) has a picture of a local Brit holding a placard which reads ‘Ninety Thousand Pounds to Wash my Knickers?’ (the reference being that, in those days, the fuente was used by washerwomen as a laundry). A few days later, the foreigners made a demonstration in protest against the outrage. They were (unwisely) led by an American actor and long-term local resident called Charles Baxter (who lived openly with his Spanish boyfriend) together with Silvio Narizzano (whose sexual perversions in Hollywood and London were palpably well-known locally, as was his artist and playwright boyfriend Win Wells). I was warned by Antonio, a local friend, ‘to keep clear’. It was well that he told me, because the foreigners, amassed in the main square, were set upon by the mojaqueros and a fight developed. Eventually, the Guardia Civil arrested Silvio (later to be freed: ‘unshackle that man’, said the mayor standing outside the Town Hall. Silvio gave him a large bunch of roses and a kiss). Shortly after the event, Charles Baxter – the gray-haired dapper doyen of the foreigners – left Mojácar for good. 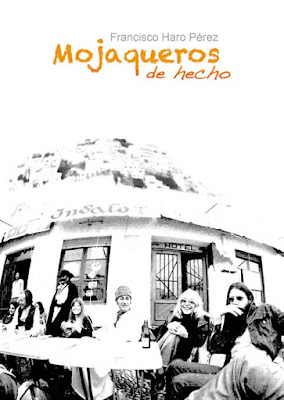 The mojaqueros had the last word – we don’t like the new fuente but it’s for us to complain – not you. The relationship with the foreigners was broken.
A few months later, Bartolo used the same architect to ‘remodel’ the Castillo. No one complained.
...
Years after (in 2014), a local man called Francisco Haro, the son of the old owner of the Hotel Indalo, wrote an astonishing homage to the early foreigners who had brought Mojácar back from the brink of ruin, a fully-illustrated book called ‘Mojaqueros de Hecho’ (Honorary Mojaqueros). Tales of Fritz the mad artist, Charlie Braun, Bill Napier, Paul Beckett, Ulf Dietrich, Ric Davis, the Polansky brothers, Salvatore, Geri, Theresa and many more who brought wealth, fame and fun to the area. The book was completely ignored by the current Town Hall which has, at best, an uneasy relationship with the guiris. These days, and despite the 60% of foreign inhabitants (more or less, depending on the vagaries of the town hall padrón), Mojácar is considered officially as a seasonal tourist town.
Posted by Lenox at 12:46 PM 1 comment: