The Beach Bars of Cadiz 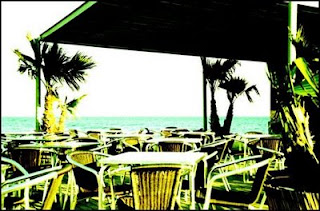 ‘The ecologists are coming…’ – it sounds like something out of an Alan Arkin film about the Cold War. ‘Egermency, egermency, please to leave the beaches’ shouts the Russian submariner in his bad English.
But what could be upsetting the good people of Chipiona, in Cadiz?
Well, the evil and insane boogers from ‘Costas’ ( a shadowy organisation similar to SMERSH, dedicated, in this case, to the downfall of Spain’s tourist industry and The Way of Life as We Know It), has ordered the demolition of a famous land-mark on the Playa de las Tres Piedras on the Atlantic resort of Chipiona. The Bar Eduardo, a chiringuito, a structure built on the playa where you can get a cold San Miguel and a bowl of pescaito – fried fish – is to be knocked down, for our convenience, after being there minding its own business since 1967. The owner, we read in the socialist pro-government newspaper El País, is philosophic: ‘Well, we are a historical part of Chipiona, but the laws are there for us to obey’, he says. Poor deluded Eddie – who makes these laws up? Gods or humans? In his case, since the Dirección General de Costas has swung this 1988 law about any structure on the beach being illegal into overdrive, the chiringuito must be moved 100 metres inland. Eduardo is re-building, and his new bar, gushes the article, will cost him 127,000 euros which the 66 year old must borrow from the bank. Well, there goes the retirement in Miami, mate.
Costas is contenting itself this year with scouring out any structure on the Cadiz coast, but the rest of Andalucía should tremble, Malaga, Granada and Almería are next.
So concerned are both President for Life Chaves and his doomed-to-lose-every-election rival Javier Arenas, that both have spoken out in favour of a little comprehension from the zealots. ‘Our chiringuitos’, says Chaves, 'as long as they maintain the proper standards of excellence’ (cue hoards of inspectors and paperwork), ‘are a traditional attraction to our beaches'. Javier Arenas added his voice against 'this intolerable crusade' against our beach bars which are 'part of the identity' of our coasts.
But no one fucks with Costas…
Posted by Lenox at 6:40 AM