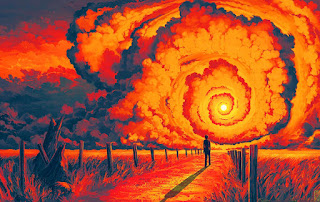 This may be because I’m getting older, and it’s just a subjective opinion, or it could be that the meteorologists, climate scientists and environmentalists are right: global warming is occurring and, on first impression, that’s not good.

The record high temperatures reported this year at the poles must be a concern. All that ice melting into the sea can only mean that, sooner or later, the coastal cities are in for a nasty shock. It’s starting already with Venice, and perhaps we have seen those mock-ups of London, the Netherlands or Seville under water.

And really and for true, using less shower-water; or putting the plastic bottles in the right-coloured trash-container; or cutting out the inconsiderate use of ear-wipes, are all very commendable things to do, but at the same time – it won’t make an atom of difference. The major polluters: the oil companies, plastic container-users, the coal burners, those who chop down the forests and those who sell us the SUVs – none of them will slow down their drive for profits – even if it kills them.

Recycling – the great panacea to our industry-encouraged over-consumption – is more of a chimera that a reality. Did you see that mountain of unsold clothing dumped in Chile? Did you think that plastic can be melted down and used again? The Chinese don’t want our old plastic bottles or the sun-bleached sheets from the invernaderos anymore. How about those accidental fires over at the vehicle and tire-dumps?

Spaniards are worried about the climate-change which they are experiencing, but they are not necessarily prepared to do much about it. No one accepts a higher tax on petrol, or to eat less meat, muchas gracias.

We put up with not getting a free shopping bag from the supermarket – as we load all of the heavily wrapped-in-plastic products we took off the shelves into a cloth-bag. Who are we fooling here?

Those of us who are older must worry for our children and those that come after. We think that they won’t have it as well as we did: even if they can afford an air-conditioning system.

This latest heat-wave we have suffered in Spain – where baby birds fell from their nests – apparently half-cooked – in Córdoba, is said to be nothing compared to what is coming in the years ahead.

Most of Spain is on a high-plateau. The coastal bits are relatively benign, but the inland parts of the country suffer temperature extremes. Ándujar (Jaén) has just reported a new June record for Spain, at over 44ºC. Last year’s August 14th record of 47.4ºC in Montoro (Granada) still stands for the moment.  The World Meteorological Organisation says that this heat wave just settling down now was around 10ºC hotter than the usual for this time of the year in Spain and France and furthermore, ‘is a harbinger of things to come’.

Together with the fires (another sad record in Zamora this week with 30,000 hectares burned), the polluted lagoon at el Mar Menor in Murcia and the generic desertification, we are indeed facing an uncertain future.

Summer, by the way, began on Tuesday – what we just went through, that was Spring.

All of a sudden rainy Galicia is looking like the best option. Then again even here it is much drier than 20 years ago, and a tad warmer.