Did We Just Lose Our Vote? 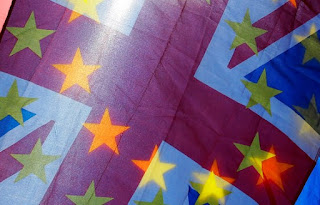 There's a big fuss going on in expat circles (or at least, there should be) about a news item saying that the European Court of Justice has ruled on a case in France regarding the remaining voting rights of the British residents living in the EU.

The ECJ ruled on Thursday that the British, being non EU-members following Brexit, have no voting rights within the block.

In Spain, there are some bilateral agreements allowing votes in municipal elections for a number of countries. These include several Latin American states (but not all), plus Norway, New Zealand, South Korea and - for some impenetrable reason - Trinidad & Tobago.

With Brexit, the Brits lost their vote in the European elections (not that any continental MEP was going to speak for the 800,000 or so Brits living in Europe), but, we were assured, we would not only keep our vote in local ('municipal') elections, but would be able to continue to run as a candidate. 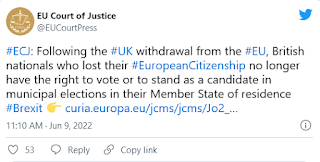 Indeed, despite the fact that most foreign residents don't tune in to their local municipality, there are a modest number of foreign and even a few Brit councillors here and there in Spain.

Now it would appear, if the ECJ authority takes precedence over any bilateral arrangement, that all non-EU foreigners - not just Brits - would lose whatever modest suffrage that they had enjoyed since 1999 (the first municipal elections in Spain where foreign EU citizens, including Brits, could vote).

The problem is obvious. If the town hall must choose discrepancies or squabbles between voters and non-voters, it's clear which way they will go. Why waste time on people who can't vote for you - or indeed, against you?

The question is whether this is a storm in a tea-cup, or the future European policy.

The next local elections will be held in May 2023. We need to know: will we have the vote.

One Spanish friend wrote - give us back Gibraltar, and we'll let you keep your ballot-paper. Ah, if only it were that simple.

However, from El País on Friday: 'The EU justice rules that British residents have lost European citizenship with Brexit. The ECJ clarifies that UK citizens cannot vote or be elected in municipal elections'.

Now we need to hear from the Ministry of the Interior.

It's likely that nothing will come of this... unless Vox gets into power of course.