I was reading one of those noble and irritatingly pious posts that often seem to pop up on Facebook, tenderly placed there by someone who, while short on original ideas, nevertheless feels the urge to receive a small number of 'likes' each morning with his breakfast cereal.

The subject was the number of steps one should profitably make during one's day to ward off heart-attacks, gout and boils on the ankles. This number, says those who know, is 8,000. Eight thousand steps, count 'em: one, two, three... and continue.

I have a cheap mobile phone among my possessions. It has a direct link to Facebook so that I too can post those occasional inconsequentialities that catch one's attention, along with the kitty pictures.  The phone is of the Chinese persuasion (and none the worse for that) and it comes with a number of useless apps, like a direct link to Amazon (for Goodness' sake) and an alarm clock.

It also has a tiny bean-counter within, which counts the number of steps I make daily, saving me the trouble of doing so myself. It errs on the side of caution and reckons I need to manage at least ten thousand shuffles during my active hours rather than the eight thousand recommended by American doctors, or perhaps it's just that the orientals take shorter steps.

In reality, while this is useful information indeed - after all, one doesn't want to keel over while one is raiding the fridge - this service only works when the phone is nestling in one's pocket.

I have found myself more than once walking back to the house to get the phone - not because someone might be calling (I'm retired, and no one calls me any more) - but to allow it to rejoin the count. Plus the steps it evidently missed.

Now, with time on my hands and an empty day to face, it's a wonder indeed that I generally clock up as much as 16,000 paces. My empty day begins as the day-light begins to arrive through the bedroom window (which is why I don't need an alarm clock). I have learned to ignore most of the farm animals, who start their early morning bellow round about 4am, just as I am settling back into bed after the second nocturnal trip to the lavatory. But the dog gets going at dawn, with an endless series of high-pitched yips. She is locked in with the horses and she also needs a pee. 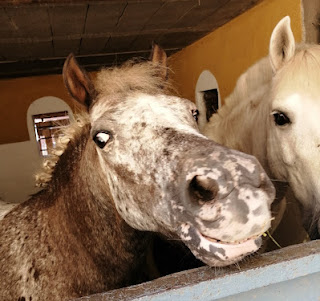 Since I'm soon there - it's around 200 paces away - I also water the horses (there are 35 of them), feed the chickens, the rabbit and the ducks. Then I help Alicia with the feed, the repairs and the usual chores of an active stables. Horses drink a lot, and so I must fill their buckets three times a day.

The phone doesn't care how I get my paces done. I thought that I could perhaps put the phone into a saddle-pocket and let the students pattering around the ring all day help put my score up to stratospheric levels, which could impress the lower echelons of the Chinese Secret Service as they closely monitor my activities through the ether. I could be increasing my count while sitting in the kitchen and eating a sandwich.

Of course, I'm fooling no one but myself with these inventions. I think I'll take the dog (and the phone) and walk into the pueblo and have a beer and a tapa, maybe see how I'm doing.

Thanks for that ! It made us chuckle.
Just a thought...couldn't you use a hosepipe instead of buckets ?