The Moresco: No Takers

Nobody wanted to buy the Hotel El Moresco. It was put up for auction during September but there were no takers. Comically, the local PSOE had put forward a motion in the most recent town hall plenary session to say that the ayuntamiento should buy it, remove the squatters, ream it out (it's a ruin), condition it and re-open - all so that the village's fifty souvenir shops or more could have a little extra action.
Phew, that would have taken a bite out of the annual budget.
The Moresco started out as the Bellhaven, a hotel which was begun in 1966 and never completed. Horizon Holidays (our first package holiday) bought the hulk in 1972 and were then obliged to tear it down and start over. They built a huge behemoth with 294 rooms, great views, a swimming pool and a nightclub, but, er, no parking. 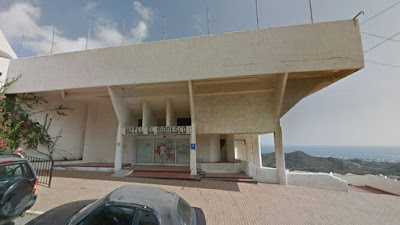 The nightclub was briefly popular with the villagers, as we tried to climb into the underwear of the British trippettes - with some success - while listening to the melodic shrieks of the BeeGees.
With Horizon going belly-up and being taken over by Clarksons in the mid-seventies, the hotel began to lose its lustre and the clients were starting to prefer the beach to the uncertain charms of the village. Most of them would walk out of the front door clutching their towels (and daughters) and would turn left - never once discovering the magnificence of the pueblo, a mere hundred paces away to the right.
A colourful businessman from Madrid eventually bought the hotel, borrowed heavily off it from the Junta de Andalucía, neglected to pay about half a million euros in property taxes to the ayuntamiento, closed the hotel down in 2008 and eventually lost possession of it due to other debts and obligations, passing ownership of it over to the Government of the Community of Madrid which, not knowing what to do with it (or caring) has now put it up for auction - with a reserve of 8,622,500 euros.
The Moresco is huge, and takes a large chunk out of the side of Mojácar. Demolishing it would leave a massive hole; replacing it with apartments would need a huge refit: how much would the apartments sell for, and where would the parking be?
Opening it again as a hotel - well frankly, who would stay there?