Vélez Blanco and the Indalo

It was good to revisit Vélez Blanco on Sunday (the día de turismo, as it happened) and have a great lunch at the Mesón El Molino, one of the province of Almería's top restaurants.
Afterwards, belts loosened, we walked through the streets and up, as one must, to the extraordinary castle which occupies the hill above the town. 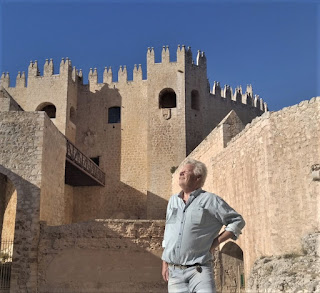 The first time I went, as a child back in the late sixties or early seventies, one had to find some fellow who had the key. 'Be sure to leave it in the bar when you are through', he told my father.
Which, now that I think of it, must be that very same key which graced our mantelpiece for all those years afterwards.
The castle, at any rate, remained closed to the general public for several decades, until the Junta de Andalucía took it over, opening up another route into the fortress, and put in a small shop selling Indalos and other memorabilia: yes, Vélez Blanco finally got itself a souvenir shop.
The Junta has fixed up the inside, and it looks quite splendid. There are several large rooms in good shape, and splendid views in all directions.
Around a hundred years ago, some agent travelling around looking for statues and other items to buy (or steal) and sell to the Americans, came across the castle, which had spent some time as more of a country house than anything else, operated at the time by a down-at-heel marquis. From the old fellow, in exchange for a few pieces of silver, the agent took the interior patio from the castle and shipped it to the New York Metropolitan Museum of Art (where it can be seen to this day).
The lady in the shop (entrance free) told me that the Junta is planning to put in a copy of the original.
The town is under the impression that the Indalo comes from a collection of prehistoric drawings in a nearby cave, where a number of stick figures can be found, and a half-hearted effort has been made to decorate the area with a few cast-iron Indalos and other totems in case the lacklustre tourism picks up (Vélez Blanco is without doubt the most beautiful town in the province of Almería, but it has no beach, no hotels, no night-life and it gets bitterly cold there in the winter.). 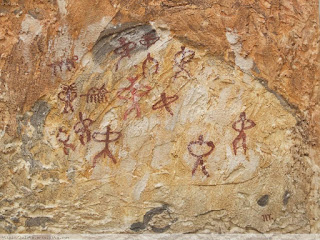 Recently, a historian called Clemente Flores published a book called Vida y Milagros del Dios Indalo which stated that the original Indalo, the famous stick-figure named after the Indaliano artists' group from the 1940s, was painted in the rooms of various abandoned houses in Mojácar by one of the artists who was living there in merry artistic squalor. Not so old after all! The mayor Jacinto Alarcón enthusiastically adopted the figure as the symbol of Mojácar ('where it has brought good fortune to the people for hundreds of years' he would say convincingly to all who visited), a condition it enjoyed until the early nineties, when a senior politician from Almería called Tomás Azorín declared it as the provincial symbol. Which is why, Best Beloved, you can see the Indalo anywhere in the province, except in Mojácar (what was the deal, anyway?), where we now enjoy a sort of drunken Indalo figure instead.
To get to Vélez Blanco, take the motorway towards Murcia and switch to the other motorway heading to Granada at Puerto Lumbreras. Vélez Blanco is just past (and through) Vélez Rubio, another fine town to visit (there's a 'bull-fighters bar' in the main square next to the cathedral).