I was lucky enough to be invited on Monday to the Sappers Patron Saint’s Day parade at the Spanish Legion Engineer Battalion’s base ‘La Brigada Rey Alfonso XIII’ in Viator, Almería. The saint is San Fernando. The invitation had come from Andrew Mortimer, who teaches English to the officers (a vital language for any NATO commander). Indeed, Andrew is known to many British families in Almería as he brings officers to stay with them in their homes for a week improving their English while learning about sherry trifles and how one really makes a sangria. 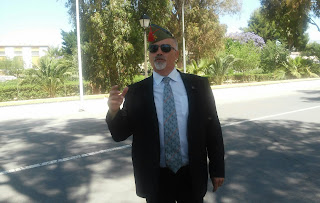 There were ten of us invited on to the base. We were taken by Andrew (he’s known as Andy), who was in a jacket and tie and wearing a legionnaire’s cap, to the museum, a fascinating building with memorabilia from ‘La Legión’, which was founded by an eccentric one-armed and one-eyed commander called José Millán Astrey in  1920. The museum holds uniforms, flags, paintings, and an alarming number of guns, pistols, mortars, mines and other bloodthirsty souvenirs of service in the Rif, in Lebanon, Afghanistan and elsewhere in the past hundred years. We heard that Millán Astrey didn’t approve of smoking or drinking, so the squaddies – during the Civil War – invented a concoction called Panther’s Milk: which held lots of white spirit, mixed and hidden with condensed milk and a twist of gunpowder.

The long walk across to the parade ground – Viator also houses regular army units (soldiers are known as ‘pistolos’ by legionnaires) – took us past tanks, personnel carriers and an old Legionnaire’s land-rover to the stands where we were to receive the Salute.  In the event, around three hundred soldiers marched briskly past us, formed into ranks, as the commandant took the inspection and issued some ribbon. The musicians played as Christ on a Cross was carried past reverently (but fast: the legion likes to go at 120 steps per minute). Finally, the mascot for the Spanish Legion was led past, a magnificent white goat.
The Legion is known to be tough. Their motto is ‘Legionnaires to the fight Legionnaires to the death'.
We met some of the officers for a drink (wine, thank goodness) after the parade. They all spoke good English, a tribute to Andy’s hard work.
Posted by Lenox at 7:51 PM