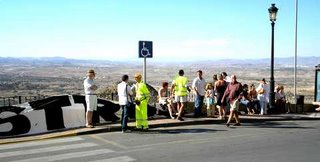 There was a protest on today over the proposed parking-centre for Mojácar pueblo. No one came.
It was a nice warm day, and although the organisers – Salvemos Mojácar – had attempted to cover their backs by warning that observers would be taking names, the fact was, the protest was a failure.
They usually are in the pueblo, which likes to complain noisily but keep a weather eye on the political fall-out of any public commentary. One never knows, does one?
Previous protests in the village included one years ago against Bartolome Flores’ destruction of the old fuente, when the foreigners took it into their heads to carry banners through the square. I remember one fellow, clutching a notice that said ’90,000 pounds to wash my knickers’ getting beaten over the head with his own placard by a mojaquero who told me afterwards – ‘yes, we are against remodelling the fountain, but no foreigner is going to tell us what to do’. So – what's the plan, José? Stand at the back and look slightly indignant.
Quite – the old ‘softlee softlee catchee monkey’ approach.
Another memorable march, when Rosmari, now the current leader of the PP, first switched sides from the PSOE to the conservatives back in 1993, thus ending Bartolome’s reign in the town hall. A handful of people gingerly traipsed up the hill with ‘Rosmari, devuelvame mi voto’ banners (Gimme my vote back).
The protestors’ arguments are probably specious. The view from the village would be the same from above the parking-centre as from El Mirador. Extra parking could mean (a drum roll) extra cars: more tee-shirts and humourous ashtray sales and more comfort for residents. It could, of course, if they built more offices and shops there, also mean the opposite.
Salvemos Mojácar and other local protest groups have had some success in slowing down the developers’ dream of a new and decidedly scruffier Marbella. The frightful Hotel El Algorrobico – apparently one of seven hotels, fifteen hundred homes and a golf course – has been stopped dead. Not, perhaps, knocked down, demolished, raised and returned to the original dust, but, ‘stopped’ at least.
The twenty-storey hotel is now a political chestnut, and has put the socialist Junta de Andalucía, town hall of Carboneras and the Ministry for the Environment at loggerheads. It’ll cost a fortune to knock it down, but it is palpably illegal. Perhaps some magnificent compromise will be reached – a hostal for sub-Saharan immigrants or a home for battered mothers. Perhaps it will just sit there and rot.
The pressure groups and local protestors want a return to a simpler life. No argument from me on that score, except for the small problem that going back in time is impossible. I would certainly like to drive about on the beach rather than inching forward, trapped in a column behind a cement lorry and the Wally Trolley. I would prefer to park in the village square than half a kilometre away at the bottom of a dusty hill. I prefer the old days when there were no beggars or accordion players. Put me down for twenty five Peseta beers and kind Swedish girls.
Mojácar needs sensible dialogue towards where we intend for our town to go. Orange boiler suits and whistles aren’t helping.
Posted by Lenox at 9:13 PM