Mojacar is one of the Most Beautiful Pueblos in Spain. I have to say, I don’t know why: maybe it's an accolade you pay for.

The village itself is certainly dramatic, with white cubist houses (almost all of them new or rebuilt in the last twenty years) and narrow streets. The streets are too tight for cars, and the donkeys have all gone. There is little or no graffiti, which is a point in its favour, but there’s a gigantic hotel of 294 rooms which, from certain angles, takes up a large chunk of the view, and has been closed since 2008. It belongs to a private bank from Madrid which occasionally puts it up for auction. 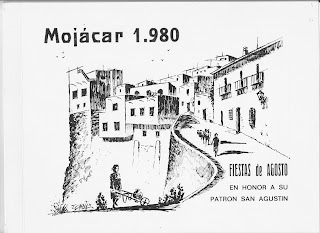 Moving up to the main square, La Plaza Nueva, we find El Mirador, a viewpoint which is the roof of an unfinished building, meant one day to be the new town hall. It’s covered in tables, and served by three different bars. On it, there’s a square box, which will become the top of a lift-shaft.

The view is of the ‘Valley of the Pyramids’ as the Tourist Office grandly (if erroneously) calls it. The nearest thing to a pyramid being the hill of Old Mojácar, now seriously and permanently disfigured by enthusiastic archaeologists searching for the mummified remains of Walt Disney. The diggers have meanwhile found evidence of a ninth century fortification, along with a few shards of pottery and a hash pipe. Even the Tourist Office, which claims that Mojácar was once, in Greek times, known as Murgis Akra (taking us back an extra two thousand years) must realise that we are losing more than we are gaining by burrowing into the venerable old mountain. It was never a settlement, despite some temple buildings, for the obvious reason that there is no water there, its indefensible, there’s no place for the animals, and there’s nowhere to run… unlike the mountain half a kilometre away we now know as Mojácar (or its Moorish name of Muxacar). As to its age, I once found a Roman coin there dated from AD200, a thousand years earlier than the subject of the current dig.

Mojácar is, I think, dramatic. It has harsh colours (much prized by artists): the blue of the sky, the white of the architecture, the brown of the mountains and the red of the sunburned tourists. The village certainly has its attractions – beyond the innumerable souvenir shops with large picture windows, the neon bars and restaurants and the amusing ‘running man’ exit sign up past the church.

Placed there, no doubt, just in case the Moors suddenly return.

The Fuente area at the bottom of the village is not worth more than a glance, and no doubt the judges for the Most Beautiful Pueblo in Spain were whisked smartly past the large urbanisation down there.

The beach, where ninety percent of the population resides (more properly described perhaps as ‘the coast’), has its pros and its cons, with a nice sea-view, low two or three storey buildings interspaced with a few massive hotels, and a large number of beach bars which have universally moved away from the temporary structures of yesteryear equipped with a fridge, some cold beers and a fresh sardine or two being scorched on a hotplate.

The narrow beach-road, built for a rather quieter time, is now to be reinforced with a second road which will cut through the urban growth behind the Front Line, and allowing further speculative building: as the municipality turns into a metropolis. 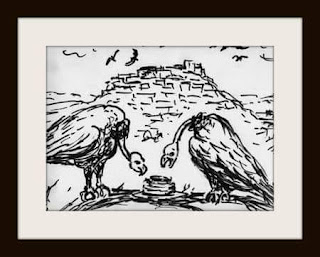 Mojácar was a poor village, in a poor province, and there is little sign of architectural excellence beyond the drama of the glorious tangle of cubed homes (painted white in the mid-sixties by order of Mayor Jacinto). It was briefly a bohemian place for foreigners and Spaniards alike to hide from reality, but later it became a place for tourism, urbanisations, hotels, get-rich-quick-schemes and family politics. If massive walls had to be built, or hills sundered, or land expropriated and promises broken; then, in the name of profit, so be it.