An odd article from The Conversation looks at the end of the nation state. The thrust is that digital nomads might live in one country, while working for a business based in another. They see themselves, we read, in a sense at citizens of – and loyal towards – their employer rather than anything else. They even have a (so-far pretend) country to be citizens of: Plumia (frankly, I haven’t got a clue what they are talking about – although the people behind the concept are a travel insurance company). We, er, wish them well.

Digital nomad visas are an increasingly common idea, with a list of countries (including Portugal, Germany, Malta, the Czech Republic and Croatia) green-lighting the system. Furthermore, in many cases, you are your own boss – but, one must beware of ‘burnout’ apparently. 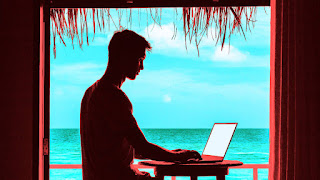 To many of us living as expatriates, particularly if we are retired, nationality is little more than the passport they gave us, and the bother of acquiring another one (particularly in Spain) is not worth the hassle (that, and nobody is going to believe it anyway).

Being a member of the EU was (or is) certainly a plus for expatriates who came from one of the 28 that was.

But largely, and the recent sad passing of our Queen aside, many of us don’t become too tearful on our Nation’s Day or keep our country’s flag flying bravely from the mast above the bougainvillea.

The Spanish see themselves more as regionalist than nationalist – and perhaps the EU’s mistake was to be a union of countries rather than a union of regions. It would certainly ease some of our squabbles if we took that further step – perhaps we will one day.

A quote from the Plumia people: “We’re all enrolled into this automatic subscription based on the coincidence of our birthplace or our heritage, and that really doesn’t work in the 21st century”. This is a business-based observation, but, I think, it is appropriate for the expatriate too – there are after all, a lot of us.

Another fake country, Tabarnia, actually has a physical presence. It is the conservative version, more or less, of the urban parts of Catalonia. Tabarnia, was a joke from 2013, almost forgotten since, until Isabel Díaz Ayuso was chosen last week as its new ‘President in Madrid’.  As Miguel Charisteas says on YouTube: ‘the fantasy is strong this season’.

Then there was the recent successful meeting of the flat-earth society in Barcelona.

So while the local neighbours of the un-anchored are not entirely comfortable with their new vecinos with ‘Digital nomads clashes with local culture’; but then, didn’t we always brush the locals the wrong way?

Perhaps we would do better in the Metaverse.