Events in far-away Afghanistan are disturbing: an old-fashioned cult of fundamentalists, who are against women, abortion, euthanasia, homosexuals, schools, miniskirts and democracy, have taken over the whole country in just a week.

It makes one think - could the Vox (a fundamentalist group with a similar ideology, tidied up a bit for those nostalgic for Franco) do the same thing here in Spain?

No one appears to have been prepared, which is profoundly odd. It certainly caught-out those who think that a sling-shot isn't as powerful as a bomb, or that a Book can be beaten by Western Thought. Presumably, the Afghans knew that the allies were pulling out and that the Taliban would take over. Apart, or course, from the huge majority of people who live in the country and, as always, didn't have a clue. I don't suppose they have the Internet or the Pashtun equivalent of The Daily Express in Chaghcharan. Perhaps they thought it would be a good thing anyway - their own destiny rather than that of some gum-chewing invaders. Isn't life odd.

But there are still chores that must be done: the animals need to be fed, the women stoned and the crops watered (and in the Afghani case, turned into opium).

Such were my thoughts yesterday as I picked a large and amiable country-rat out of the chicken-feed and sent him on his way. Luckily my wife doesn't read my stuff - she doesn't speak English - so the rat has some more days of fun and toil to look forward to before we must put out the poison.

The chickens had managed half-a-dozen eggs between them since the day before. Unfortunately, I have become a little tired of eating eggs over the past month of holidays and our riding-classes (and egg-buyers) are still a week off.

One of the tasks before us - as of yesterday - was to acquire a new bombproof pony for our younger riders. We have a school located just outside Almería City catering to riders of all sizes, prices on request. So, we took the car out of the garage, washed the dust off it, and headed off to a village in Granada where the Duke of Wellington has a major estate - the gift of a Grateful Nation following the Napoleonic Invasion.

Perhaps the Taliban will give Donald Trump a chunk of land for him to build a mansion on and to be be quietly exiled to - for services rendered.

Driving up from the coast, we passed the frontier pueblo of Fiñana on our right. Fiñana is a sad place. It has a population of around 2,000 souls (it was 5,000 a generation ago). The citizens spend their time, whenever they find themselves near a window, looking out at some 120 gigantic aerogenerators - those giant windmills that spin all day (and perversely wink either red or white lights all night). These generators bring electricity. I read that one of them can power 500 homes. There are currently nineteen of these parks in Almería. Just crossing into Granada - the first time we've been out of Almería in over two years - we saw a second enormous clutch of 130 more of the windmills located on that enormous plane south of Guadix.

So why is Spain's electricity so expensive with all these machines that can reach up to 100 metres in height working on the free energy provided by the wind? Huh? Would the Taliban or Vox approve? Shouldn't we be using candles? 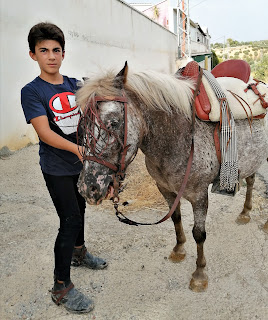 After getting to Granada, we were obliged to rely on another example of modern tech, in the shape of a rolling map on the mobile phone which would, we hoped, bring us to our destination: a small farm in the hills some 20kms beyond the city.

As we arrived, a small boy was heading off - at some speed - down the road on the back of a pony. On his return, we saw the animal for the first time. Beautiful, said Alicia. Ugly as hell, I mumbled into my mask.

Granddad tottered out and said the boy had grown and now needed a horse. We duly crossed his withered palm with silver.

So now we must return in a couple of days with the trailer to pick up our new friend, who will no longer be called Manolito, but will now answer instead to Appy.

I can only hope my friend the rat approves.