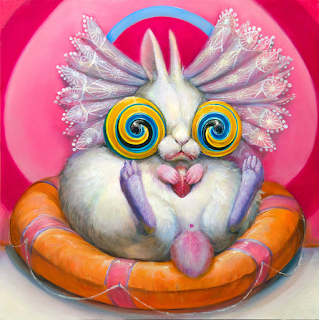 We are in that small space between Christmas and New Year (complicated slightly by the Spanish who insist on celebrating the Twelfth Night followed by school the following morning). We must face the disappointment of not winning a farthing on the Christmas lottery last week, together with the gloomy certainty that we also won't win anything on El Niño (drawn on January 5th), with a sense of inevitability, especially when we are repeatedly shown on the TV the people who won vast sums on their chosen numbers waving uncorked bottles of cava and looking just like the people did on the TV last time around. God, they are so undeserving.
I haven't enjoyed Christmas much this time to be frank, possibly because I was tricked by the calender hanging next to the computer (turns out it's from 2018) and so I missed the first day of December, and in consequence, my customary shout of White Rabbits, which brings - as readers will know - guaranteed perfect luck for the entire month.
And horrid misfortune if you forget.
My wife Alicia broke her leg on the first day, and has been in bed ever since. The national health, usually so good in Spain, was not up to scratch, and she had to wait ten days in hospital before she had an operation. So, she is running (a poor choice of word) ten days late on her recovery. I reckon it'll be San Valentín before she can get on her feet for rehabilitation and horseback riding both.
Amongst other disagreeable tasks, I have been obliged to take over the cooking.
This involves me receiving instruction called from the front room - Alicia is in the sitting-room supine on the couch - as I clumsily break eggs and stir the rice. Our diet has never been so varied.
The horses need attention as well: straw, oats, grain and so on, plus the shit duly shovelled. I have help for this, so don't have to get too down and dirty. Just an artful smear of poop on my cheek, and maybe a wet trouser-leg for effect.
I had asked for a small pension from the indulgent Spanish government back in February, but, as 'things from the palace move slowly' (a local axiom), I still haven't taken my seat on the gravy train a mere ten months later. In short, fourteen years of running The Entertainer (the precursor of The EWN) between one thing and another hasn't paid at all well.
Other misfortunes... well there were a few, but nothing which will survive into the early moments of January, when I shall be found standing on the roof, bellowing White Rabbits at the startled neighbours!
Posted by Lenox at 1:15 PM