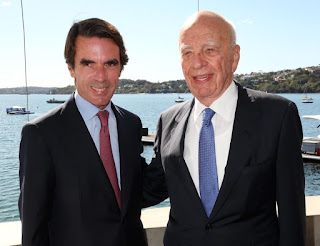 Imagine if Rupert Murdoch, the right-wing champion and defender of both Brexit and Donald Trump, the owner of Fox News, the Times of London, The S*n and dozens of other influential far-right newspapers and TV channels, were to pick up some major Spanish daily newspapers to add to his collection.
Working with his star employee and lobbyist José María Aznar, the one-time president of Spain, the naturalised American mogul is currently in talks with RCS Media Group, the Italian owners of El Mundo (Spain's second newspaper) and is also looking at acquiring shares in the august ABC newspaper.
The main Spanish newspapers aren't already far enough to the right?
They will be.