More Bad News for the Priors

It's a well-known story, how almost ten years ago, Len and Helen Prior watched as a bulldozer operated by the provincial representative of the Junta de Andalucía knocked down their house in a quiet area outside the town of Vera (Almería). There weren't any particular plans for the location, it wasn't on a motorway, or a landing strip or a sewage station or a beach or a rare plantation or in a beauty spot or on a flood plain. It's just a quiet area behind Vera. There are a few other houses there, and ten years later, they are still all there, just as they were then.
So what was the point?
It certainly had an effect: untold millions of euros never made it to Almería, which then, in 2008, had an unemployment rate in the mid thirties - about the highest unemployment of anywhere in the whole of Europe. The Junta de Andalucía, which is so anal that it knows to the exact head how many sheep there are in the territory (seriously, they're all microchipped), airily suggested at the time that there were some 300,000 illegal properties stretched across Andalucía - all built while someone, everyone, was looking the other way... at least until the cheques cleared. 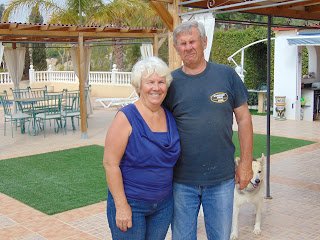 Ten years later, there are still a few court cases - even a few mayors or planners being sent down (always from other parties than the PSOE, of course). As for the home-owners, who often had an illegal house with no water or electricity, well, they could usually go and whistle Dixie.
A lawyer called Gerardo Vásquez, an association called the AUAN, the international press and a number of other concerned people put some dents in this astonishing situation, and the Junta de Andalucía's legislators eventually came up with a new Spanish word to describe these homes: 'alegal' which means neither legal nor illegal. Illegalish, perhaps. So much the better. A climb down indeed. In a recent case, the mayor of another non-socialist Almería town went to jail... but the houses were allowed to stand. Empty, vandalised and useless, but justice tempered with mercy was seen to prevail.
The Priors, almost ten years later, are still living in the ruins of their home. This of course is very contrary of them, since they should have long since slipped away back to the UK to be forgotten.
They live in the garage (unbelievably, it was on a separate deed and thus escaped the demolition), plus some sheds they've built, and surrounded by their garden and their swimming pool which also escaped the attack.
Vera Town Hall was declared the guilty party (it was run by the Partido Andalucista at the time of the events described) but the Priors never received compensation.
Now, as the authorities continue to ignore this atrocious attack on Len and Helen's civil rights, we hear that the Town Hall is now claiming some 24,843€ in legal costs against them.
Len says he'll go to jail before he pays.

Disgraceful, how anyone can get away with this in Europe is beyond me. In some despotic place with no law you might be excused for saying what do you expect when there is no rule of law. Those involved will never hang their heads in shame. Good for Mr Prior for standing up to these bullies.

Unbelievable, just unbelievable! The Priors are such delightful people, how can this be allowed to continue? The Spanish Government, the Junta de Andalucia and Vera Town Hall should all be hanging their heads in shame, and sorting out proper compenstion forthwith! The Priors did not have an illegal property, it had all the necessary permissions and licences issued by Vera Council. How were they to know that Vera Council should not have issued those licences?