Looking a Gift Horse in the Wallet


The richest man in the world – sometimes, when he isn’t ousted to second place by Bill Gates – is Spain’s Amancio Ortega. He is estimated to have 71 thousand million euros as of November last year. (His daughter Sandra has another 7,600 million). Sr Ortega’s wealth comes from his Inditex fashion group, best known for its chain of Zara clothing and accessories retail shops (Wiki). He started pretty much from scratch in around 1950 after leaving school at 14 and finding employment in ‘the rag trade’; his father a lowly railway worker. He opened his first Zara shop in 1975.
Inditex itself is doing exceptionally well, with El País reporting that ‘Inditex, the group that owns chains like Zara, Oysho or Massimo Dutti, recorded a strong rise in sales in its first fiscal quarter, from February to April. Specifically, they stood at 5,569 million euros, up 14% on the same period in 2016. This led to its profits rising: the net result amounted to 654 million, an increase of 18%...’. 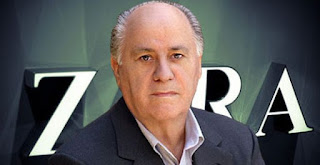 Amancio Ortega has recently captured the attention of his countrymen after he ‘...donated 320 million euros specifically for the acquisition of 290 pieces of oncology apparatus. It is one of the largest philanthropic donations ever made in the country. According to a statement by the Amancio Ortega Foundation, the charity set up by the billionaire in 2001, equipment would “allow more accurate diagnoses and provide patients with less aggressive, more effective and shorter treatments."...’. (From Newsweek here). However, not everyone was happy.
‘Why do we reject the infiltration into public health of Big Business and wealthy magnates? Asks Nueva Tribuna here.
El Mundo reports that some public health associations say that the gift should be returned, as ‘We aim towards adequate financing of our needs through a progressive tax system that redistributes resources prioritizing public health’, rather, they say, than through a gift which  – while a huge amount – is small compared to the 1,256 million in dividends earmarked to go to Ortega from Inditex this year.
So, for Sr Ortega, perhaps the donation is a small thing: perhaps it is an exercise in self-promotion or a sop towards his creative tax activities. Should we accept such largess? Perhaps a better question might be – shouldn’t we encourage it?
Posted by Lenox at 6:51 PM