The Sun Has Gone Out

Here’s where we are, and our apologies for another Brexit-related editorial. Michael Howard – a past Leader of the Conservatives and an ex-home secretary under John Major – suggests (no doubt in jest) that Britain would go to war against Spain over Brexit. Mrs May produces her walrus-laugh for the cameras, Spain is appalled by this political gaff and gunboat diplomacy, the British residents in Spain are understandably alarmed, and Gibraltar is stuck (forgive us) between a rock and a hard place. 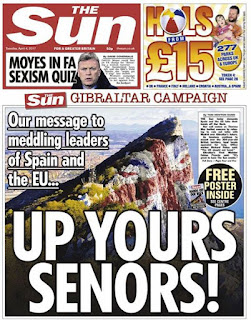 Now, Spain wants Gibraltar – that’s no secret – but it’s not stupid. It has offered a joint sovereignty with the UK, giving Gib full access to the EU – or failing that, it would consider the colony to be outside the borders of the European Union and would, simply, close the gate. It has never suggested ‘invasion’, so Michael Howard needs to be robustly disciplined by his boss.
One Spanish commentator we like suggests that Spain keep Gibraltar... and give the UK Benidorm instead.
The United Kingdom, of course, is interested in trade. Brexit was about closing down everything else, but never trade. The UK inexplicably hopes for the same amount of trade with the EU as it currently enjoys – but it won’t get it without a price.
Well, we know that Spain wants Gibraltar. It will also – out of pique – put a spoke in London’s wheel by relaxing its opposition to a second referendum for Scotland. Fine, what else does Whitehall have to discuss in the next two years? What, in short, of the other twenty six EU states?
Holland might want the British to consume more drop; Germany would like that 1966 goal disallowed; France apparently wants London to negotiate with Brussels in French (Heh!). We all know what the Republic of Ireland wants and maybe, for all we know, Romania’s proposal is that the British need to drive on the other side of the road by 2020. Maybe Portugal wants a larger slice of the fisheries and Greece wants its marbles back (so, for that matter, does Michael Howard).
You can’t fight all of these wars, Mrs May, not if you want to keep the trade in place.
Posted by Lenox at 10:01 AM