The Old House in Norfolk 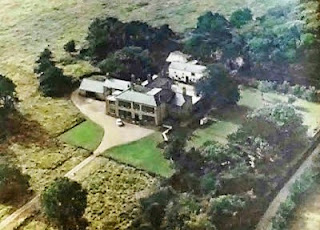 About the last thing I expected to be doing last Thursday was to be sitting in a bar in Villaricos with a visiting British couple, reminiscing with the husband: without doubt the only person in the entire world who would be familiar with my old childhood bedroom.
You see, it was his, too.
I was born in a large crumbling mansion in Norfolk in 1953 and spent the first thirteen years of my life, when not at a British prep school being beaten for neglecting my Latin, living a carefree if lonely life in the house and grounds of the family pile.
Both were extremely large. The house had thirteen bedrooms - not all in a comfortable shape, since eleven of them were empty - and it sat in a park of fifty acres, which it shared with a number of cows. The nearest building that wasn't, in some way, beholden to the 'Hall', was at the edge of a village about two miles away. The local policeman would regularly fall off his bike into the ditch rather than see my parents driving home in an erratic fashion from the nearest public house at some time after 'Last Call'.  In return, he got a crate of whisky for Christmas. In fact, now that I think of it, perhaps this explained more his lack of balance on the bicycle rather than his passion for noblesse oblige.
I had no siblings, and hardly any playmates. The house was far away from any neighbours and surrounded by a large park. In Norfolk in those days, besides the dearth of other local children, the fact was that they, as well as being within a comfortable radius, also had to be deemed appropriate to mix with a young gentleman like myself.
This whittled the final list down, I think, to six.
School, while providing more children of an age and accent similar to me, was not a solution, since I preferred books, hated football, and was known to all as 'a solitary type'.
When I reached thirteen, and was on the cusp of being sent to a public school (even worse than a prep school, since the bigger boys at 18 were, in fact, grown ups), my parents sold the house in 1966 and sensibly moved to Spain, a place where there was no class system, and where the policemen preferred brandy...
On a flying visit back to England, they auctioned the furnishings with the help of the local vicar (during, I have to say, a drunken stupor: some odd bits being later sent in a large box to Spain, including a three-legged chair, an empty crate of whisky bottles and a broken bicycle pump) and left word to sell the roost, which eventually went to a family of whom I know nothing beyond the name - Leggett.
Many years later, when my father was gone to His Reward, I briefly toured Norfolk with my new wife, Barbara. We had come for a memorial service in the tiny Saxon church which stood on land we had owned. My father had given the church to, well, The Church, and in return, the diocese had agreed to allow a memorial plaque to be affixed in the nave, 'when the time came'.
We drove through those narrow Norfolk lanes that summer day in 1987, and where the old house had stood for several centuries, all that we could find left was a large pile of rubble. The Leggetts, it appeared, had been obliged to sell the park and the house to an avaricious gravel company who later mined the entire area, the Saxon church by now resting on a tiny island, apparently providing much of the gravel that lies under the M27. The preservation order on the house being no match for an unattended digger with the motor left foolishly running...
Here comes one of those odd things that happen to make life interesting.
The son of the Leggetts, a boy who spent ten years in the same house as me, who slept in the same bedroom as I did, now lives forty years on in France.  Like any expatriate of sound intelligence, he has a poor view of the Brexit nonsense and, while posting something scathing the other day on Facebook somewhere, found a post of mine nestling just above his own.
I duly got a message (the wonders of the Modern Age): 'Are you the one who...?'
For once, being called Lenox was a help.
My bunk-mate was coming to Spain and would be staying in Villaricos, the beach where the Americans mislaid a few nuclear bombs back in 1966, around the same time that my parents were settling into Spanish life.
Villaricos is about ten kilometres from Mojácar, where I live.
And so, last Thursday, we met over a few beers and a remarkable number of fresh sardines.
And we talked about the old house where we were both brought up...
Posted by Lenox at 8:17 PM