We went to the pretty little town of Frigiliana in the hills above Nerja (Málaga) for a short break last week.
I had looked for a hotel with a swimming pool and found one prominently displayed on a Google search for the town. I booked for three days and after a remarkably short drive - the motorway between Almería and Málaga now finally completed - we were soon checking in. The hotel overlooks the old part of the town, a maze of narrow streets and pretty views - a sort of gentrified Mojácar, and the two pueblos are in fact both members of the 'Beautiful Towns of Spain' club.
The clerk at the desk told us where everything was, including 'nuestra piscinita' - which sounded ominous - our lil' ol' pool. Turned out, the swimming pool was more of a baño, with a sign displayed saying that the maximum occupancy was, erm, six. That's a pretty good photo of your pool you've got on the Internet, guys, it looks Olympic!
Frigiliana is great, and compares well with Mojácar - except for the obvious lack of a beach. The architecture is richer, while the planners have been careful to not allow any eyesores. Their arches, openings, incongruities, charms, courtyards and passages, stairways and public gardens, are all in perfect shape and blend harmoniously with their neighbours. There are no nick nack shops but rather, a number of boutiques (the former, by the way,  have their stock delivered by mayoristas - wholesalers, who sell them any old schtock that sells well, while the latter must go forth to find their wares - or indeed make them up themselves).
OK, there's a fly in the Frigiliana ointment - a walley trolley does the rounds with three little gaily painted carriages drawn by a fake train engine built in Italy. The vessel is driven apparently by one Rafael (the hotel clerk may have been a relation).  Cheesy. 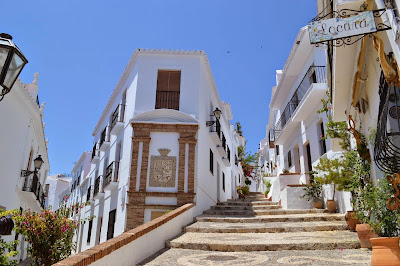 The public looked a little wealthier than the usual Mojácar guests, or to put it another way, they had evidently spent more on their tattoos and - as is presumably always the case, were happy to show them off to the rest of us. At least, the spider web elbow fashion was less visible there,  but nothing I saw made me want to rush into a parlour, drunk, to disfigure myself for life in a burst of low self-esteem.
The food was good, with a variety of restaurants, including a Polish place called Sal y Pimienta with a good selection. The ethnic waiter - heavily tattooed in the best Post-it style - was  mildly disapproving as I ordered a Polish vodka (good stuff).
Since the agency that, via Google, asks me for a rating for their hotel, I should probably mention the dysentery I caught from something on my visit - maybe the Polish sausage, or perhaps the suspect breakfast tortilla back at the lodgings. Whatever it was, it's taken four days of high temperature, aches and a spectacular number of visits to the dunny to overcome.
Still, that's travelling for you...