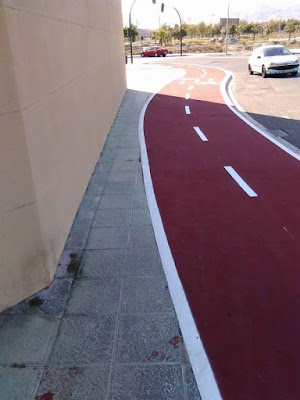 There seems to be a cycling mania going on.
Yesterday, driving around Mojácar was almost impossible with little gaggles of tourists en bicicleta peddling inexpertly around the beach. Later in the autumn and winter, we shall have the pelotones of professional racing cyclists in giant groups scooting along in front of us (peddle faster, dammit!) as we drive to Turre or Los Gallardos on important business. Meanwhile, the local Town Halls are building more and more cycle paths (at the expense of pavements and vital parking spaces), which - as far as I can see - few cyclists use, preferring the street.
The planners at Almeria City Hall, and I quote my other blog The Entertainer Online, '...are allowing skates, skateboards and oddly, wheelchairs, on their bicycle lanes which now infest (70kms built so far) the city'. The idea is to give preference to pedestrians and bicycles over motorised traffic within City Limits.The idea in Mojácar, I suspect, is to promote tourism as our main source of income despite any inconvenience to those who live there. Luckily, it's too hard a pull for any but the toughest cyclist to make it up to the top of the hill (...and arrive in Souvenir Heaven).
Posted by Lenox at 10:12 AM