Mojácar was an Artists Town

Mojácar was 'discovered' by artists. Until the 1950s, there was little to be said about the town. It had fallen into obscurity and there were few people left. The population was numbered in the hundreds and the rest had gone away, either in search of work, or through political problems following the Civil War. A film crew descended on the village in 1953 and shot part of 'Sierra Maldita' (short video here. Mojácar appears from Minute 3). There was no road to the village in those days, and the crew parked in the river-bed below and mounted the hill on donkeys.
The village was in ruins. Those who left would disassemble their homes, selling the iron rejas, the beams, lintels and woodwork. There would have been no chance to sell the house, no takers. An abandoned home in those days was a ruin open to the elements. 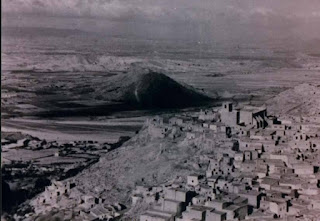 The artists came during that decade, a group from Almería who called themselves 'Los Indalianos', after the Almerian Saint Indalecio. They found a local totem here, the little Mojácar man, an inspiration to any self-respecting artist, and so named it after themselves, and that's how 'El Indalo' was born. They painted portraits of the local people, paintings of the town and the sierras, and were inspired by the light, the landscape and, I think, the poverty.Their art can be seen in the Doña Pakyta museum in Almería (where the Rambla and the Paseo meet) and is well worth the visit. The Mojácar Town Hall owns no examples of the Indalianos, and has no interest in the subject. Indeed, in the museum in Almería, there is no mention of Mojácar and the 'Indalo' is credited as a totem from Vélez Blanco (yet, in the enormously detailed 27 volume Espasa Calpe encyclopedia of 1920 - there's a set at La Voz de Almería - there's no mention of 'Indalo').
Then came the foreign artists and their companions. Apart from Jacinto Alarcón, mayor during the final Franco years who gave land or ruins to those foreigners who agreed to repair of fix them, little notice was taken of these settlers who brought in the money that began to make the local people wealthy.
Today, we have a remarkably ugly 'municipal art gallery' which shows exhibitions in a desultory way. No one goes. The artists themselves have largely chosen more welcoming villages in the sierras, as these days, Mojácar prefers tourists.