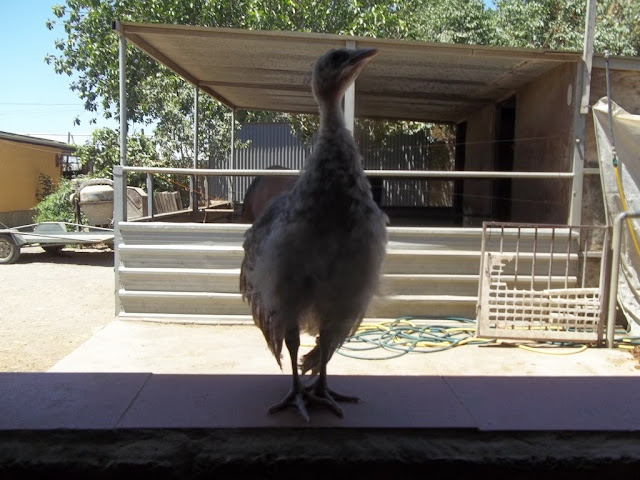 We had gone to Almería to visit a friend with a horse-ranch. Loli keeps other creatures as well, sometimes breeding them, including donkeys, coatimundis, ostriches and whatever this is. After an enjoyable visit playing with the livestock (in the extreme heat of the Almería sun), we turned for home. The car wouldn't start at first, but I was insistent. What was the alternative? Walk?
Eventually we moved off. There's no air in the SEAT, the button has broken. The little electric window control chose the moment to fall from its place in the door to a more comfortable post somewhere inside the door, so we took off with just the passenger window open. The car began to judder and lurch somewhere outside Retamar as I remembered in a rare burst of clarity that, back at the BP station, I had lovingly put twenty euros of unleaded petrol into our old diesel.
Bugger. The car eventually shuddered to a halt on the side of a fast but sparsely used road. How nice that the first four cars to pass were from Tráfico. They helped me put up a warning triangle, squeeze into a fluorescent red pajama top and to find a place down the road with telephone coverage. What was my insurance company? Something beginning with the letter V I thought, or possibly Z. They left me to it. After a call, I discovered the insurance people began with a G, for Seguros Generali. Splendid people, if a trifle slow. They fixed us up with a tow-truck and, three hours later, we were back home, having taken the trip in the cab of a friendly grua with air-conditioning.
It could have been worse. The Mojácar mechanic asked me with a knowing smile: 'trying to speed up the car with sin plomo?' and pumped the offending petrol out of the motor into a handy tank he has. Didn't charge me anything either for the job. Once again the car returned to its normal state of slavish efficiency and the fellow at the petrol station fixed the window controls while we filled the tank.
The bird? That's a peachick.