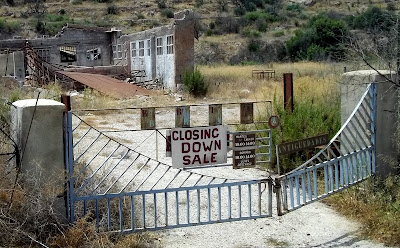 The brush-fire that burnt 2500 hectares of land in Mojácar two years ago has now been all but forgotten. Several houses were lost, some cars blew up, many trees and gardens went in a moment, animals died and, once again, our town had got itself onto the Front Pages for all the wrong reasons. It wasn’t that the Town Hall hadn’t seen the fire coming, although another fire had burnt much of next door Turre’s Cortijo Cabrera only one week previously, it was their lack of useful reaction which should have peeved the local population.

I say ‘should have’ – people here put up with a lot. There’s no room here for complainers. Not if they ever want to see a job again, at the very least. Anyhow, Mojácar is apparently the richest town per capita (if a trifle undivided) in the whole of Andalucía.

Rather than declare a ‘State of Emergency’, our Mayoress was advised to let a visit by the surprise new (and unelected) President of the Junta de Andalucía José Antonio Griñán, come to see his new possessions, turn into a political opportunity to help our local tourism rather than our locals. Griñán, carefully driven ‘the long way’ to Mojácar Playa from Turre, where the schoolchildren had been lined up to sing him something straight out of Chairman Mao’s Little Red Song-Book, missed the burnt-out hinterland of Mojácar. No soot, dead trees or the smell of charred animals for our leader, but rather a plea to help our hotels (run mainly by Catalonian businessmen and with a staff overwhelmingly drawn from ) while sipping a sherry at the Parador. Following the meeting, the Andalucian Media, which receives 200,000 euros a day of public funds in ‘institutional advertising’, was duly told to run a few adverts for Mojácar tourism.

And that was that.

Here at my home, we lost a number of trees; in fact, their dried-out trunks are still falling in the high-winds (two fell earlier this week), and a few outbuildings. The garage lost its roof and the swimming pool its pump and some of the façade. I’m not complaining – the main house survived.

A surge blew all of our electric equipment. I rang the Sevillana and was given the modern version of the ‘Act of God’ excuse, that the surge was ‘fortuito’ and therefore not their problem. Accidents are so often ‘fortuitous’ these days, don’t you think? Does anyone have a CD player, or a spare amplifier?

The water pipes burnt during the fire, but the swimming pool held enough sooty water to help with the buckets. The roots of some trees burnt for days, and a bucket of water down a smoking hole would elicit a loud steamy whoosh.

The local fauna all died. Almost all were burnt to death, including some small birds we saw, as the fire hit, that flew off with burning wings. Not an image to forget. Other animals, our lazy tree-rats, the wild tortoises, the rabbits and voles all died. The wild boar may have escaped, but there are few foxes around these days. I remember, just two days after the fire, as we were beginning the job of cleaning up the house and charred garden, hearing the hunters out with their shotguns, in case any bird might have survived the cataclysm and was unable to hide behind the naked trees. Bang. Bang.

We had seen the smoke approaching in the high wind. A police car had fired its sirens – ‘run, run now!’ and, with the dog and a single picture wrenched off the wall by the door, we had fled the scene. We had met up with some house owners in the riverbed and watched as the hill between our house and the shocked group had suddenly glowed red. We learnt afterwards that one of our neighbours was just about to get into her car to escape the fire when the vehicle abruptly exploded, burning her legs and arms. She was forced to run back inside her house as the fire, borne on an incredibly strong wind, rushed against her home and around the walls, igniting what could be burnt, leaving everything else to smoke and soot. We found our shocked neighbour later and took her to the medical centre on the beach. A dozen fire-engines arrived that afternoon and worked until late in the evening. It was good to see them. We slept on the beach and drank tea.

The President of our autonomous Region wasn’t the only person who never visited our barrio to see the fire damage. The Mayoress never came by either. Not to do anything much, but to at least look indignant and shocked as we showed her the smoking ruins. I think we could blame the first fire, which was obviously not extinguished properly, and the ‘environmentalists’ who were campaigning at the time to save the dead underbrush, as it provided cover for our local wild tortoises.

We were asked to report our losses to an office on the beach, itemised and with photographic evidence. A few months later, a letter arrived from . In the event of my house being entirely and completely destroyed by some act of nature, the Government of the Nation, it said, would be pleased to extend 15,120 euros to build me a new home. Kind of them, we thought, but luckily our house survived (if a trifle scorched).

Wild fires are regular occurrences in during the summer, although this was the first one in Mojácar for twenty years. It was big enough to receive some press coverage. Even our local English-language ‘newspaper’ laconically reported that a British television personality of small standing had been staying on the beach during a fire but was unharmed. Well, it’s not The News of the World…

So, two years on. The fire cost me a few hundred euros in cleaning up and hiring skips for dead branches and other material, but, as the main damage – several hundred trees destroyed, the stables and store-room contents lost, electrical goods fried and a few domestic birds killed:

Well, put that down to experience.

A version of this story, in Spanish, has appeared in the latest edition of our local 'Actualidad Almanzora'.