Oldies but Goldies (a Rave from the Grave)

I saw that Captain Beefheart has died today. Don Van Vliet was a Frank Zappa collaborator and floated around in some of those peculiar albums in the mid sixties. He was pretty bonkers, but was remarked for being able to sing his way up and down four and a half octaves, a bit like Uma Sumac (What, you’ve never heard of Uma?). As Captain Beefheart, he made some records before turning to painting. He lived in the Mojave Desert for the rest of his life, spreading colours. I have one of his records – Mirror Man – and I’m listening to a cut on YouTube. (‘Tarot-Plane’). Bonkers.
Captain Beefheart was the inspiration for ‘The Head-bangers Show’ on Radio Indalo put out most evenings by Martin (or ‘Tino’): I think I’ll call him ‘a gentleman who had fallen by the wayside’. Heavy stuff and lots of vinyl, mix with some fine Moroccan hash and a roll-up. In those days you cut your terbacca and grass seeds or mixed your hash all on the cardboard cover of the record. Try that with an MP3.
I ran a Sunday afternoon show on the same radio, which was based in Mojácar in around 1988 to 1995 perhaps, and would bring up a load of albums and some cassettes, strategically wound to the right song, all in a large sack over my shoulder as I thundered up the Mojácar hill on my motorcycle with Arlo Guthrie sitting on the back. The regular crew would decamp, leaving the radio station at some considerable risk. The program was called ‘The Entertainer Show’ (for some reason) and had some good jingles, plus the occasional participation of Mike Connolly, another Mike, Ric (who did helicopter noises by bashing his chest while reading out fake traffic reports) and Brendon. Antonio, as well: a fan from Bédar who would bring a crate of beer for each show, plus a ham bocadillo for me, compliments of his mum. Sometimes I’d let him do dedications. Towards the end of each two hour show, it would get progressively harder remembering which side of the record to play, which lever to push and what on earth was going on. 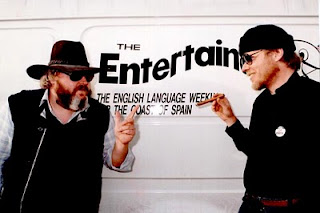 The music would be – at the very least – a cracking mixture of oddities. None of that anodyne best-songs-ever crap which plugs up our ex-pat radios these days in turgid clichés. Horse with No Name, Life in the Fast Lane, Stairway to Heaven and Sugar Sugar. Spare me.
Old Cap’n Beefheart had the right idea.
And now he’s gone: will they let their hair down on Spectrum and play one of his tracks just this once?
L-R Mike Connolly, The old Entertainer Truck and me with a beard and a cigar.
Posted by Lenox at 6:59 PM