It’s a well-known fact that Mojácar in 1960 was in such a state, with only 600 inhabitants, that there was a plan to incorporate the ‘town’ into the municipality of Carboneras. The pueblo was moribund, with anyone remaining considering joining family that had long before fled to France, Catalonia, Germany or even the USA, Algeria, Morocco and Argentina in search of a better life. Franco famously didn’t like Almería and there was no government help for the area. Mojácar itself, was a crumbled down village with no road access until the late fifties: no agriculture, industry, tourism or art. In fact, the first hotel was opened in 1962, a seven room establishment built over the town’s only bar, the Hotel Indalo. We stayed there for several months in 1966.
The town was ‘discovered’ by a few intellectuals (as the Spanish offhandedly called them) in the early sixties and a small group of artists moved in. Good light, inspirational countryside and cheap prices. The town was grateful. Some monies were wired back to the pueblo from overseas. Otherwise, there was nothing. The mayor during the sixties, Jacinto, together with a few ‘forasteros’ (outsider 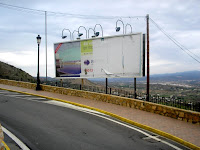 s), began the process of bringing Mojácar back from the brink. He gave away houses to those who would rehabilitate them, promoted Mojácar and its symbol, the Indalo, and, after forcing his subjects to whitewash the brown weather-beaten town, won for the community a prize in 1964 as a ‘Pueblo Blanco’. People slowly came to live in Mojácar and the town grew and prospered. Crass tour-operator politics slowed down Mojácar’s growing reputation internationally as a bohemian destination and the pueblo was forced to squeeze its way forward under the mismanagement of a series of greedy and self-centred mayors. Parts of the town were demolished without reason and an ‘Artisan Centre’ was built with government funds (Mojácar has no artisans). New and odder public buildings have been erected since for political or profit-driven motives. Some of them finally get opened; others merely rot in the sun.
The town still lives from money that comes in from outside. There is still no locally born artists or producers. Only building or service industries stimulated by the ‘forasteros’ and their purses. Mojácar has grown from the 600 inhabitants of fifty years ago to around 10,000 today and there are many summer-homes, huts, noddy houses and garrets built for profit which add to the burden on the shoddy infrastructure during the short summer season. The town sells Chinese-made nick-nacks in endless souvenir shops and the beach caters to outsiders and their money. The mojaqueros have become wealthy. They keep their money safe for the future.
Mojácar’s luck was not that outsiders would want to import so much money, or buy so many homes, or come to live there in large and yet respectful numbers, or even that they would allow the local people to continue to mismanage their town through the ayuntamiento, the town hall. The luck was that it was able to expand so precipitously, long before the introduction of the autonomous government of Andalucía, whose venal politicians based in the capital city, Seville, would make huge efforts to stop any other eastern Almería town from following Mojácar’s example. Thus those interior towns, again without any future, without industry, agriculture or tourism (they are not located on a Mediterranean beach, but rather in the dusty hot foothills of the Sierra María or the Filabres) are unable to turn to the obvious source of building retirement homes and creating local wealth and life for themselves. The Junta de Andalucía not only says ‘no’, but has cynically and disastrously called for the demolition of 12,000 foreign-owned homes in a dozen pueblos. Mojácar has not been forgotten by these thugs however, as the junta’s planners are determined to build a useless, pointless and absurd artificial city of 70,000 inhabitants (no one can even guess where these people will come from) between Mojácar and the surrounding pueblos to the north. The ‘Llano Central’ is like our Artesan Centre from years back. There’s a profit motive perhaps, but there’s no logic beyond greed. Perhaps a strong local government could still turn the tide into a better direction, but the forasteros, who now run to about 75% of the population, sadly aren't interested.
Posted by Lenox at 11:34 AM