A Picture and a Thousand Words 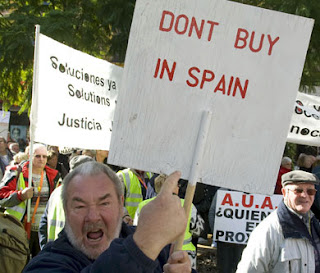 Well yes, you can always find just the right photograph. This rather pugnacious one features in today's El Mundo (Andalucía) and heads a story about the demonstration yesterday in Almería City of a group of (generally speaking) Northern European property owners, whose properties have arbitrarily been classed by the regional government as 'ilegal', which means in English 'lacking in the correct paperwork'.
The properties, generally in out-of-the-way interior villages, were legal enough when they were being built, in fact, the town halls were overjoyed to see the stimulation of their shrinking and moribund pueblos as fresh money poured in creating a plethora of jobs and, indeed, taxes. Yes, here's the paperwork. They were legal enough as well when the promotors flew to strange towns in England and elsewhere to show their videos. They were legal when the local lawyers and notaries and town councillors checked the paperwork and they were legal when the homes were sold (those ones which were completed, but that's a different story).
But, it's the autonomous government which needs to be attended to. Yes, things were fine then, but, they're not fine now. Without the permits from Seville, you can't get electricity. Without the right paperwork, you can't get water. So, many retired people, safely installed in their new homes in Eastern Almería (or elsewhere) are on a generator. Or a hose-pipe. Or maybe, they've just been served demolition papers.
Others we know of (a story I heard again yesterday) buy their home and as the papers are processed, the agent or builder took out a fresh mortgage against the property which, it's so clear, the new and unconscious owner will have to deal with. Still other owners find part of their land taken in legal and town hall supported expropriation for commercial ends (known as 'Land Grab') where the dispossessed owner has to pay for the privilege.
So, while the newspaper may have chosen this picture to make some patriotic or jingoist point, the fact is, despite yesterday's march being entirely peaceful (how could it ever be otherwise?), it is also true that our demonstrator that models this picture has every right to be indignant.
Posted by Lenox at 3:24 PM