The other day, the British Bullfight Club, more properly the ‘Club Taurino Mojácar’, gave a talk at the Vera Bullring. I was joining in to see the building, which stands sentinel on the edge of the city. A rather large crowd was inside playing with the wheelbarrow/bull’s head thingy as I arrived. Shrieks and photographs. It turned out to be a busload from the Imserso old people’s club. From Barcelona or somewhere. The Spanish are great believers in having a jolly time when on their hols. Waiting round the corner near the statue of Juan Belmonte, a bullfighter who gave his last fight before retirement here in Vera (apparently amongst other places), was the rump of the Club Taurino, decked out in shorts and sunhats. The president of the Vera bullfight appreciation club - where there’s a bullring there’s a peña - wearing a wondrous expression on his face (the Vera club is easily eclipsed in numbers by the Mojácar CT), said a few words about how we were all invited for a glass of fino, just as soon as the builders were out of his club, which was undergoing repairs. Mike Hathaway, head, and with his wife Audrey, organisers of the various activities of the club, took over the microphone as we trooped in. Here is where the main gate is, that’s the infirmary and the chapel and so on. There’s a capote (yellow and purple cloak used for bullfights) – see how heavy it is. We all paused to try and lift it. Those matadors have strong arms!
Inside as you enter through the main gate through the gloom and up some stairs passing under one of two arches into the stands of the main arena, as your eyes suddenly adjust to the bright light, you find yourself in a piece of emotion and history. Mike knows a lot about his subject and, by now sat on a cement bench overlooking the plaza, continued with his talk
I’ve always liked bullrings, even the Vera one which is apparently ‘third class’ (to do with its size, not its character). The Vera plaza de toros starred in the final scenes of Antonioni’s ‘The Passenger’ when Jack Nicholson, who has taken the passport of a dead man, lies dying in his room in a grotty hostal, ‘built’ for the occasion just outside the bullring.
I left Mike and his group of aficcionados and disappeared into a nearby bar. It was getting very hot in the bullring, where the primary colours of blue and yellow were waiting to be joined by the red. Sometime in September.
The CTM has an event every Thursday, which is to be commended. There are around 140 members which is quite astonishing, and the club is apparently the only ‘English’ taurine peña in the business, apart from one in London – the Club Taurino de Londres and another in New York 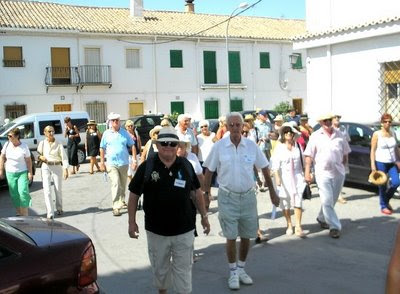 Several weeks after the visit to the Vera bullring, Ángel Medina – the councillor for tourism in Mojácar, organised a trip to Huescar, a small town in Granada, for a tour around the pueblo, lunch, local product-tasting, some serious boozing and a bullfight.
Around 55 of us took the early morning coach-trip and, by 11.30, we had arrived in the town and had wandered into the nearest bar for a coffee. A guide from the tourist office called Juan would take us around the sites, the new and old parts of the town (Christian and Moorish, you could say), through some exotic town-gardens, down narrow touch-both-walls streets and into some impressive buildings, including the ‘Little Cathedral of Toledo, in Granada’, the Iglesia Colegiata de Santa María la Mayor – a church which until recently, was under the tutelage of the Bishop of Toledo. It had taken 250 years to build, starting in 1600 as a gothic church and ending up with renaissance influences. The tour through this church was given by Brother Carlos, a missionary from the ‘Heraldos del Evangelio’, dressed magnificently and supremely knowledgeable on the church and who appeared to be fortuitously between trips to the heathen.
Lunch followed in a large restaurant on the edge of the town, a joint clearly prepared for coach-parties. Most of us had the local speciality – a haunch of lamb. Delicious. We were taken by bus to the tourist office to try and buy local produce, including mead (well, it’s been a while for me. Not since school, I think). Then to the bullring, a modern but arrestingly beautiful plaza de toros in the middle of a quiet street, with just a small entrance to mark its position. 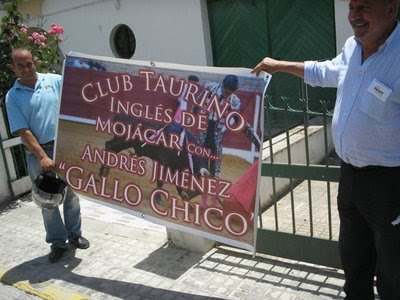 The bulls were ‘novilladas’ – two and three year olds – and the matadors were young fellows, between sixteen and eighteen. We had a large sign announcing our club which we had tied to the rail, opposite the Canal Sur cameras. Well, it’s not every day a party of slightly pink Britons descends on a small-town bullfight. 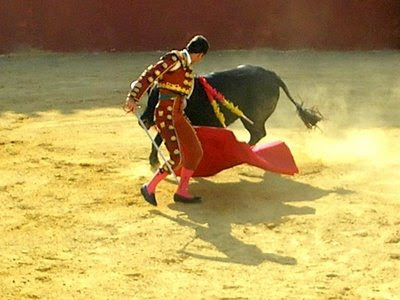 To find out more about the club, go to www.club-taurino-mojacar.com.
Posted by Lenox at 9:48 PM

Always enjoy your blogs, but can't believe you would support this cruel and barbaric torture of animals for entertainment.