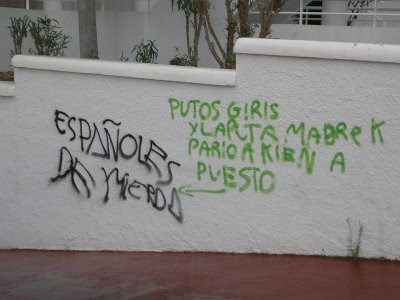 So, it starts in Mojácar. Neither the idiot (presumably British) kid who writes his stupid graffiti, neither the (presumably Spanish) kid who answers: damning all foreigners, neither the town hall (which hasn't bothered to paint this garbage out), nor the cretin who sells spray-paint to the kids: none of them have the sense of a grasshopper.
Mojácar is rare in that there hasn't been confrontation between Spaniards and 'giris' ('Northern Europeans') unlike many other resorts in Spain - starting with places like Torrevieja. Let's not bring this stuff here.
The goverment passed a law this summer that CDs and DVDs should have a small additional tax on them to go to the hard workin' actors and musicians - or rather their guild, the SGAE authors' society which no doubt finds splendid ways of sharing the money around.
So, how about a tax on spray-paint which could go to the unfortunate people who have to clean up the endless and dispiriting daubs of juvenile expression which covers so many walls in Spain?
Posted by Lenox at 6:20 PM

There seems to be a blind spot in the Spanish mentality that ignores graffiti. Most Andalucian cities are, without a doubt, foul inasmuch as the semi literate gorillas mark their territory with graffiti.

Talking of which... I'm not sure what's worse, the racism or the misspellings. Can't stand people who drop the "H" off.

It'll probably get a lot worse before things improve. Racist incidents have always been linked to economic prosperity.