This is the old market in 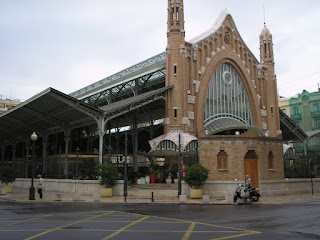 the Ensanche area of Valencia, called the Mercado del Colón. A few years ago it was reamed out and re-invented as a smart café and exhibition centre. It's very nice. No doubt home-prices in the surrounding square have shot up as a result.
On Sundays from 12.00 midday, they have a concert from one of Valencia's brass-bands ('bandas municipales'). On this occasion, the band was a group of around sixty enthusiastic young people who ripped through a collection of cheerful (and presumably local 19th century) pieces of music to the pleasure of a couple of hundred people - surprisingly not more - who'd come to listen. And have a coffee.
The trick to these bands apparently - Valencia has a massive 300 of them - is to see what their final piece is. It's always 'Valencia' but there are two different tunes with this name. One is the Valencia Hymn (all stand and place hand on heart, weeping is permitted) which is the local tune for the conservatives; the other, Valenciaaa (di di dum di dum di dum...) is the tune for the socialists. In the end, to the slight consternation of the fellow who told me this, they played both. 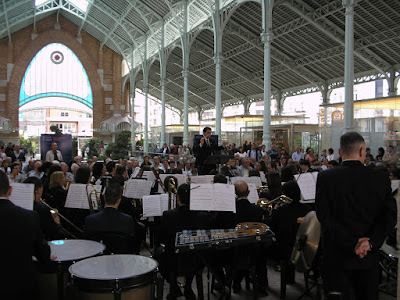 I used to know the crematorium stoker in a large working-class Dutch town. He was eventually driven mad by relatives' choice of final tune: the socialists always wanted Red Morning, while the Catholics could be relied on to request "Whereto, Wherefor? to the tune of Amazing Grace.