English as She is Wrote 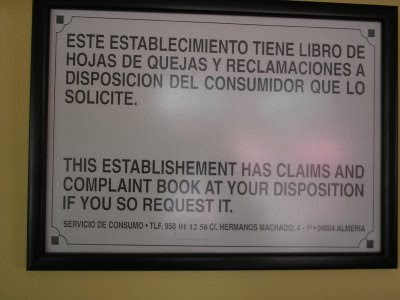 I've written before about how the Spanish would rather get it wrong, or check with somebody's cousin's son (who once spent a week-end in Cornwall), or use 'Babelfish', anything... rather than ask some Briton if they've got the translation, sense or spelling right. Most of us would be willing to help as long as it's not more than a paragraph or two; and there's a million Britons living in Spain (many of whom can read and write), plus a good half million Americans, Irish, Australians and other native English speakers, plus a good ten million trippers from Anglophone countries during the summer thrash, so don't tell me it's very hard to find someone to help, as often as not, for the price of a beer.
This venerable sign has been hanging in thousands of Almería's businesses for at least thirty years (there's an older version in our office, with the previous six digits telephone number). It comes from the Almería tourist and services department. You are meant to display it by law so you can hand out your 'complaining sheets' as necessary.
You see, what happens is, when foreigners read something purportedly in their language, with contextual and spelling mistakes, they often react by not taking you seriously. They think 'yes, they want our money, but, y'know, they don't really give a rat's arse for us...'.
Now, I'm sure that the tourist and services department doesn't want us to think that. Do they.
Posted by Lenox at 12:06 PM