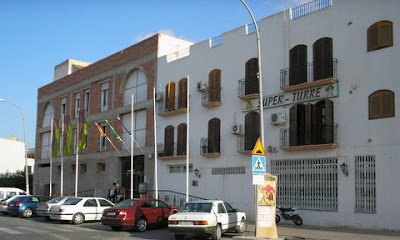 Turre may not be the most beautiful town in Almería - actually, come to think of it, it's probably one of the least attractive of the lot - but, even so, the old supermarket lets the place down a bit. The 'new' wing, on the left of the building, was finished about eight years ago and the supermarket expanded into the newly available space, selling its wares apparently from the moment they put a lock on the door.
But, in my opinion, the building still needs a teeny bit of work on it to bring it up to the standard of the rest of t 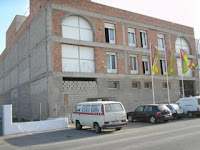 he Avenida de Andalucía.
Has the town hall ever asked the Super-Turre people to just fling a bit of plaster and paint on the exterior to give the building a final flourish? Apparently, yes. Repeatedly.
One story I heard was that a previous ayuntamiento had objected to the bit of roof terrace that sticks up above the skyline and that the ensuing disagreement was with the pesky local lawyers.
Which would neatly explain the eight years and counting.
Meanwhile, civic pride not counting for much in our local communities, the scruffy Super-Turre megastore continues to provide us with everything from yoghurt to Butano to gin to trousers. All, of course, in the best possible taste.
Posted by Lenox at 8:20 PM