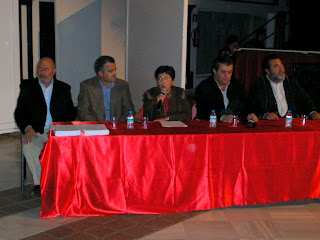 The POTALA - the Plan de Ordenación Territorial del Area del Levante Almeriense, the Junta de Andalucía-driven plan for our future, was the subject of a meeting today at the Centro de Artesanía in Mojácar. The POTALA, and what the town hall is planning to offer to the Junta next week in its disagreement. The table shows, from the left, Angel Medina, Diego Flores, the mayoress Rosa María Cano, the town architect Rodrigo and Carlos Cervantes.

Essentially the POTALA is a plan by the Junta de Andalucía to build a giant city to tack onto the back of Garrucha and to stretch, to the north of the Garrucha/Turre/Los Gallardos road as far as Antas: an extension of 55 square kilometres. Of this, half will be parks and green belt, and the remainer will be 30% homes, 30% hotels (fifty of them to compete with those already in operation locally) and 40% industrial, shops and leasure. What will happen to the owners of this land? Who knows as yet. Perhaps 'land-grab' (where they take half your land and charge you urbanising costs for the remainder). Very wonderful for those who bought here to get away from it all...

Now, the ayuntamiento, together with the other ten town halls that make up the 'mancomunidad', can't do much about this. It was barely mentioned. What the town hall was concerned about is the rest of the package. Essentially, the Junta has taken away Mojácar's right to plan its own future growth. Most of the rest of Mojácar (some of it is in this new 'city') will be green-belt. The sea to have 200 metres protection, a vast 'parque' from La Mata, running below and beyond the pueblo, along the south side of the river-bed, to Turre and beyond, the side above the 'Parata ring-road' all to be protected. In all, of Mojácar's 72 sq kilometres of extension, just 3% will be urbanisable. Ever.

All of this, times eleven (the eleven towns of the Mancomunidad), will be discussed for the final time with the representative of the Junta de Andalucía, in Huercal Overa on Friday 15th of February - although apparently the goon from the Junta can only spare half an hour...!

Next Wednesday, Councillor Albert Schroter has called for a meeting to explain this in detail in English at the Hotel Continental on Mojácar playa at 8.30pm.