'No to illegal Demolitions' - The Result 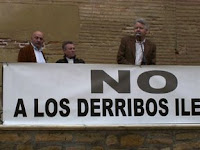 Canal Sur dedicated about ten seconds to it on its evening news. Canal Sur TV (Prop. Junta de Andalucía) noted ‘that about 400 ingleses came along to protest against an illegal house being demolished, (roughly adding in their impartial coverage that) even though the house was thoroughly, completely, violently and appallingly illegal and the peace-loving forces of order, freedom and socialism had been obliged to knock it down’. The cameras couldn’t bear to show the ingleses who were massed on one side of the square so they showed the, uh, 400 Spaniards who also showed up in support.
The Voz de Almería was more generous – estimating the crowd at 1,000 people. They quote me in their full-page spread: ‘It’s not a natural case when the bulldozers suddenly show up at your door after five years of living peacefully in your home knowing that your house-paperwork was all approved by the town hall, your lawyer and your estate agent’. I also go on record saying that buying a house can never become some type of a lottery. El Mundo and Ideal also had full-page coverage of the event.
So – it may have been a day to support an unfortunate family who had lost their house arbitrarily and disgracefully, but, Spain being Spain, it was, of course, a day devoted to politics.
Angel Medina (president of Ciudadanos Europeos del Levante) spoke of the Junta’s intention to implement their own plans for our area, including the 50 square kilometre artificial city planned to be raised between Turre, Los Gallardos and Garrucha, and their intention to take away powers from the local town halls guaranteed by both the European Treaty and Spanish Constitution. ‘This area, with no tall buildings and 85% green-belt, with a population living in harmony and with a good standard of living should be the ideal that other areas should aspire towards’, he said.
The councillor for urban planning for Vera, Paco Vázquez, attacked the local PSOE chapter, which was passing round a flyer that roughly said – in allusion to the demolition - ‘good thing too, keep within the law’. ‘They should at least support their fellow citizens of Vera before yapping to their masters in Seville’ the councillor said. The PSOE wants to punish Vera for being run by the wrong party. Vera is Partido Andalucista; Félix López is the mayor who had turned down the PSOE’s offer to switch to their party just before last summer’s local elections.
The mayor of Vera was not allowed to speak ‘to not enter into contempt of court’ and the mayoress of Mojácar told El Mundo that the demolition was ‘inhuman’. The paper also noted the presence of the mayors of Zurgena and Antas (neither of whom, added the reporter, are from the PSOE).
Even Mrs Prior – most understandably – touched on politics in her short speech of thanks to the people when she said that she would like Zapatero to look her in the eye and explain why her home had to go.
The British GMTV and the Daily Telegraph, both with perhaps their own political agenda to make, were also present.
The AUAN – a home-owners’ association based in Albox, a growing town in the interior of the province - had decided not to send their president as special-interest construction groups in that town had suggested that the Vera demonstration might descend into violence. Which was, of course, a most unlikely scenario. Other members of the AUAN, together with members of other groups, associations and so on, came from Cantoria, Turre, Bédar, Los Pinos and Zurgena to lend their support for the Priors.
The autonomous elections (where, as I note in the Ideal article, the Northern Europeans are not allowed to vote) are to be held in March. The assembled protestors applauded Mr and Mrs Prior and the demonstration achieved its first and most important point of solidarity with the British family. The second goal, to stop future demolitions, will be answered one way or the other in the weeks to come.
Posted by Lenox at 11:24 AM