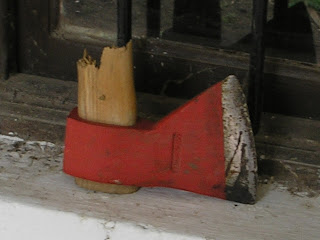 It's hard work this new version of Blogger.
Ahem. About the axe-head. I bought it in a weak moment from a large ferretería on the beach (who everybody who knows, knows who). As usual, it was made in that bit of China that even the Chinese avoid, and after returning home with this thing, and following a couple of healthy swings against an intrusive branch, the neck of the damn thing broke and the flying axe-head nearly brained the dog.
I usually don't use this joker on the beach because he is the old style 'never give a sucker an even break' sort, and most if not all of his stock is rubbish.
Take the plastic skillet that, when I tried to lever a fried egg out of the pan, the skillet actually melted into the mess. The frying pan where the handle fell off (probably the weight of the egg and skillet mixture). How about the garden fork, where the tines bent backwards the first time I stabbed the earth with it. Or the anglepoise lamp with the springs missing (people often wander around the shop looking for bits missing from their own purchase, and they will feel no pain at all as they wrench a fresh spring, cog or whoojumy off of one on the shelf). Then there was the garden trowel where the handle fell off - turned out there was no metal bit inside the handle to give it any strength at all!.
I almost always go to one of the other ferreterias, and come home with reasonably good stock. But this place...
Posted by Lenox at 4:46 PM